Landsat has been observing the landscape of the vast 64,000 square miles of watershed in Chesapeake Bay for decades.

What’s the state of the Chesapeake Bay in 2012?

Unfortunately, the Chesapeake Bay and 90 percent of its title tributaries are impaired. They’re impaired with poor water clarity and low dissolved oxygen, as a result of excess nutrients and sediment coming into the bay.

It’s important to know that the conditions of Chesapeake Bay can be improved. We can restore oysters, blue crabs, fish populations if we better manage our activities on the land.

The watershed that drains into the Chesapeake Bay extends 64,000 miles into five states across North America (New York, Pensylvania, Maryland, Delaware, Virginia) and the District of Columbia. This visualization overlays the full watershed onto a Landsat satellite visualization of the Bay area. The eight different distinctly colored regions indicate the Chesapeake’s major watersheds. This animation highlights and labels each subwatersheds in turn. Credit: NASA

The Chesapeake Bay ecosystem has been described by scientists as degraded. Why and what’s happening?

It’s degraded because of excess nitrogen and phosphorous and sediment that’s draining off the land into Chesapeake Bay. That is obscuring the clarity of the water. The nutrients are contributing to increased algal growth. When those algae die at the bottom of the bay and decompose, they starve the bay of oxygen — oxygen that living resources need to survive.

The sources of those nutrients and sediments are fertilizers, both manure and chemical fertilizers, applied to farmland and applied to residential lawns. It’s also from the exhaust from our cars and air pollution from power plants out in the Ohio Valley.

One of the things that’s contributing to the movement of pollution off the land into Chesapeake Bay are impervious surfaces. These are roads, parking lots driveways, and roof tops.

That’s been increasing because our population has been growing. The population of the watershed has more than doubled since 1950. And just since the origin of the Chesapeake Bay restoration effort back in the mid-80s, we’ve added an additional four million people to the 64,000 square mile watershed. 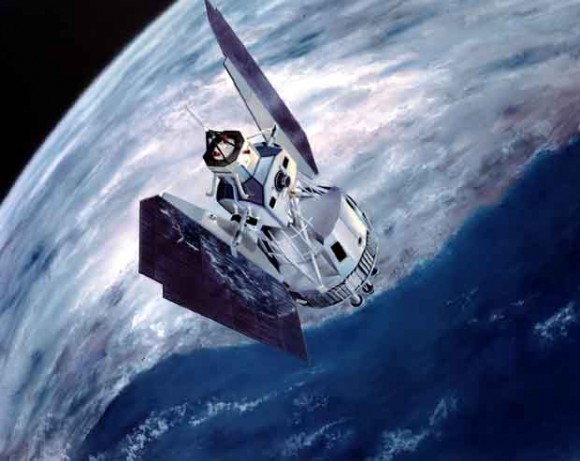 How is the Landsat program of Earth-observing satellites being used to better understand changes to Chesapeake Bay?

Landsat is a critical and invaluable tool for characterizing the landscape and mapping it over time. We have satellite imagery for the Chesapeake Bay that covers the entire 64,000 square miles.

We can use the satellite imagery to track consistently through time across six states how the condition of the landscape has changed and what it is like. This information is not just valuable for looking at sources of nutrients and sediment, but it’s also valuable for characterizing effects and changes and conditions in wildlife habitat and other ecosystem variables.

The Landsat satellite is basically a camera in space. It’s actually seven cameras, because it collects the reflection of the sun off the earth’s surface in seven bands, seven kind of wavelengths. We use this information to characterize different features on the land – such as trees or impervious cover – because each one of these features reflects the sun in different wavelengths. We’re able to take the information from the satellite – basically a bunch of numbers – and translate that into information that corresponds to things like trees and impervious surfaces. Satellites do that consistently across very large areas, which we’re not able to do with airborne cameras or other instruments. 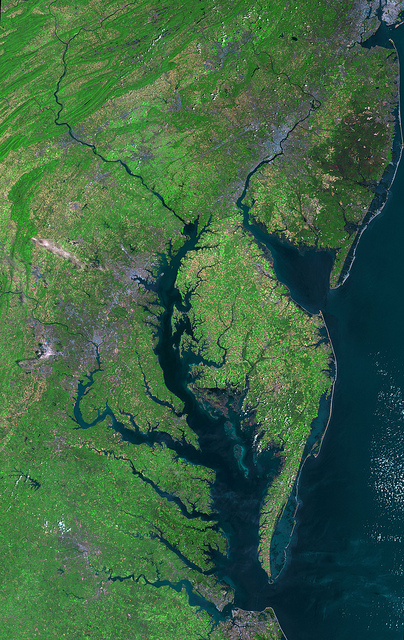 Using six Landsat 5 images collected in July 2009 and 2011 a beautiful, seamless mosaic of the Chesapeake Bay region was created by the USGS Landsat team. The Washington D.C.-Baltimore-Philadelphia-New York City corridor can be clearly seen (look for silvery purple) as can the Chesapeake and Delaware Bays and the coastal Atlantic barrier islands from Fishermans Island, Virginia to Sandy Hook, New Jersey. Image credit: NASA/USGS/Landsat 5

Give us a big picture sense of how this information about Chesapeake Bay is being used?

Currently this information is being used to account for and quantify how much nutrient sediment, how much nitrogen phosphorous and sediment are coming off from all different parts of the watershed.

The whole restoration effort for the Chesapeake Bay is being managed and led by the Environmental Protection Agency which has established limits on how much pollution can come into Chesapeake Bay in order to restore living resources.

It’s being used at the federal and state level to help identify, assign and associate responsibility for addressing different nutrient sources and nutrient loads from different parts of the watershed. It’s also used as a baseline at a more local level, even a county level to understand how much impervious surface there is in the county and where it is.

Can these concepts you’ve been talking about apply to other estuaries throughout the world?

They’re very applicable and particularly in other places in the United States, areas like the Great Lakes, Puget Sound, the Gulf of Mexico. These are all areas where activities on the land greatly influence the condition of the water bodies.

Because Landsat collects information globally, that critical dataset is available for other countries as well in characterizing their landscape. What they may not have is the additional information that’s used to compliment the Landsat imagery to get more accurate measurements of impervious surface.

What can people actually do to limit harmful runoff?

There’s actually a lot that people can do on their property. They can put rain barrels on their down spouts to capture runoff from the roof and store it for a period of time. Then they can use that water to water their garden during dry spells.

Also, people can construct rain gardens on their property. Rain gardens are depressional areas that capture rain water when it runs off. They’re vegetated and underneath the vegetation there’s a porous soil and gravel that can help infiltrate the water back down into the ground water and through the soils.

The plants also in this depression they take up nutrients. They take up some pollutants and they store them in the plant material.

Another thing people can do is put in a pervious pavement. If you have to put in a driveway, you can use pervious pavers and they have even some technologies where that the pavement looks like normal pavement but it also is somewhat pervious, in that water can infiltrate through it. It doesn’t contribute as much to runoff as regular pavement.

What’s the most important thing you want people today to know about Landsat and changes to Chesapeake Bay?

Landsat is just invaluable in providing this baseline of observations for science about how human activities on the land affect water quality, wildlife habitat, and air quality. Without the baseline set of information from Landsat we wouldn’t be able to really understand how sources of nutrients and sediment have changed and where they are in the Chesapeake Bay. I don’t think any large scale restoration effort would be as successful without some means of characterizing the landscape consistently across these broad drainage areas, such as the Chesapeake, the Gulf, the Great Lakes and Puget Sound.

There is nothing like it. And the Landsat program needs to continue, because it’s vital, not just for science and to inform decision making in the United States, but also for our fellow nations.

Listen to the 8-minute and 90-second EarthSky interviews with Peter Claggett on monitoring changes to Chesapeake Bay from space, at the top of the page.