For a few hours around midnight, in Kansas, temperatures suddenly shot up by 10 degrees F. Meteorologists call it a heat burst. Read how it happens.

Decaying showers/storms from western Kansas resulted in heat burst and 40-60 mph winds from roughly 10-11 p.m. through 1-2 a.m. across central Kansas. Ellsworth shot up from 86 to 97 degrees [Fahrenheit] in an hour, and Salina shot up from 84 to 95 the next hour.

The dew point temperatures also dramatically dropped, and winds were extremely gusty. How does a heat burst happen? Read on. 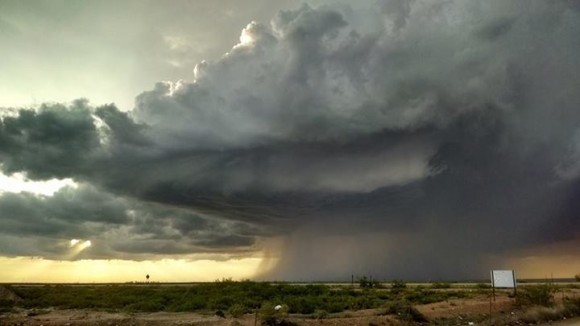 Heat bursts happen when a dissipating thunderstorm produces sudden downdrafts. These downdrafts, sometimes called microbursts, are typically cool. But sometimes they pull very warm air from high in the atmosphere downward, and a heat burst occurs. Illustration via Wikimedia Commons

The heat burst that occurred across central Kansas developed thanks to a decaying thunderstorm. Thunderstorms typically sustain themselves with updrafts, or air rising upward into the storm. Ususally, the stronger the updraft, the stronger a thunderstorm can become. If updrafts no longer exist, the thunderstorm loses the fuel it needs to continue to grow in size. As the storms weakens, it tends to create stronger downdrafts, in most cases cooler air that is forced downwards towards the ground.

Sometimes these downdrafts can produce gusty or damaging winds. We meteorologists call them gust fronts or in extreme cases, microbursts.

However, on the night of June 3-4, something different happened. The air that descended wasn’t cool. Instead, warm air from very high up in the atmosphere descended. Conditions also featured very dry air. As this warm wind rapidly descended to the ground, it increased the surface temperature in Salina, for example, by 10 degrees Fahrenheit. It also dropped the dew point temperature from the mid 60s to the mid 40s.

When heat bursts form, the precipitation that cooled the air aloft dries up and is evaporated. When this occurs, the rain and snow in the air is no longer there and can’t absorb latent heat. In return, the dense air accelerates towards the surface and warms up significantly. The air is anomalously hot, and temperatures can spike 10-30 degrees in a matter of minutes.

When this occurs, the dew points, or the measure of moisture in the air, drops significantly as the dry air hits the surface. Meanwhile, the speed of the rush of warm air can create gusty winds of over 40 miles per hour.

Sometimes heat bursts can produce damaging winds of over 60 mph and boost temperatures over 100°F. They typically occur in the late spring and summertime months across the U.S. Central Plains. In other words, the location of the heat burst was not unusual.

Heat bursts cannot be predicted, however. These events happen suddenly and can last for a couple of hours at most. 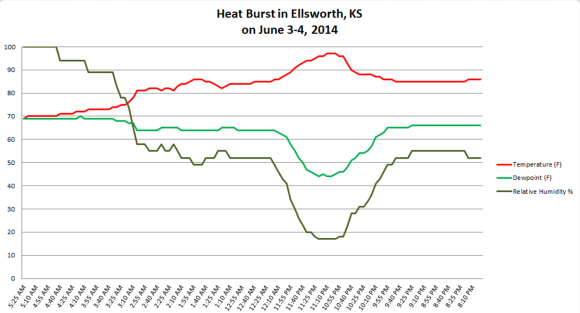 View larger. | The June 3-4 heat burst in Kansas, via the National Weather Service. 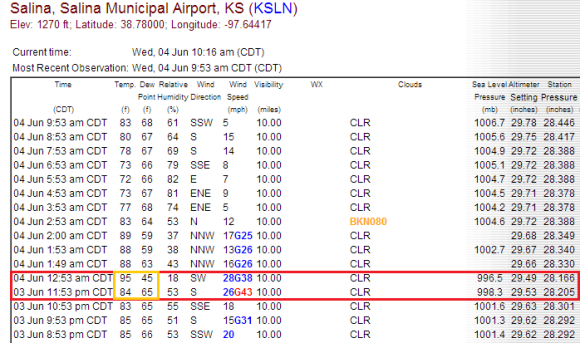 A look at the heat burst that occurred in Central Kansas on Tuesday night and early Wednesday morning of June 3-4, 2014. Image via NOAA

Bottom line: A rare heat burst formed across parts of central Kansas during the night of June 3-4, 2014. These events typically form from a dying thunderstorm, when very warm air from aloft rushes down to the surface to create very dry conditions and anonymously hot temperatures. Heat bursts typically occur during the late spring and summer months. They occur most often across the U.S. Central Plains and during the nighttime hours. They are difficult to predict, and can last as long as a couple of hours before temperatures drop and recover to normal values at the surface.