“Parakeets are Britain’s fastest growing bird population and are on a trajectory to global domination.” 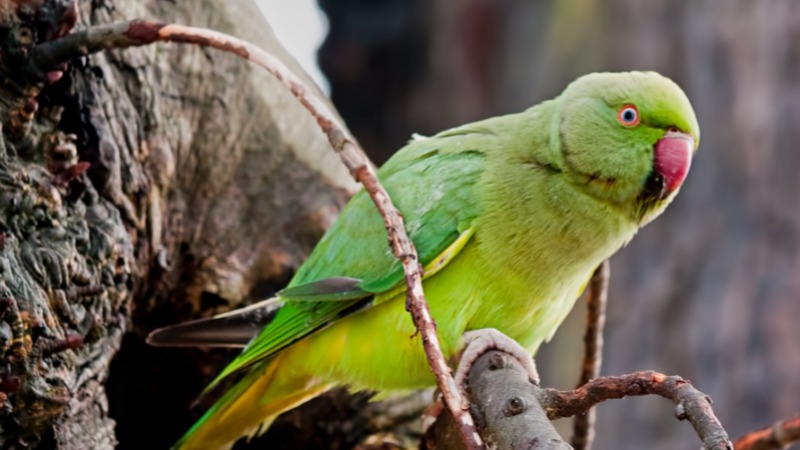 By Hazel Jackson, University of Kent

Love them or hate them, ring-necked parakeets have invaded Europe and they’re here to stay. Already a staple of many urban parks and gardens around the UK, some of these charismatic bright green birds are now so comfortable in their new surroundings that they will happily sit and feed from your hand.

Parakeets are Britain’s fastest growing bird population and are on a trajectory to global domination. Outside of their native southern Asia and sub-Saharan Africa, breeding populations are now established in at least 65 cities around Europe, and more than 30 countries across five continents.

Such non-native, or “invasive” species are one of the biggest causes of biodiversity loss in the world today, and can cause severe economic damage. Understanding these species is incredibly useful for any attempt to design environment policy and prevent further invasions. Populations of invasive ring-necked parakeets (Psittacula krameri) provide an excellent case study, owing to their patterns of rapid growth and spread.

These parakeets were introduced into the UK in the late 1960s and now number well over 32,000 birds. They were originally concentrated around Greater London and nearby Kent, but these areas are now saturated which has resulted in parakeets spreading around the country, reaching as far north as Inverness in Scotland.

Many popular stories exist to explain how these exotic parakeets came to live in the UK, including their escape from the film set of the African Queen, and my personal favourite: their deliberate release by Jimi Hendrix to inject some psychedelic colour into the streets of London. More likely it is a result of the popularity of keeping ring-necked parakeets as pets.

The global transportation of wild ring-necked parakeets in addition to in-country breeding, has led to their successful establishment outside their native range. Between 1984 and 2007 a staggering 146,539 ring-necked parakeets were imported to Europe, before an EU ban on the trade of wild birds. The UK alone imported more than 16,000.

We know how they got to Europe’s cities, but what makes ring-necked parakeets so good at adapting to new environments? The climate is likely to play a strong role in their ability to survive outside of their native range. Despite their incredibly large native range, spanning two continents, the parakeets found across Britain and Europe originate predominately from across the colder foothills of the Himalayas, largely in Pakistan.

The distinct lack of parakeets from warmer areas in Africa suggests similarities in temperature and rainfall between the native and invasive ranges made life easy for them. It seems the parakeets were already well adapted to survive in northern Europe.

Interestingly, back in the late 1800s wild ring-necked parakeets were observed in the UK, but they failed to survive. So what’s different now? Perhaps warmer winters due to climate change, in combination with our love of feeding birds thus giving them a year-round supply of energy, have provided ideal conditions for parakeets to thrive around the country.

Let’s also not overlook the lack of natural predators outside their native range. Unsurprisingly, Asian black eagles aren’t a concern in London’s parks. However, it seems Britain’s urban peregrines and sparrow hawks have now started to notice the exotic new meat on the menu. Yet despite native falcons’ success at preying on wild parakeets, they’re unlikely to make a dent on the growing numbers of invasive parakeets.

Despite parakeets being well established in the UK, we still don’t fully understand their potential impact, good or bad. Do they affect native wildlife by competing for nest holes and food? Preliminary reports show some level of competition for nest sites with European native nuthatches, and that they displace garden birds from bird feeders. Back in Asia and Africa ring-necked parakeets are severe crop pests, but we don’t yet know if they’ll damage British fruit crops and cause economic damage.

Many scientists are also curious about the impact they are having on people. Does living near large roosts cause noise pollution? Does seeing exotic parakeets in parks and gardens around the UK improve human wellbeing? These are just some of the questions we’re aiming to answer through ParrotNet, a pan-European group of researchers dedicated to understanding the challenge of invasive parrots (ring-necked parakeets are just one of 13 species of parrot established across Europe).

Despite their abundance, surprisingly, many British people remain unaware that wild parakeets are living among them. As these vibrant birds are now spreading around the country, in time they will become commonplace in all the UK’s urban areas. While we may still regard these colourful and exotic parakeets as something of an exciting novelty, I suspect our children and their children may simply consider them no more exciting than a common pigeon.