Overgrazing by deer is changing the face of U.S. forests

Deer’s natural predators, wolves, have been exterminated. Today, there are four to 10 times more deer in the U.S. than prior to European settlement 300 years ago.

Scientists in the U.S. Northeast published two studies examining the impact of deer overpopulation on natural ecosystems in early March 2014. Biologists at Cornell University investigated disruptions by large numbers of deer to natural growth in developing forests. University of Pittsburgh researchers showed how large deer populations are causing an increase in garlic mustard, an exotic invasive plant, in forest understory fauna. In both instances, the root problem is overgrazing of native plants by deer that open up more growing space for invasive exotic plants that deer find unpalatable.

These studies were conducted in in Ithaca, New York and Pittsburgh, Pennsylvania. But the problem of deer proliferation is widespread across the U.S. and Canada. Their numbers have increased dramatically for several reasons. Since the arrival of European settlers more than 300 years ago, the deers’ natural predators, wolves, have been exterminated. And, as human populations have increased, deer forest habitat has shrunk drastically, mostly giving way to suburban lawns, gardens and farms that can also provide a deer’s food sources. Compared to historical population estimates prior to European settlement, deer populations today have increased, depending on location, by four to 10 times. 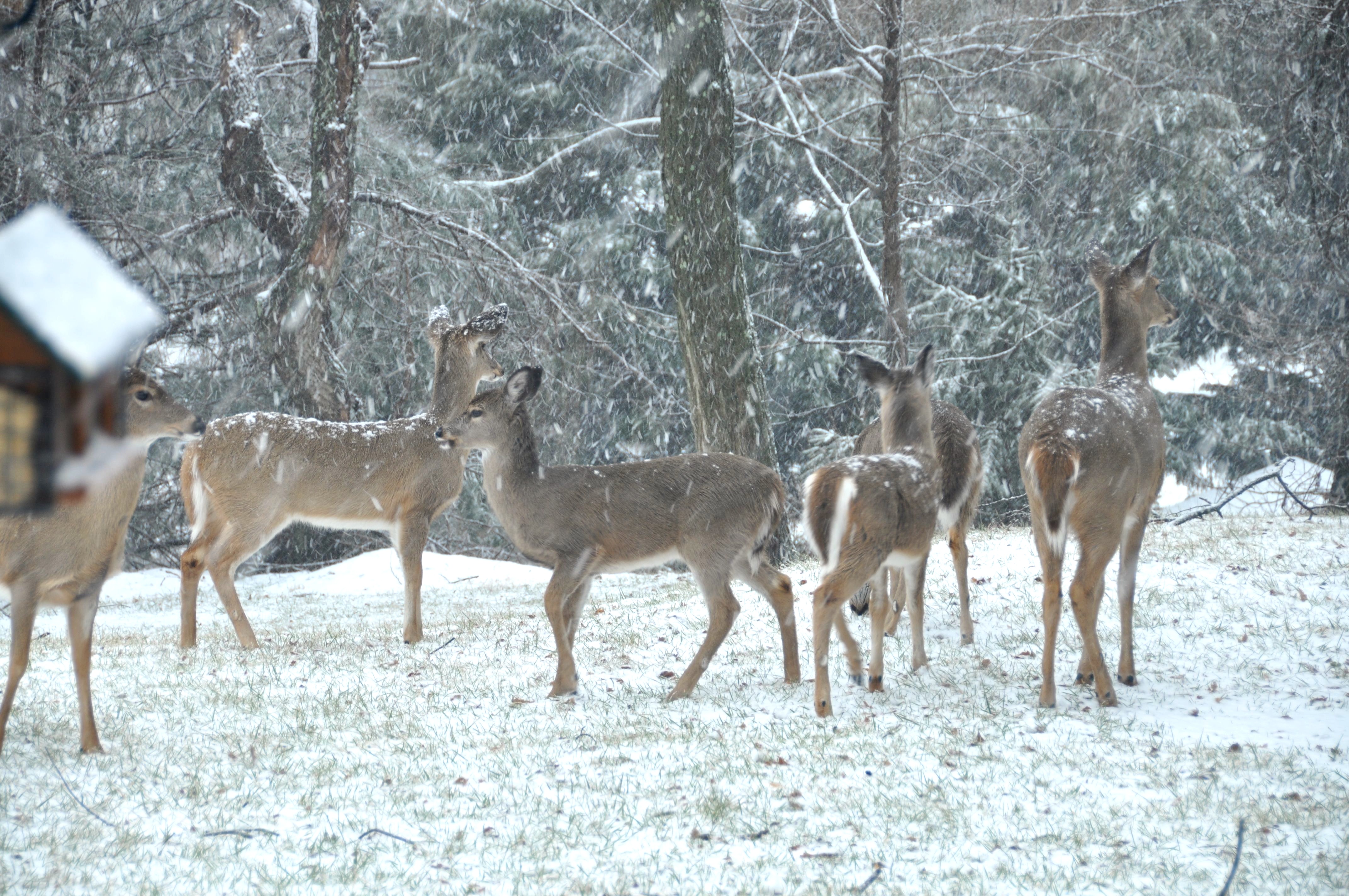 A herd of whitetail deer visit a suburban backyard. Compared to historical population estimates prior to European settlement, deer populations today have increased, depending on location, by four to 10 times. Photo by EarthSky. 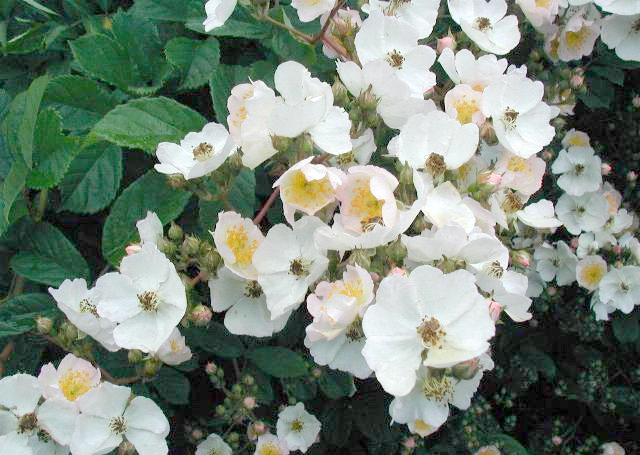 One invasive plant allowed to proliferate due to overgrazing by deer is this multiflora rose, native to eastern Asia, originally brought to the U.S. as an ornamental. With no natural predators to keep it in check, it is now regarded as an exotic invasive plant in the U.S. Image courtesy JoJan via Wikimedia Commons.

Under normal conditions, when cleared land is left to revert to forest, there’s a natural progression of vegetation: grasses are gradually replaced by herbaceous plants and shrubs, followed by native tree species such as cottonwood, locust and sumac. Deer, however, have a strong preference for consuming native plants over exotic invasive plants. As a result, most native plants are unable to recover from the pressure of overgrazing by deer. This allows exotic invasives such as thorny thickets of buckthorn, viburnum and multiflora rose bushes, largely shunned by deer, to become dominant in the landscape.

Scientists at Cornell studied how deer alter the natural development of temperate woodlands in Ithaca, New York, where deer numbers are 10 times greater than historical populations. Their findings were published in the March 7, 2014, issue of PLOS ONE.

Over several years, they observed plant diversity on university-owned land, comparing plants in plots enclosed by deer-proof fences with those in unprotected plots. Where deer had free reign, the plots showed patches of bare soil and fewer plant species, especially a lack of woody plants. The scientists also collected soil samples from the two types of plots and allowed seed in the soil to germinate. Soil from unprotected plots produced more non-native plants compared to that from plots protected from deer. Antonio DiTommaso, of Cornell, said in a press release:

It’s obvious that the deer are affecting the above-ground species, but it’s like an iceberg. There are major effects below the soil surface. We are seeing a divergence of seeds contained within the soil from what should be there. We are not seeing the seeds of woody plants. Instead, we’re seeing an escalation of non-native seed and the virtual elimination of woody plant seeds.

Another study, published in the Proceedings of the National Academy of Sciences on March 10, 2014, examined the effects of deer overpopulation on forest understory plants, particularly the increase in garlic mustard, an exotic invasive plant from Europe and Asia that was brought to Long Island, New York, in the 1860s for use as a culinary herb. Garlic mustard, not favored by deer, thrives in the shade of the forest floor, displacing important native plant species preferred by deer, such as trillium. 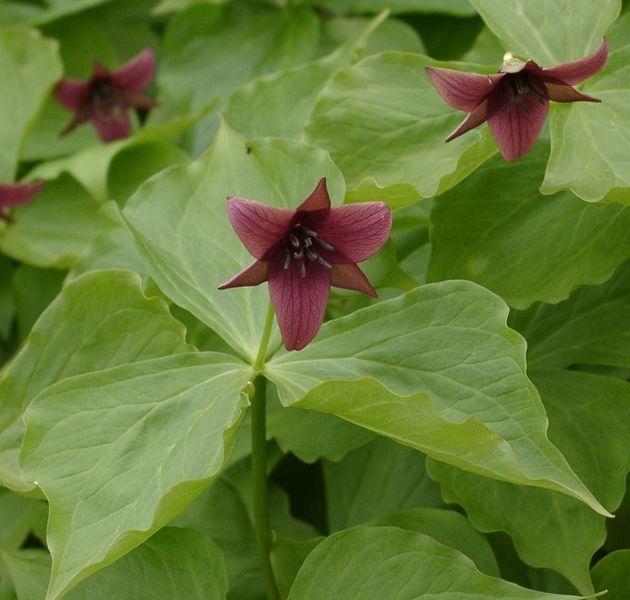 Red trillium (Trillium erectum) is a native herbaceous plant found in forest understories of eastern United States. As this favorite food of deer is diminished by overgrazing, alien or exotic species take over. Image courtesy Ramin Nakisa, via Wikimedia Commons. 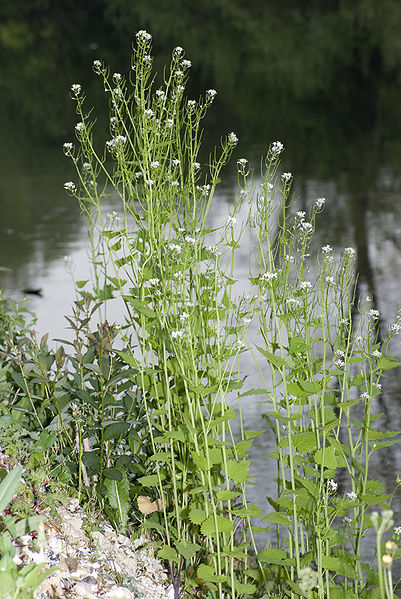 One of the studies focused on this plant, garlic mustard, native to Europe. It was originally brought to the U.S. as a culinary herb but is now considered an invasive plant. Overgrazing by deer is allowing it to thrive in New York forests and to choke out native plant species. Image courtesy of O. Pichard via Wikimedia Commons.

University of Pittsburgh professor Susan Kalisz and her team began a study in 2003 at the Trillium Trail Nature Reserve in Fox Chapel, Pennsylvania, to learn how deer affected plant diversity. They created several 196-square-meter plots in the forest, half of which were fenced to exclude deer. Over the years, using statistical analysis, they found that in plots where deer were excluded, the numbers of trillium, a herbaceous native plant, increased while garlic mustard amounts were reduced. Said Kalisz, in a press release:

This demonstrates that the high population growth rate of the invader is caused by the high abundance of deer.

She added that her team’s research supports a theory that native plant species are able to exert biotic resistance. In other words, if native plants such as trillium are not overgrazed by deer, they could, collectively, compete successfully against aggressive non-native plants.

Plant diversity of temperate forests are being degraded by two major players: too many deer that favor eating native plants, and invasive exotic plant species such as garlic mustard that move in to fill the niche vacated by native plants that are overconsumed by deer. Said Kalisz, in the same press release:

When people walk in the woods where deer are overabundant, they don’t realize what’s missing. They don’t know what used to be growing there. They don’t know that species are being lost and replaced by invaders.

Reducing the deer population, preventing the introduction of exotic invasive plants, and restoring native plants may sound like a straightforward solution. But nothing’s that simple when it comes to dealing with these problems at the local level. States have different policies about deer management and ecosystem management, and deer certainly don’t recognize state boundaries. Yet the problems caused by deer overpopulation are worsening, and also extend beyond forest health to damage in farms, orchards, and residential areas.

By the way, Kalisz noted that while she was submitting her manuscript to Proceedings of the National Academy of Sciences online, she watched a six-point buck ambling down the street in front of her home in Pittsburgh’s East End.

Bottom line: The results of two studies examining the impact of deer overpopulation on natural ecosystems were published early March 2014 in the Proceedings of the National Academy of Sciences and PLOS ONE. Scientists at Cornell University investigated how large deer populations disrupted the natural growth of forests, and researchers at the University of Pittsburgh showed how overgrazing on native plants led to an increase in garlic mustard, an exotic invasive plant, in the forest understory fauna. The declines in plant diversity, and increase in exotic invasive plants are happening because deer prefer consuming native plants, and allowing exotic invasive plants, that they generally find unpalatable, to proliferate.