Ophelia packs powerful winds as it pushes into Newfoundland

Ophelia has now weakened from a hurricane to a tropical storm as it pushes into Newfoundland today. Its winds still pack a punch at 70 miles per hour.

The island of Newfoundland and mainland Labrador (located northwest of the island) are the easternmost province of Canada. (Wikimedia Commons)

It has now weakened from a hurricane to a tropical storm as it races toward the Avalon Peninsula, the easternmost part of the island of Newfoundland. By definition, hurricanes must have winds of 75 miles per hour. Ophelia’s top sustained winds weakened to about 70 mph (110 kph). The storm was moving northeast at 43 mph (69 kph) at about 6 a.m. EDT (10 UTC) today. It has been very unusual to see a major hurricane develop so far north in latitude for this time of year.

The entire journey of Ophelia has been interesting. It had degenerated into an open wave earlier this week as wind shear and dry air disrupted the organization of the cyclone.  By September 28, 2011, Ophelia organized back into a tropical storm and later gained hurricane status.  Two days later, Ophelia strengthened into a Category 3 hurricane with winds over 110 mph, making it the third major hurricane of the 2011 Atlantic hurricane season.  By October 2, 2011, Ophelia became the strongest hurricane to form in the Atlantic basin for the 2011 season, as it had 140 mph winds with a pressure reading of 940 millibars.

Visible satellite image of hurricane Ophelia as it became a monster Category 4 hurricane with winds around 140 mph.

Intensity of a storm is very difficult to forecast, and Ophelia proved this when the storm decided to ramp up September 30, 2011.  Ophelia pushed around 130 miles east of Bermuda, sparing the island from a direct impact of heavy rain and violent winds.

Again … it was unusual to see a major hurricane develop so far north in latitude for this time of year.  As Ophelia pushes further north in latitude, colder Atlantic waters and higher wind shear will weaken the system. 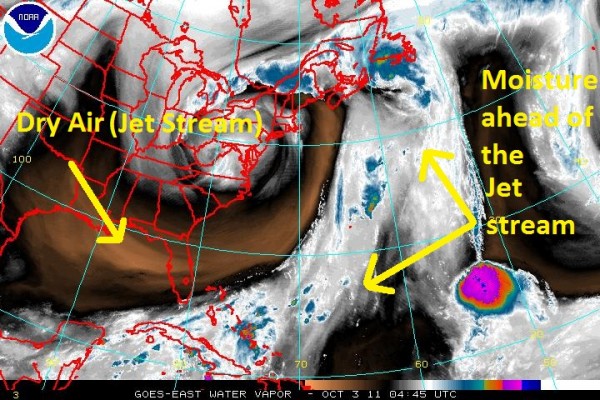 As of now, Ophelia will continue to weaken as a tropical storm as it moves through Newfoundland. It will bring strong winds and heavy surf to the island. Rainfall and flooding should not be an issue for parts of Newfoundland, as Ophelia is racing to the northeast around 45 mph.

Ophelia will lose all of its tropical characteristics by later today, and could affect parts of western Europe by the end of this week. 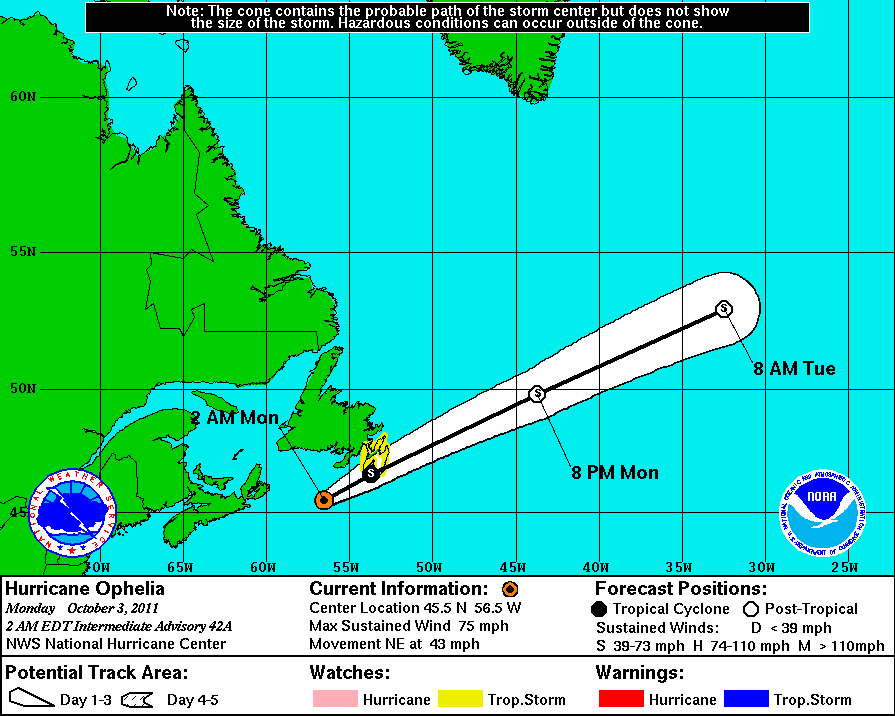 Forecast track for Ophelia as it races to the northeast. Image Credit: National Hurricane Center

Overall, Ophelia pushed to the east of Bermuda and will rapidly push out of Newfoundland today producing strong winds around 50-60 mph and strong surf along the coast.

Bottom line: Ophelia was our third major hurricane of the 2011 Atlantic hurricane season. It is pushing into Newfoundland today (October 3, 2011) as a tropical storm with winds around 70 miles per hour. It is very unusual to see a major hurricane develop so far north in latitude for this time of year. Ophelia could affect parts of western Europe by the end of the week.