Heat escaping through openings in sea ice influences sea and atmospheric temperatures and wind patterns around the globe – even rainfall around the tropics, says new study. 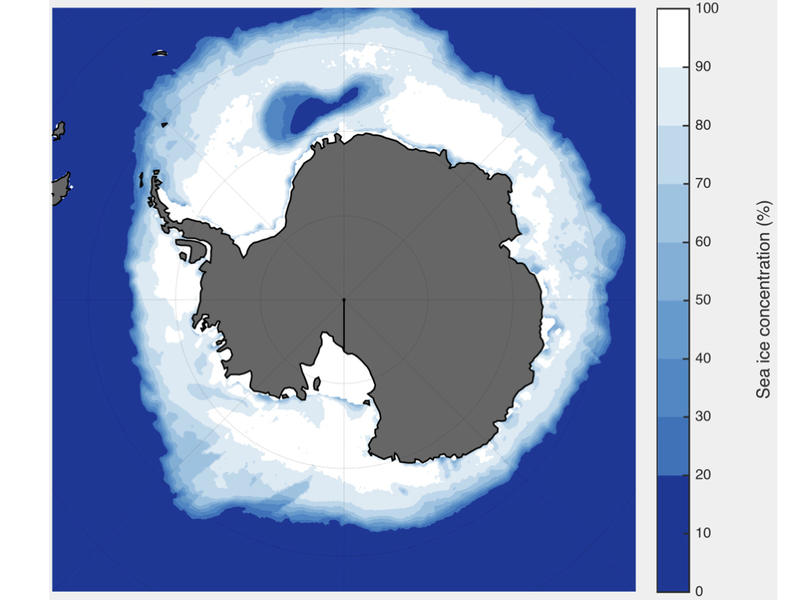 A polynya, or opening in the sea ice, occurred in the Southern Ocean’s Weddell sea during the winters of 1974-76, triggering a series of climatic and oceanographic changes. This image shows the sea ice concentration averaged over three September months 1974-1976 during the Weddell Polynya, made with data from the NIMBUS-V satellite from the National Snow Ice Data Center. Image via University of Pennsylvania.

According to a new analysis of climate models by an international team of researchers, heat escaping from the ocean through polynyas – or openings in sea ice – influences sea and atmospheric temperatures and wind patterns around the globe – even rainfall around the tropics.

In 1974, satellite images revealed a 250,000 square kilometer (96,526 square mile) polynya in the Weddell Sea, south of South America, that persisted over three winters. Such expansive ice-free areas in the ocean surrounding Antarctica haven’t been seen – until a small polynya was observed last year.

The new study, published September 8, 2017 in the Journal of Climate reveals the significant global effects that these seemingly anomalous polynyas can have. Though this process is part of a natural pattern of climate variability, the researchers say that it has implications for how the global climate will respond to future anthropogenic warming.

Irina Marinov, of the University of Pennsylvania is study author. She said in a statement:

This small, isolated opening in the sea ice in the Southern Ocean can have significant, large-scale climate implications. Climate models suggest that, in years and decades with a large polynya, the entire atmosphere warms globally, and we see changes in the winds in the Southern Hemisphere and a southward shift in the equatorial rain belt. This is attributable to the polynya.

Until recently, climate scientists and oceanographers believed that atmospheric and ocean conditions around the tropics were the primary drivers in affecting conditions outside the tropics. But in the last few years, scientists have shown that the opposite is also true: the Southern Ocean has an important role in affecting tropical and Northern Hemisphere climates.

When the polynyas occur- roughly every 75 years – they act as a release valve for the ocean’s heat, said the researchers. Not only does the immediate area warm, but there are also increases in overall sea-surface and atmospheric temperatures of the entire Southern Hemisphere and, to a lesser extent, the Northern Hemisphere. Changes in north-south temperature gradients lead to changes in wind patterns as well. Marinov said:

We are seeing a decrease in what we call the Southern Hemisphere westerlies and changes in trade winds. And these winds affect storms, precipitation and clouds.

Among these changes in precipitation is a shift in an equatorial belt where trade winds converge, resulting in intense precipitation. When a polynya occurs, this rain belt moves south a few degrees and stays there for 20 to 30 years before shifting back. Marinov said:

This affects water resources in, for example, Indonesia, South America and sub-Saharan Africa. We have a natural variation in climate that may be, among other effects, impacting agricultural production in heavily populated regions of the world.

Bottom line: Heat escaping through polynyas – openings in sea ice – influences sea and atmospheric temperatures and wind patterns around the globe, according to new study.

Read more from the University of Pennsylvania