It circulates heated blood through its body as mammals and birds do. Its warm blood makes the opah a high-performance predator that swims faster, sees better.

Fisheries researchers announced this month that the opah now holds the distinction of being the first fish on Earth known to be truly warm-blooded. Biologist Nicholas Wegner of NOAA Fisheries’ Southwest Fisheries Science Center in La Jolla, California examined the gills of an opah and observed that its tissue had a unique design tweak that allowed the animal to maintain endothermy, or warm-bloodedness. The journal Science published Wegner’s paper about the opah on May 15, 2015, and Wegner said in a statement from NOAA:

Nature has a way of surprising us with clever strategies where you least expect them.

Before this discovery, I was under the impression [the opah] was a slow-moving fish, like most other fish in cold environments. But because it can warm its body, it turns out to be a very active predator that chases down agile prey like squid and can migrate long distances.

As Wegner’s team dissected a captured opah – which is a little-known fish, increasingly popular in seafood markets – Wegner noticed the gills contained an intricate tangle of both red and blue blood vessels. Known as a retia mirabilia (Latin for “wonderful net”), these veins and arteries are seen in other highly skilled marine predators, such as tuna and sharks.

However, tuna and sharks do not retain their internal heat as opah do. They do generate heat from muscle movement, but only around specific muscles groups. This process creates warmed but isolated muscle tissue for tuna and sharks, and their blood cools instantly when exposed to seawater whenever the fishes’ bodies are re-loaded with oxygen via their gills.

The opah’s retia mirabilia, on the other hand, is uniquely located within its gills. That location lets the blood vessels carrying warmed blood from the opah’s heart heat the freshly oxygenated blood in the gills. This warm blood then flows throughout the opah’s body. In this way, the opah maintains a significantly warmer temperature throughout its body, giving it a distinct advantage in its ecosystem.

Satellite tracking showed opah spend most of their time at depths of 150 to 1,300 feet, without regularly surfacing. Their higher body temperature should increase their muscle output and capacity, boost their eye and brain function and help them resist the effects of cold on the heart and other organs.

The opah also uses its large pectoral fins to generate heat and continually warm the rest of its body. And the fish has thick layers of fat, which insulate the heart, gills, and pectoral fin muscles from the surrounding cold water.

Wegner’s team implanted several opah with small thermometers before releasing them back into the ocean. The recorded data featured temperatures consistently higher than those in the surrounding water. The team’s study in Science states:

The fish had an average muscle temperature about 5 degrees Celsius (9 degrees Fahrenheit) above the surrounding water while swimming about 150 to 1,000 feet below the surface.

Researchers conclude that the opah’s unique evolutionary advantage raises the internal temperature of its brain, muscles, and most importantly its heart. Because of its warmer temperature, this fish has become specialized for living in deep water and hunting prey.

Some people find the appearance of the opah comical. But now this fish has surprised researchers with its unique adaptation. 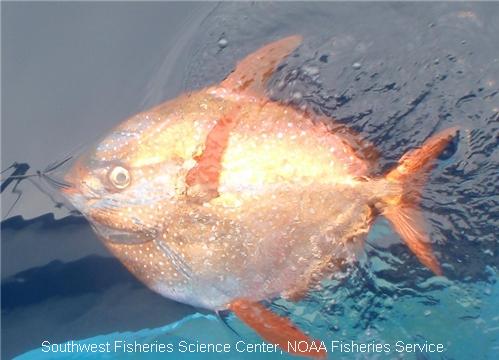 This opah was caught and released on a longline set off of the Channel Islands near California. Opah have also been caught incidentally in Hawaii longline fisheries for years. Image via NOAA FishWatch.

Bottom line: The opah is the first known truly warm-blooded fish. Using a network of arteries and veins in its gills to concurrently warm its body and raise its internal temperature, this fish has gained a unique advantage for thriving in deep water.