Earth Day is a good time to think about the human footprint revealed by NASA satellite images of cities at night.

In thinking about Earth Day today, one thought I’d like to share is that of the ‘footprint’ humans as a species make on our planet.  NASA’s image of Earth’s city lights is in many ways a clear picture of the human footprint. 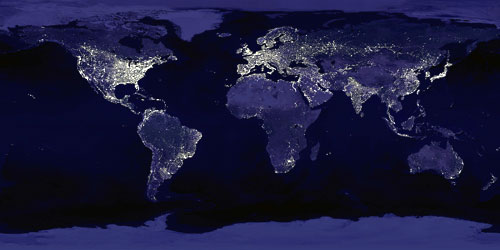 The image was originally released in 2000 and was put together in part by Marc Imhoff, a scientist who works with NASA’s Terra satellite.  Dr. Imhoff talked with EarthSky about how the image was created.

I came about those data in a funny sort of way.  I was very interested
in looking at the urbanization footprint on the planet.  We did
not really have any global imagery data sets that showed where cities
were with any degree of accuracy. 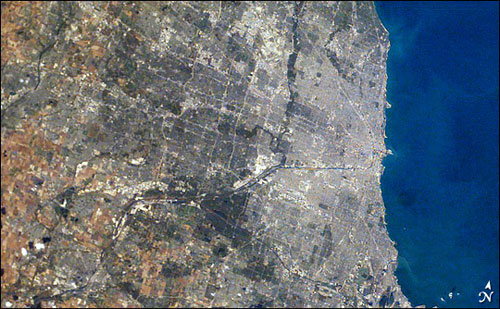 And I was walking down the halls of
Goddard Space Flight Center, and the astronomy club had a poster up of
this satellite data from the defense department showing the city
lights at night of the Earth.  They were using it as a sort of
protest tool to talk about how light pollution was obscuring their
view of the heavens.  It’s very difficult to see stars with all that
light out there.  And I thought it was fantastic, so I asked where
they got it, and it turns out it was a defense department satellite
that was being used essentially for nighttime aircraft navigation.  It
used the illumination of the moon to observe clouds.  So the sensor
was very sensitive, sort of like night vision goggles, if you will, in
space.  It would use the illumination of the moon to map clouds.  So
on new moon nights, where there was no moon and no clouds, you would
see the city lights. 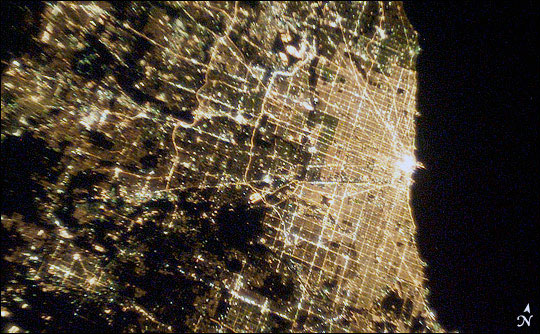 So I saw this, and a colleague of mine out at
NOAA, Chris Elvidge also saw it, and together we worked to
produce some data sets with the defense department  to release for
civilian use that actually mapped these global cities. So it’s been a
very compelling data set, because at a glance you can see the human
footprint on the planet.  And it’s quite substantial.

I’ll leave you with Dr. Imhoff’s response to my question of whether scientists ever feel overwhelmed by thinking about changes happening to our Earth as a whole.  Basically, no scientist is an island.

Yeah, I think it is overwhelming at times. These are very large missions, and being the project scientist is a somewhat difficult one, in that you have a lot of different responsibilities.  And without the science team, because there’s a team of principal investigators and team leaders that have been involved with NASA’s Terra satellite  for its entire duration.  And without that team it would be impossible, because the team members provide the specifics in each one of these different areas, whether we’re looking at atmospheres, or the oceans, or you’re looking at the Earth’s energy system.  Without that team it would be just impossible to fully understand what’s going on.

Satellite imagery of Earth, as revealed in looking at cities at night, remains a powerful way of seeing the human footprint we make on our planet.