Officially spring, but feels like winter for many in U.S.

If you like warm weather in the eastern U.S., then you won’t like the forecast for the upcoming week. Below average temperatures will be the norm!

In this post, we will look into why the temperatures remain so chilly across the U.S. and when we might be able to see warmer weather typical of a “normal” spring weather.

The weather pattern this winter has been almost completely opposite of the one we saw last winter for the 2011-2012 season. This winter, we have seen plenty of snow storms push through parts of the Central United States and push northeast into parts of New England. These cold temperatures are thanks to various weather patterns that literally funnel the cold air into the eastern United States. Think of squeezing a tube of toothpaste. There’s nowhere for the toothpaste to go except out of the tube and onto your toothbrush. In this case, the cold air is like the toothpaste and the eastern United States is that toothbrush. There is simply no where else for this cold air to go. The Arctic Oscillation (AO) and the North Atlantic Oscillation (NAO) are both extremely negative, and they’re the reason the air is forced to the south instead of staying north in Canada or in the Arctic. 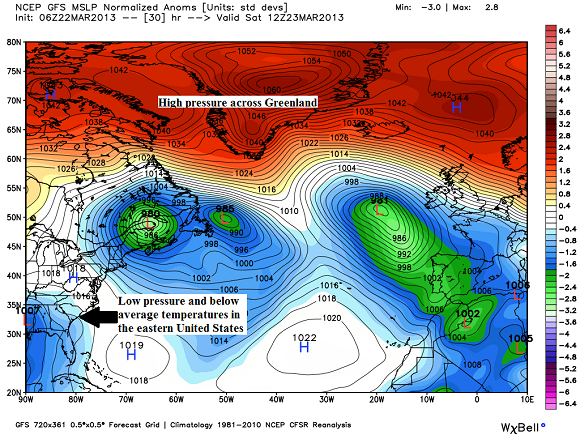 This weather pattern explains why the eastern U.S. is experiencing below average temperatures. Image Credit: Weatherbell

The Arctic Oscillation, also referenced as the AO, is a climate pattern characterized by winds circulating counterclockwise around the Arctic at around 55°N latitude. In a negative phase of the AO, the winds become weaker at the poles and the cold air that is bottled up in the Arctic spills southward and brings an arctic airmass to the mid-latitudes such as the United States. With this in mind, our AO index is extremely negative. According to the Capital Weather Gang, these AO negative values are entering near record low values with readings of around -5.6 on Wednesday. There is a shot of these numbers possibly dropping into record low territory before before slowly rising again by the middle of next week. Simply check out how far it has dipped on the negative side:

While the cold weather continues to pour into the eastern United States, Greenland continues to experience plenty of high pressure and warmer conditions. The high over Greenland is acting as a blocking mechanism that prevents the cold air from pushing east in the northern latitudes. Since the cold air and stormy weather cannot push into Greenland, it is forced to push south. The North Atlantic Oscillation, also known as the NAO, is also very negative. The negative phase of the NAO reflects above-normal heights and pressure across the high latitudes of the North Atlantic and below-normal heights and pressure over the central North Atlantic, the eastern United States and western Europe. Check out the negative values of the NAO:

Temperatures appear below average for the end of March in the eastern U.S. Image Credit: NOAA/CPC

Bottom line: The weather pattern continues to support below average temperatures across the eastern United States through the end of March. If you love spring, we will have to wait another two weeks before we see any improvement. The pattern should break by the first week of April, as warmer conditions should develop as they should during this time of the year. Of course, springtime always brings with it not only warmer temperatures, but severe weather and my least favorite part: pollen. Living in northern Georgia, we would typically see plenty of pollen flying around by this time in late March. However, the cooler temperatures have delayed the pollen dispersal for the time being. I expect that to change by early April, once temperatures finally begin to warm above average.