Ocean scientists have collected another example of an unusual deep sea carnivorous sponge, shaped like a harp, off the coast of northern California.

An expedition led by the Monterey Bay Aquarium Research Institute (MBARI) discovered an unusual deep sea carnivorous sponge – in this case, shaped like a harp – off the coast of northern California, scientists reported on October 18, 2012 in the journal Invertebrate Biology. The harp sponge is a type of carnivorous sponge in the genus Chondrocladia.

Another MBARI expedition first discovered the harp sponge (Chrondrocladia lyra) in 2000. Scientists were able to collect two specimens of the harp sponge by the use of remotely operated vehicles (ROVs). The ROV Tiberon collected one specimen in 2000, and the ROV Doc Ricketts collected a second specimen in 2005. An additional 10 specimens were observed with the use of video cameras during ROV expeditions in 2006, 2007 and 2009.

The harp sponges were found growing at depths of 3,300 to 3,500 meters (10,800 to 11,500 feet) in soft deep sea sediments. The sponges were anchored to the sea floor sediments with root-like structures called rhizoids.

The harp sponges were notable for their unusual lyre-shaped structure that consisted of two to six vanes radiating out from the sponge’s center. Each vane supports a series of upright, equally spaced branches that are covered with fine filaments. At the end of each branch is a round ball. 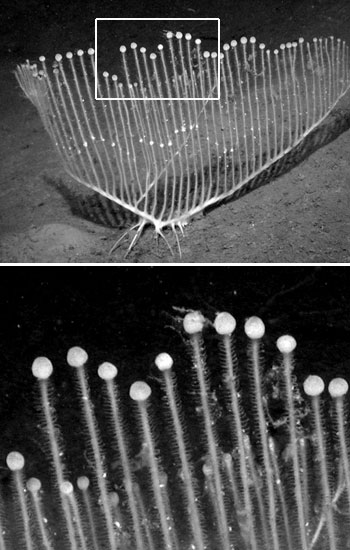 The branches of the harp sponge are covered with fine filaments. The sponge uses these filaments to capture tiny crustaceans as prey. Image via MBARI.

The sponge uses the filaments lining the branches to capture tiny crustaceans as prey. The sponge covers the prey with a thin membrane then, slowly digests the contents.

The terminal balls on the sponge’s branches are reproductive structures filled with packets of sperm that get released into the water column.

According to the press release:

Scientists believe the harp sponge has evolved this elaborate candelabra-like structure in order to increase the surface area it exposes to currents, much like sea fan corals. The harp sponge’s unusual shape and exposure to currents may also help it to reproduce more effectively.

Less than 10% of sea floor has been explored by scientists. It’s likely that many new marine species have yet to be discovered. 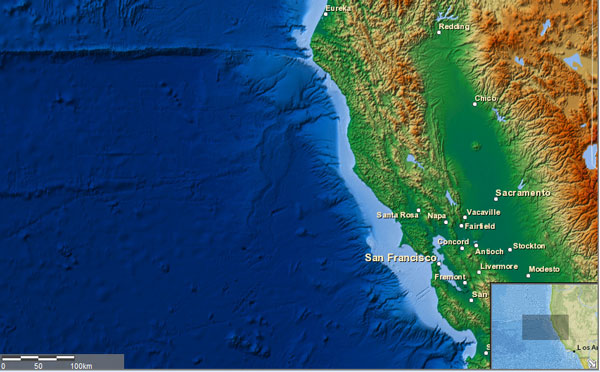 Welton Lee, lead author of the new study, is a research associate at the California Academy of Sciences. His co-authors include Henry Reiswig, William Austin and Lonny Lundsten. The research was funded in part by the David and Lucile Packard Foundation and the Natural Sciences and Engineering Research Council of Canada.

Bottom line: An unusual deep sea sponge shaped like a harp was discovered off the coast of northern California during an expedition led by the Monterey Bay Aquarium Research Institute. The harp sponge is a type of carnivorous sponge in the genus Chondrocladia. The research findings were published on October 18, 2012 in the journal Invertebrate Biology.

Why sea level is rising faster than predicted