Watch an octopus get spiky

Octopuses and cuttlefish have an amazing defense tactic. They can erect 3D spikes from their skin, hold them for an hour, then retract them and swim away.

A new study looks at an amazing defense tactic of octopuses and cuttlefish: the ability to erect 3D spikes out of their skin, hold them for an hour, then quickly retract them and swim away. The study, published February 16, 2018, in the peer-reviewed journal iScience, describes the neural and muscular mechanisms that underlie the animals’ extraordinary ability. Paloma Gonzalez-Bellido, a neuroscience lecturer at University of Cambridge, is lead author of the new research. She said in a statement:

The biggest surprise for us was to see that these skin spikes, called papillae, can hold their shape in the extended position for more than an hour, without neural signals controlling them.

This sustained tension, the team found, arises from specialized musculature in papillae that’s similar to the “catch” mechanism in clams and other bivalves (creatures with two shells hinged together).

A giant Australian cuttlefish erecting its spikes, via GIPHY.

The catch mechanism allows a bivalve to snap its shell shut and keep it shut, should a predator come along and try to nudge it open.

Rather than using energy to keep the shell shut, the tension is maintained by smooth muscles that fit like a lock and key, until a chemical signal (neurotransmitter) releases them. The scientists think that a similar mechanism may be at work in cuttlefish papillae.

Octopuses and cuttlefish have surprising control over their skin spikes. Image via GIPHY.

We hypothesize that the neural circuit for iridescence and for papillae control originates from a common ancestor to squid and cuttlefish, but we don’t know that yet. This is for future work.

Read more about the recent study, from University of Chicago 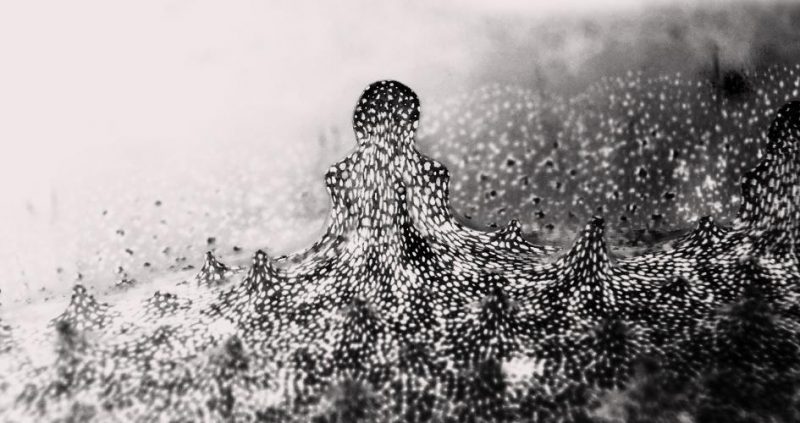 Octopuses and cuttlefish erect papillae – spikes on their skin – as a camouflage tactic. Image via Paloma Gonzalez-Bellido/ UChicagoNews.

Bottom line: A new study explores the mechanisms by which the octopus and cuttlefish can erect spikes from their skin as a defense tactic.