No surprise. In fact, if you’re 27 years old or younger, you’ve never experienced a single month where global temperatures ranked below the average for that month.

Although October 2012 was below average in temperature across the contiguous United States, the latest report released by the National Climatic Data Center (NCDC) shows October 2012 tied with 2008 as the fifth-warmest October recorded globally since record keeping began in 1880. Global temperatures were 0.63 degrees Celsius (1.13 degrees Fahrenheit) above average for the month. The average temperature for October globally is at 14.0°C (57.1°F). Some of the warmest areas across the globe occurred in eastern Europe, western and far eastern Asia, northeastern and southwestern North America, central South America, northern Africa, and most of Australia. Meanwhile, cooler-than-average temperatures occurred across much of northwestern and central North America, central Asia, parts of western and northern Europe, and southern Africa. 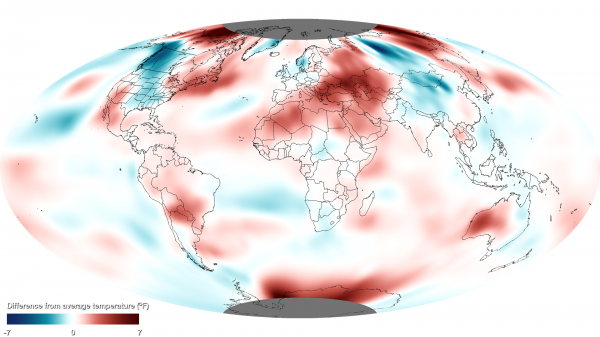 Land and ocean temperature anomalies in October 2012. Image via NOAA

If you look at the period from January 2012 to October 2012, the global land and ocean temperatures is ranked as the eighth-warmest period on record with temperatures 0.58°C (1.04°F) above the 20th century average. Meanwhile, ocean temperatures for this period are ranked 10th warmest on record. United States, south central Canada, northern Argentina, part of southern Europe, parts of the northwestern and southern Atlantic Ocean, and parts of the southern Indian Ocean have all experienced record warmth for the year-to-date. Even if November and December are unusually cool for parts of the United States, 2012 will likely go down as the warmest year ever recorded. According to Jeff Masters from Weather Underground, the last time Earth as a whole had a below-average October temperature was in 1976, and the last below-average month of any kind, globally, was February 1985. If you are 27 years old or younger, you’ve never experienced a single month where global temperatures ranked below the average temperature for that month. Amazing statistic, isn’t it?

Precipitation across the globe

Areas that received very little rainfall globally occurred in the central United States, majority of Australia, and parts of south and southeast Asia. Australia ranked as the 10th driest October in a record book that goes back to 113 years. Meanwhile, some of the wettest locations across the globe occurred in northeast United States (thanks to Hurricane Sandy), most of Europe, western and central Africa, and eastern Asia. In Finland, observed rainfall totals were double the October average. Meanwhile, heavy rains brought flooding in parts of Nigeria, Niger, Chad, and Cameroon in parts of west-central Africa.

Click on this image to see climate anomalies and weather events that occurred in October 2012. Image Credit: NCDC/NOAA 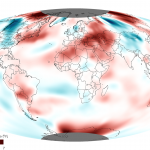 Temperature anomalies in October 2012 via NOAA

Click on this image to see climate anomalies and weather events that occurred in October 2012. Image Credit: NCDC/NOAA

Bottom line: October 2012 is ranked as the fifth-warmest October on record since record keeping began in 1880. The combined global land and ocean surface temperature was at 0.63°C (1.13°F) above the 20th century average of 14.0°C (57.1°F). The last time we saw below-average temperatures across the globe was back in February of 1985. In other words, if you’re 27 years old or younger, you’ve never experienced a single month where global temperatures ranked below the average for that month.