Scientists identified what they call the Pacific Extreme Pattern – warm seawater next to cool seawater – and showed its connection to heat waves weeks later.

View larger. | Sea surface temperature anomalies — waters that are warmer or cooler than average — in the mid-latitude Pacific 50 days in advance of a June, 2012, heat wave in the eastern half of the U.S. See map below. Image via NCAR/UCAR/McKinnon.

On March 28, 2016, scientists at the National Center for Atmospheric Research (NCAR) released word of a study showing it’s possible to predict an increased chance of summertime heat waves 50 days in advance. The work focused on the formation of an ocean pattern – warmer-than-average water butting up against cooler-than-average water – in the middle of the North Pacific Ocean. These scientists called it the Pacific Extreme Pattern and said that, when it appears, the odds that extreme heat will strike during a particular week — or even on a particular day — can more than triple.

If we can give city planners and farmers a heads up that extreme heat is on the way, we might be able to avoid some of the worst consequences.

For their study, the scientists focused on a swath of the United States, stretching across much of the Midwest and up the East Coast, encompassing both agricultural areas and populated cities.

They looked to see if there was a relationship between global sea surface temperature anomalies — waters that are warmer or cooler than average — and extreme heat in the eastern half of the U.S. Their statement said:

Right away, a pattern popped out in the middle of the Pacific, above about 20 degrees North latitude. The scientists found that the particular configuration of ocean water temperatures … was not only found when it was already hot in the eastern U.S., but that it tended to form in advance of that heat. 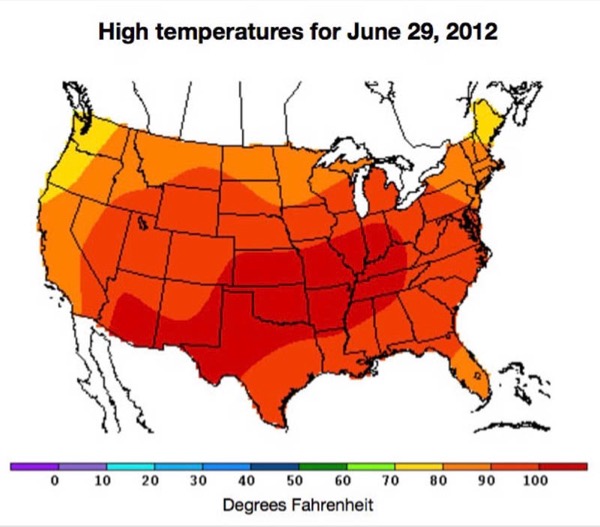 June 29 was the hottest day of 2012 in the eastern United States. Scientists found that the extreme heat around that time could have been predicted by a pattern of ocean water temperatures – which they call the Pacific Extreme Pattern – shown in the image at the top of this post. Image via NCAR/UCAR/McKinnon.

They then used data collected from 1,613 weather stations across the eastern U.S. between 1982 and 2015, as well as daily sea surface temperatures for the same time period, and hindcasted each year in the dataset to see if they could retrospectively predict extreme heat events – or lack of those events – during that year’s summer.

At 50 days out, the scientists were able to predict an increase in the odds – from about 1 in 6 to about 1 in 4 – that a heat wave would strike somewhere in the eastern U.S. during a given week.

At 30 days out or closer, the scientists were able to predict an increase in the odds – to better than 1 in 2 for a particularly well-formed pattern – that a heat wave would strike on a particular day.

They say this new technique could improve existing seasonal forecasts.

And they say the study’s findings point toward the possibility that the Pacific Extreme Pattern, or a different oceanic fingerprint, could be used to forecast other weather events far in advance, including cooler-than-average days and extreme rainfall events.

The research is being published in the journal Nature Geoscience.

Bottom line: Scientists at the National Center for Atmospheric Research (NCAR) said on March 28, 2016, that it’s possible to use an ocean pattern – warmer-than-average water butting up against cooler-than-average water – in the North Pacific Ocean to predict an increased chance of summertime heat waves in the U.S. 50 days in advance. They call it the Pacific Extreme Pattern.