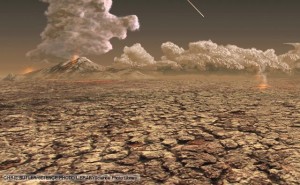 Early Earth. Computer artwork of volcanic eruptions and meteorites falling on a young Earth during its formation. The Moon is seen in the sky, glowing as it is also impacted by meteorites. At this stage, the surface of the Earth was mostly volcanic. The meteorites are seen as bright tracks as they burn up in Earth’s primitive atmosphere. The Earth and the Moon are thought to have formed around 4.6 billion years ago from the accretion of rocks and dust, followed by the later collision of two protoplanets.

Thank you! Your submission has been received!
Oops! Something went wrong while submitting the form.
END_OF_DOCUMENT_TOKEN_TO_BE_REPLACED