All National Weather Service offices in the U.S. will upgrade their Doppler radar to dual-polarization radar. Here’s why that will provide better forecasts.

The National Weather Services across the United States are upgrading to better radar technology that can provide meteorologists better radar data that can improve warnings and lead time. The upgrade, called Dual Polarization (aka dual-pol), will be installed in all 160 National Weather Service offices. The standard Doppler radar transmits and receives information horizontally. With the dual-pol upgrade, meteorologists will be able to transmit and receive information in both horizontally and vertically in the atmosphere. These upgrades will improve the accuracy and identification of precipitation types, precipitation estimates, and even be able to view tornadoes better. These upgrades will continue across the United States and all offices should have the dual polarization technology installed by May 2013.

The Doppler radar used at the National Weather Services in the United States are called the WSR-88D. When radar is used, it detects atmospheric objects in the air. It can detect precipitation in the air such as rain and hail, and it can also depict non-weather objects such as aircraft, birds, and bugs. When a beam exits the old radar, it only measures things in the air horizontally. The old radar allows us to see a rough estimate of the intensity of precipitation, the speed and direction of the precipitation, but provides very little information regarding precipitation type. With the dual-pol upgrade, the radar will have a better handle of the shape and size of that object suspended in the air as the beams travel both horizontally and vertically. In a way, it gives meteorologists a clearer image of exactly what they are looking at.

This image shows how the dual polarization with the WSR-88D radar works. Note: transmits and receives signals both horizontally and vertically. Image Credit: NOAA

As of today, at least 20 dual polarization radars have been installed across the United States. It typically takes up to two weeks for this upgrade to take place. 109 National Weather Service sites are scheduled for the upgrade this year alone. When the upgrade is taking place, the radar site will be down. Meteorologists will then depend on neighboring radars at nearby weather services if it is needed. This project is estimated to cost nearly $50 million dollars and should be completed by May 2013.

Dual polarization will improve flash flood warnings, severe thunderstorm warnings, and tornado warnings. The output of the dual pol radar will allow meteorologists to see more debris within the storm that indicates a possible tornado. Before hand, we could only detect debris within a severe thunderstorm when the tornado was hitting a populated area and was at a fairly significant strength. These images were called debris balls that showed a higher dBz (decibels of z) or higher reflectivity (brighter colors).

The EF-5 tornado that hit Joplin, Missouri in May 2011. Radar indicated a debris ball which showed brighter colors (high DBZ) indicating debris in the air.

Dual polarization will add three new base products that meteorologists can use to further estimate precipitation. They are the Differential Reflectivity (ZDR), Correlation Coefficient (CC), and Specific Differential Phase (KDP).

The ZDR will show the difference between the horizontal & veritical reflectivity factors (units dBz): 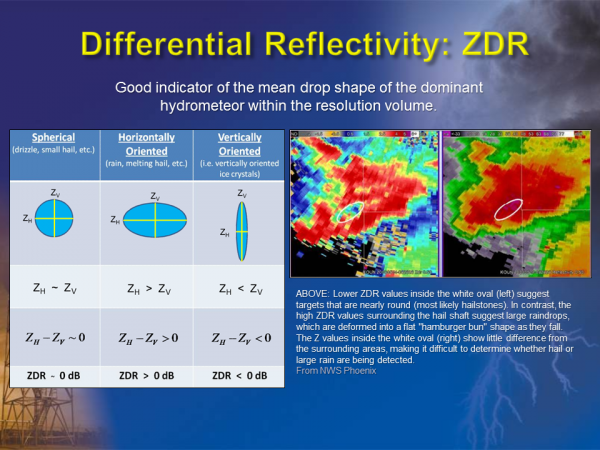 The CC will measure of how similarly the horizonal and vertical pulses are behaving in a pulse volume: 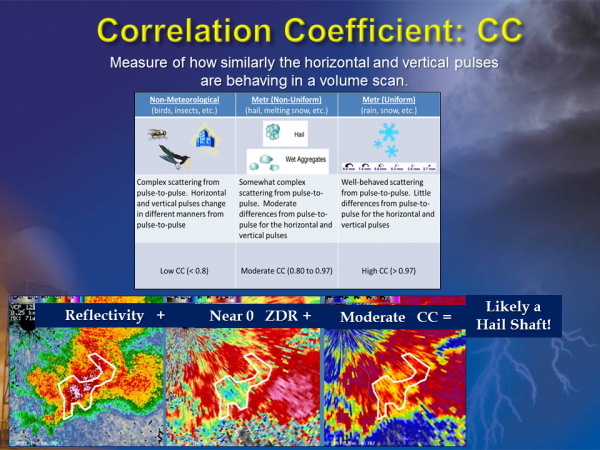 The KDP is the range derivative of the differential phase shift between the horizontal and vertical pulse phases: 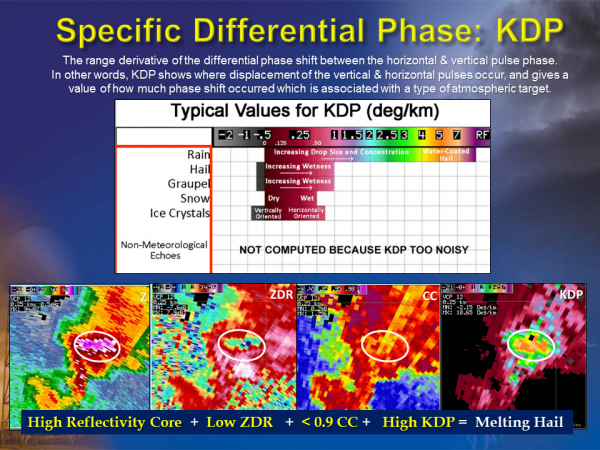 Bottom line: The Dual polarization of the WSR-88D radars are slated to be complete by May 2013. These upgrades will allow meteorologists to have a better idea of precipitation types such as rain, snow, sleet, or hail. Rainfall estimates could improve, because before hand, hail or ice particles would contaminate the rainfall estimates in various areas. The dual pol technology receives and transmits pulses both horizontally and now vertically. Meteorologists will be able to determine the intensity of the precipitation as it falls. These upgrades will likely improve warnings and provide the public longer lead times. For more information on how Dual Polarization works, please visit this link from NOAA.