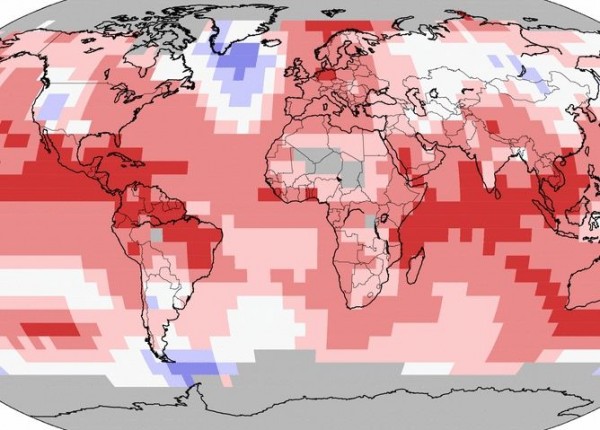 View larger and view complete diagram. | November 2015 was the warmest November on record. Via NOAA.

It has been an exceptionally warm couple of months – in fact, a warm year – across the entire globe. NOAA’s National Centers for Environmental Information (NCEI) said on Thursday (December 17, 2015) that November 2015 was the warmest November on record by an unusually large margin. NOAA commented:

The November average temperature across global land and ocean surfaces was 1.75°F (0.97°C) above the 20th century average. This was the highest for November in the 1880–2015 record, surpassing the previous record set in 2013 by 0.27°F (0.15°C), and marking the seventh consecutive month a monthly global temperature record has been broken.

November’s departure from average temperatures — 1.75 degrees — was also the second-highest out of any month in NOAA’s 136-year (1,631-month) period of record-keeping.

November 2015’s warmth makes the year-to-date period (January – November) the warmest such period on record, according to both NOAA and NASA. The strong ongoing El Niño is playing a role in this unusual warmth. Jeff Masters at wunderground.com said:

Strong El Niño events release a large amount of heat to the atmosphere, typically boosting global temperatures by at least 0.1°C. This extra bump in temperature, when combined with the long-term warming of the planet due to human-caused emissions of heat-trapping gases like carbon dioxide, makes it virtually certain that 2015 will be Earth’s second consecutive warmest year on record.

The lingering warmth from El Niño is likely to make 2016 a good bet to exceed even 2015’s warmth.