Novel carbon structures may exist deep within the Earth

Two new studies shed light on how carbon is stored deep within the Earth – in Earth’s mantle – which has not yet been penetrated.

The storage of carbon deep within the Earth plays an important role in the global carbon cycle. But Earth’s deep interior is a difficult place to study, and little is known about the structure and stability of carbon compounds within Earth’s mantle – a mysterious and so far impenetrable layer of Earth below our planet’s crust.

The mantle is the layer of Earth below our planet’s crust.

Two new scientific studies published in Proceedings of the National Academy of Sciences describe how carbon is stored deep within the Earth as magnesite, siderite, nanodiamonds, and methane-derived hydrocarbons. These results are derived not by looking within the mantle directly – since that is not possible – but through the use of instruments in the laboratory that can mimic the mantle’s high temperatures and pressures.

During the geological carbon cycle, carbon dioxide gets washed out of the atmosphere by rainwater where it combines with calcium in the Earth’s crust and oceans to form carbonates: carbon structures containing one carbon and three oxygen atoms.

Carbonates ultimately sink to the bottom of the ocean where they are pulled into the mantle during the subduction of tectonic plates – that is, the process by which one plate slides under another. It’s only during during volcanic eruptions that carbon eventually returns to the atmosphere as carbon dioxide. 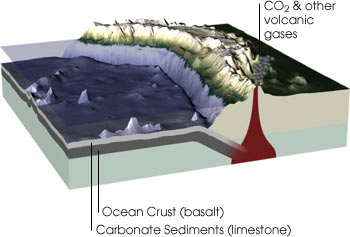 The composition of carbon compounds in Earth’s interior represents a bit of a black box for geochemists because of the difficulty in gaining access to the mantle. High temperatures and pressures prevent drills from reaching the mantle, which begins at approximately 30 kilometers (19 miles) below the surface of the Earth.

Fortunately, new technologies in the laboratory are allowing scientists to predict the carbon composition of Earth’s deep interior. Laboratory instruments can now mimic the high temperatures and pressures associated with the mantle.

Scientists from France subjected carbonates to a range of temperatures and pressures that exist at depths of 1,800 kilometers (1,119 miles). This is deep within the mantle, which extends to 2,900 kilometers (1,800 miles). These scientists recovered the carbon as magnesite (magnesium containing compound), siderite (iron containing compound) and nanodiamonds. They also detected small amounts of carbon monoxide. Their study titled “New host for carbon in the deep Earth” was published in the March 29, 2011 issue of Proceedings of the National Academy of Sciences.

In a second study, scientists from the United States and Germany subjected methane (a molecule with one carbon and four hydrogen atoms) to a range of temperatures and pressures like those that exist at depths of 64 to 153 kilometers (40 to 95 miles), and discovered the formation of hydrocarbons with multiple carbon atoms. The second study was titled “Stability of hydrocarbons at deep Earth pressures and temperatures,” and it was published in the April 26, 2011 issue of Proceedings of the National Academy of Sciences.

In a press release, Giulia Galli, co-author of the April study and professor of chemistry and physics at the University of California at Davis said:

Our simulation study shows that methane molecules fuse to form larger hydrocarbon molecules when exposed to the very high temperatures and pressures of the Earth’s upper mantle. We don’t say that higher hydrocarbons actually occur under the realistic ‘dirty’ Earth mantle conditions, but we say that the pressures and temperatures alone are right for it to happen.

Hydrocarbons in the Earth’s crust are the building blocks for crude oil and natural gas. These commercial hydrocarbons are believed to be derived solely from the remains of living organisms that have been buried under layers of sediments. The new research on hydrocarbon formation within the mantle of the Earth raises the possibility that non-biologically derived hydrocarbons could be present in some areas of Earth’s crust such as at rifts or subduction zones.

Professor Galli is co-chair of a new collaborative effort at the Deep Carbon Observatory that investigates the physics and chemistry of deep carbon. The Deep Carbon Observatory is a large international initiative supported by the Alfred P. Sloan Foundation, and is dedicated to achieving a transformational understanding of Earth’s deep carbon cycle.