Earthquake activity in northwest Nevada over the past week has been more than in previous months combined, says the Nevada Seismological Laboratory. 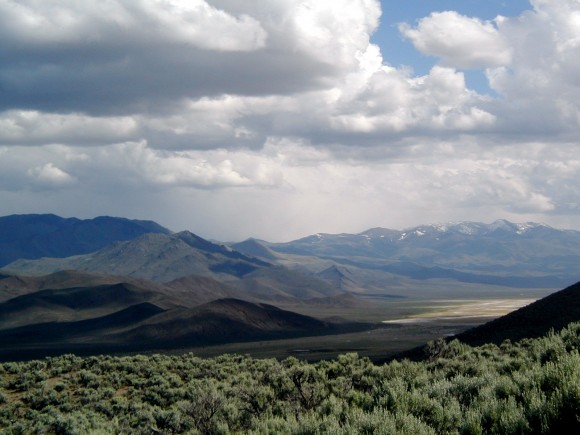 The Nevada Seismological Laboratory is in contact with local residents in hopes of deploying instruments near the swarm in the upcoming week … Residents of northwest Nevada have expressed an eagerness to help as they are feeling the daily barrage of M3 and M4 earthquakes.

The swarm is centered about 40 miles southeast of Lakeview, Oregon. It’s centered on a very small area, only about 7 miles long and about 2 miles at its widest point. It’s a sparsely populated area, a plain of dry alkali lakebeds. The Sheldon National Wildlife Refuge and the Summit Lake Indian Reservation are to the east. The Black Rock Desert is to the south. 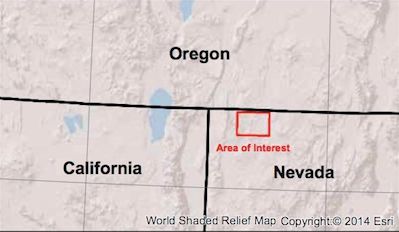 Location of ongoing Nevada earthquake swarm, which began in July 2014.

People want to know if the ongoing earthquake swarm in this region might indicate a large quake to come. Since earthquakes cannot be predicted, there’s no real answer to that question. All experts can do is point to similar events in the past.

Nevada’s 2014 earthquake swarm compares with a swarm in and around Adel, Oregon in 1968. The Oregon swarm also lasted several months and caused moderate damage; it included three events of approximately magnitude 5.

Another comparison is the 2008 Mogul-Somersett swarm near Reno, Nevada. AP reported:

Some swarms in the past have culminated in larger quakes before settling down, but it is impossible to say if this one will. In 2008, a swarm west of Reno, Nevada, included a magnitude 5.0 temblor that cracked walls in about 100 houses in the bedroom community of Mogul, Nevada. Pictures were knocked off walls, furniture was upended, and glassware was broken. Overall damage was estimated at $1 million.

Following any sequence of earthquakes similar to what is occurring in northwest Nevada, there is a small increase in the probability of a larger event. Whether a larger event will occur in the northwest Nevada swarm cannot be predicted or forecast. However, large earthquakes can happen anywhere in Nevada, and we encourage citizens to take steps to prepare for the potential for strong ground shaking.

According to the Nevada Bureau of Mines and Geology’s introduction to Nevada’s earthquake hazards:

The state of Nevada is located in ‘earthquake country.’ It lies within the Basin and Range structural and geomorphic province, a region that is actively extending, or being pulled apart in roughly a northwest-southeast direction. The Basin and Range province is riddled with active faults and is one of the most seismically active regions in the United States.

The 1915 Pleasant Valley, Nevada, earthquake of October 15, 1915, created a series of spectacular normal-fault scarps in central Nevada. Image and more info via johnmartin.com

The largest known earthquake in Nevada, since records have been kept, was a 7.1-magnitude quake on October 3, 1915 in the north-central part of Nevada, near a place called Pleasant Valley. The U.S. Geological Survey (USGS) says this area was “almost uninhabited.” For that reason, property damage minimal. USGS wrote of the 1915 quake:

One of the most striking effects of this earthquake was the large increase (and decrease) in the flow of springs and streams throughout northern Nevada. Cracks formed in unconsolidated materials for considerable distances. Felt from the State of Oregon to southern California and from the Pacific coast to beyond Salt Lake City, Utah.

Read more about the 1915 Pleasant Valley earthquake from USGS.

Real-time earthquake information earthquakes is available at https://www.seismo.unr.edu, and https://earthquake.usgs.gov/earthquakes/map.

Bottom line: The ongoing earthquake swarm in northwest Nevada intensified over the past week. The Nevada Seismological Laboratory said there was more earthquake activity in this area in the past week than in previous months combined.