When mammals switched from nights to days

Mammals once were night creatures. A new study suggests they became active in daylight after the dinosaurs went extinct, 66 million years ago. 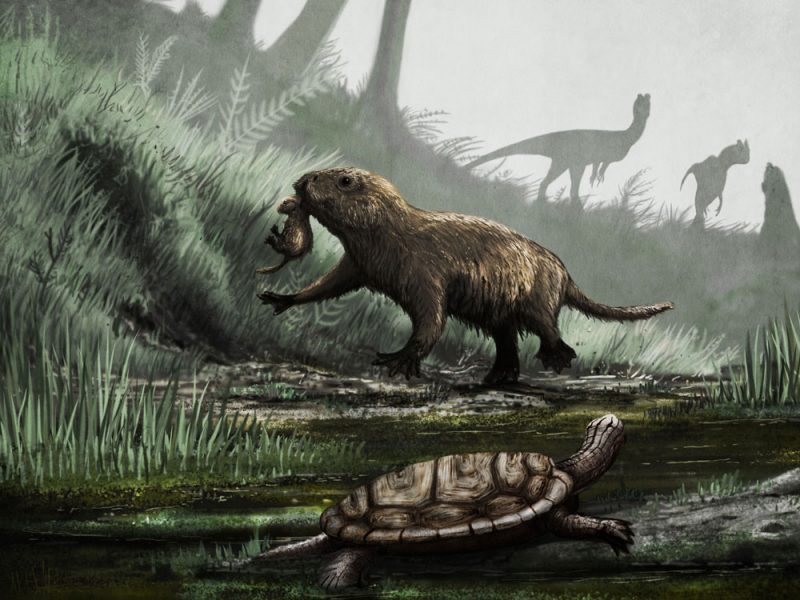 An artist’s impression of Mesozoic animals. It shows Dilophosaurus (dinosaur) at the back, Kayentatherium (Mesozoic mammal) in the center, and Kayentachelys (turtle) at the front. Image via Mark Witton.

According to a long-standing theory, the common ancestor to all today’s mammals was nocturnal – active only at night. When did mammals begin to be active during the daytime? A new study, published November 6, 2017 in Nature Ecology & Evolution, suggests that mammals began switching to daylight activities after the dinosaurs were wiped out, some 66 million years ago.

The research team analyzed data on 2,415 species of mammals still alive today. They computer algorithms to reconstruct the likely activity patterns of these ancient ancestors, which lived millions of years ago. The results of the study indicate that mammals switched to daytime activity shortly after the dinosaurs disappeared.

But this change didn’t happen overnight, said the researchers.

Instead, it involved an intermediate stage lasting millions of years of mixed day-and-night activities. This stage coincided with the events that decimated the dinosaurs.

Roi Maor is a PhD student at Tel Aviv University and lead author of the study. Maor said in a statement:

We were very surprised to find such close correlation between the disappearance of dinosaurs and the beginning of daytime activity in mammals, but we found the same result unanimously using several alternative analyses.

The team found that the ancestors of simian primates – such as gorillas, gibbons and tamarins – were among the first to give up nocturnal activity altogether. This discovery fits well, the researchers said, with the fact that these primates are the only mammals that have evolved adaptations to seeing well in daylight.

Kate Jones of University College London (@ProfKateJones on Twitter), is co-author of the study. She said:

It’s very difficult to relate behavior changes in mammals that lived so long ago to ecological conditions at the time, so we can’t say that the dinosaurs dying out caused mammals to start being active in the daytime. However, we see a clear correlation in our findings.

Bottom line: According to a new study, mammals started being active in the daytime after dinosaurs were wiped out about 66 million years ago, coinciding with the demise of the dinosaurs.