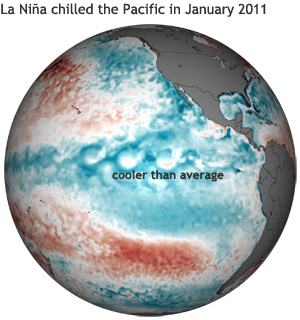 The lead character in the 2011 climate story was La Niña — the cool phase of the El Niño-Southern Oscillation. It caused a cooling in the central and eastern tropical Pacific at both the start and the end of the year. These natural cooling events have a long reach, according to NOAA. Many of the big climate events of 2011, including famine-inducing drought in East Africa, an above-average hurricane season in the Atlantic, and record rainfall in many parts of Australia, are common side effects of La Niña. Image Credit: NOAA

On Tuesday, July 10, 2012, NOAA released the 2011 State of the Climate report. This report is a peer reviewed paper that was compiled by 378 scientists from 48 countries around the world. This report looks at the extreme weather events that occurred in 2011. It also analyzes global climate indicators and monitoring stations and instruments used on land, sea, ice, and sky. The report says that 2011 was the coolest year on record since 2008, but it remained above the 30-year average (1981-2010). La Nina – the cool phase of the El Niño-Southern Oscillation – was the major cooling factor, globally, in 2011. At the same time, the influence of human-caused global warming on the climate system continues to grow. The report identified “human fingerprints” in more than two dozen climate indicators examined by this international research team — from air temperatures to ocean acidity. More specifics of the report below.

According to NOAA, La Niña played a major role in the crazy weather events that occurred in 2011, such as the violent tornado outbreaks in the United States, severe droughts in southern United States, northern Mexico, and East Africa, and one of the worst summer heat waves in central and southern Europe since 2003.

At the same time, NOAA’s 2011 State of the Climate report also acknowledges that Arctic ice is melting, greenhouse gases are increasing, and temperature extremes are increasing. Scientists are always unwilling to tie specific weather events to global warming. But as 2012 has progressed, we’ve seen more scientists willing to suggest that some of what we’ve experienced in recent months and years looks like what climate models suggest will happen in a warming world. 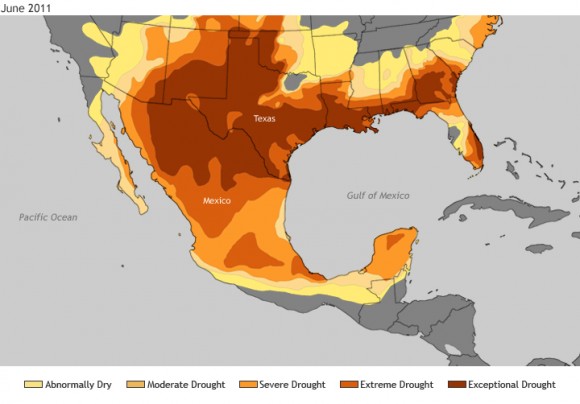 Further demonstrating the ability of La Niña to tip a region’s climate toward its natural extremes, says NOAA, La Niña likely contributed to the continuation of historic drought in northern Mexico and the southern United States in 2011. In some parts of Texas, New Mexico, Oklahoma, and Louisiana summer heat conspired with the exceptional dryness to break records for cumulative drought impacts on water storage, including reservoirs and ground water. Image Credit: NOAA

Before going on to discuss NOAA’s 2011 State of the Climate report specifically, let me note what’s important to remember about this report. It is peer reviewed by hundreds of scientists around the globe. Much of what you hear from climate skeptics comes from a handful of voices. This report is from 378 scientists from 48 countries.

The fact is, the vast majority of climate scientists believe humans are influencing climate change in the recent decades. Even after looking at natural cycles – such as solar cycles and volcanoes – it appears that something else is influencing our climate. Studies have shown again and again that the vast majority of climate scientists believe we humans are the something else: human activities, specifically the increase in greenhouse gases, are causing Earth to warm. 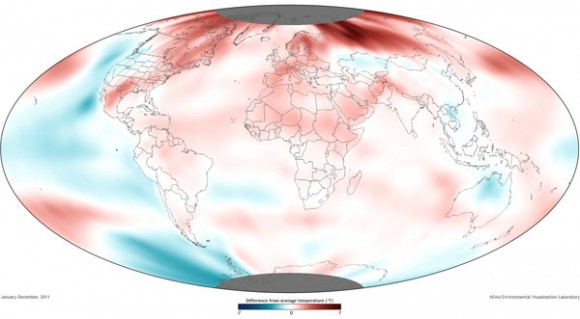 Meteorologists, in particular, have been known in the past, as a group, to doubt human-caused climate change. This year, though, the President-elect of the American Meteorological Society and professor at the University of Georgia Marshall Shepherd wrote:

These are peer-reviewed studies not opinion editorials, sound bites, or blogs. In science, the peer-review process is a way to evaluate science results/methods and assure that there is some rigor and methodology to the approaches. It also assures that the data and methods followed by the scientists are clearly outlined so that anyone (capable) can repeat the work. Peer-reviewed science doesn’t mean that work is absolute, but in science, if a majority/consensus of papers shows a result then, until a credible, published (peer-reviewed) alternative is presented, tested, and then supported multiple times, the consensus position holds as the prevailing viewpoint. The notion of consilience [editor’s note: the unity of knowledge] is very important.

Along those lines, Bruce DePuyt and Meteorologist of WJLA Bob Ryan produced a 30-minute interview talking about climate change with a well known and respected climatologist Michael Mann, who currently teaches at Penn State University. They talk about Climategate, the infamous Hockey Stick diagram, and how humans influence the overall climate. If you have time, you should definitely check this video out. The direct link can be found here.

Back to the 2011 State of the Climate report. Here are key highlights and findings from this report directly from(NOAA News):

-The UK experienced a very warm November 2011 and a very cold December 2010. In analyzing these two very different events, UK scientists uncovered interesting changes in the odds. Cold Decembers are now half as likely to occur now versus fifty years ago, whereas warm Novembers are now 62 times more likely.

– La Niña-related heat waves, like that experienced in Texas in 2011 where many areas experienced consecutive days over 100° Fahrenheit, are now 20 times more likely to occur during La Niña years today than La Niña years 50 years ago.

– Major greenhouse gas concentrations, including carbon dioxide, methane, and nitrous oxide, continued to rise. Carbon dioxide steadily increased in 2011 and the yearly global average exceeded 390 parts per million (ppm) for the first time since instrumental records began. This represents an increase of 2.10 ppm compared with the previous year. There is no evidence that natural emissions of methane in the Arctic have increased significantly during the last decade.

– Four independent datasets show 2011 among the 15 warmest since records began in the late 19th century, with annually-averaged temperatures above the 1981–2010 average, but coolest on record since 2008. The Arctic continued to warm at about twice the rate compared with lower latitudes. On the opposite pole, the South Pole station recorded its all-time highest temperature of 9.9°F on December 25, breaking the previous record by more than 2 degrees. Note: The South Pole/Antarctica region continues to grow ice across the region. Meanwhile, the Arctic ice continues to melt and decrease.

– Ocean heat content, measured from the surface to 2,300 feet deep, continued to rise since records began in 1993 and was record high. 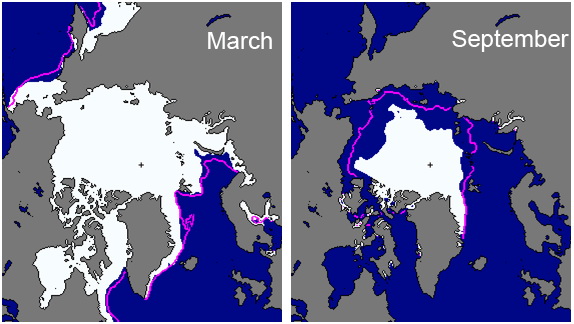 Maximum and minimum sea ice extent in the Arctic for 2011. Image Credit: NOAA

– Oceans were saltier than average in areas of high evaporation, including the western and central tropical Pacific, and fresher than average in areas of high precipitation, including the eastern tropical South Pacific, suggesting that precipitation is increasing in already rainy areas and evaporation is intensifying in drier locations.

– The floods experienced in Thailand cannot be directly related to global warming and climate change as rainfall rates in the region were not completely unusual. In fact, reservoir policies and increased construction on the flood plain were the primary reasons why flooding occurred.

You can read the full report by clicking this link.

Bottom line: NOAA released the State of the Climate 2011 report that was compiled by 378 scientists from 48 countries around the world. The report shows human fingerprints identified in more than two dozen climate indicators examined by climate scientists. It is important to note that we cannot single out one extreme event and point to global warming as the cause. However, as weather events continue to become extreme, these trends continue to grow and support what climate models indicate will occur in a warming climate. The extremes will become more common, in other words, with some areas receiving extensive droughts will other locations experience significant flooding. The report shows that a lot of the extreme events were also influenced by back-to-back La Niñas. La Niña has shown that when it occurs, global temperatures decrease slightly. In fact, 2011 was the coolest year recorded since 2008. However, it is considered to be one of the warmest La Niña years recorded.