On March 15, NOAA issued its 2018 three-month U.S. Spring Outlook. This year’s forecast suggests a moderate risk of flooding in the Ohio River Valley basin and lower Mississippi River, where streamflows and soil moisture are well above normal after major flooding from recent heavy rainfall.

Meanwhile, drought is forecast to persist or worsen in the southern and central Plains, Southwest and California, according to the NOAA scientists, as warmer and drier-than-normal weather is likely to engulf the region this spring. 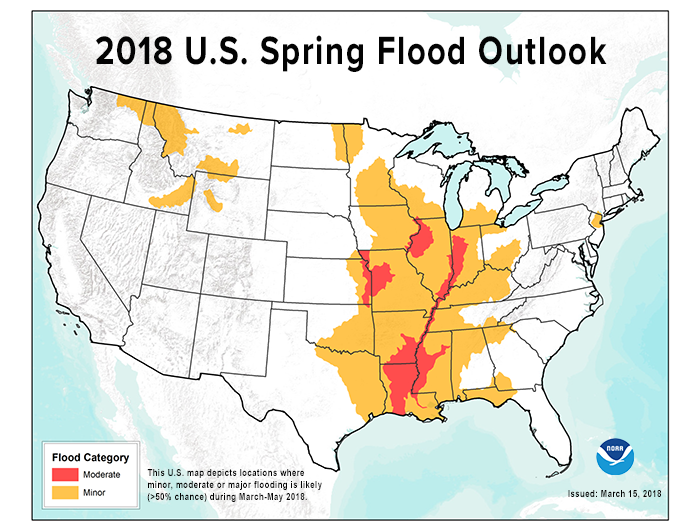 2018 U.S. Spring Flood Outlook: This map depicts the locations where there is a greater than 50 percent chance of moderate or minor flooding during March through May, 2018. Image via NOAA.

Even ahead of the typical spring flood season, heavy rainfall has already caused damaging floods in the Ohio and Mississippi River basins and brought record flooding to the lower Great Lakes region. Thomas Graziano is director of NOAA’s Office of Water Prediction. He said in a statement:

Flooding that began in mid-February is still ongoing for parts of the middle and lower Mississippi Valley and is forecast to continue for at least the next few weeks.

The flood risk outlook, said NOAA, is based on factors such as the current conditions of snowpack, drought, soil moisture, frost depth, streamflow and precipitation. Local heavy rainfall, especially associated with thunderstorms, can occur throughout the spring and lead to flooding even in areas where overall risk is considered low.

A springtime scene in Anza Borrego Desert State Park in California, taken in March 2017. In NOAA’s 2018 Spring Outlook, forecasters expect drought to persist in the U.S. Southwest and south-central Plains during the next 3 months. Photo via Flickr user minimackdik/WeatherNation/NOAA.

NOAA reports that more than a quarter of the country is currently experiencing drought from Southern California into the Southwest, the northern and southern High Plains, and parts of the Southeast. The outlook suggests that drought is likely to persist in most of these areas and potentially expand by late June. 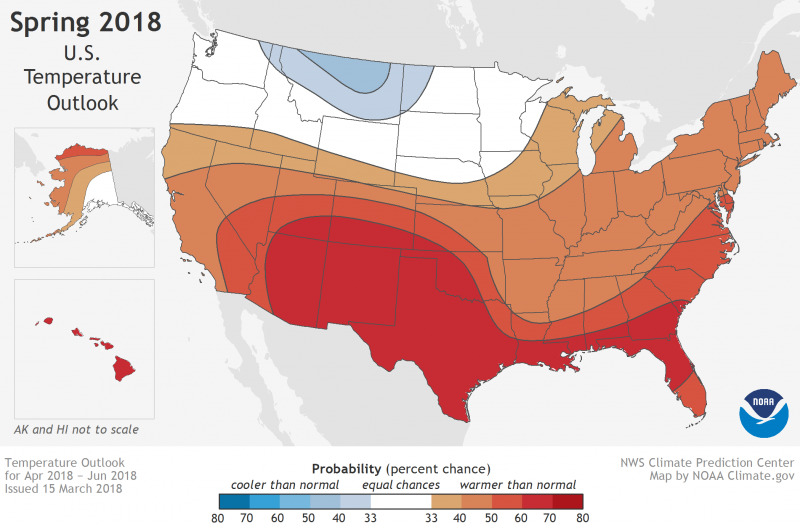 Areas in the U.S. where the average temperature for April-June 2018 is favored to be 1/3 higher or lower relative to the temperatures recorded in the years 1981-2010 are marked in reddish (higher) or blue (lower). Within a given area, the intensity of the colors indicates higher or lower chances for a warm or a cool outcome, not bigger or smaller anomalies. For example, both Texas and Tennessee face better than even chances of experiencing well above average spring temperatures, but the chances are higher in Texas (60-70%) than in Tennessee (40-50%). Image via NOAA Climate.gov, based on data from NOAA CPC.

Through June, odds favor above-average temperatures for the southern two-thirds of the U.S., extending from California across the central Plains and into the Northeast, according to the report.

Below-average precipitation is anticipated across much of the West and South, extending from California to the south-central Plains, including Texas and parts of Oklahoma where drought is currently affecting the region. Below-average precipitation is also expected for a small area across the south coast of Alaska. It is most likely to be wetter-than-average for much of the northern U.S., extending from the northern High Plains, across to the Great Lakes and Ohio Valley, eastward to include the mid-Atlantic and Northeast as well as for northern Alaska and Hawaii.

Bottom line: NOAA’s 2018 3-month weather forecast for flooding and temperatures for the U.S. was issued March 15.