For about a week in mid-April, 2010, air travel across Europe came to a halt when a volcano in Iceland erupted, ejecting fine ash that dispersed across European airspace. The decision to halt air traffic stranded 10 million passengers, and cost 2.5 billion Euros (about US$3.4 billion), bringing the decision-makers under considerable criticism.

But a recent study has vindicated these officials. Scientists from the Universities of Copenhagen and Iceland report, in the April 25, 2010 Proceedings of the National Academy of Sciences, that volcanic ash aloft in European airspace from that eruption had, in fact, posed a serious hazard to aircraft. More significantly, the team has developed a new protocol to help officials rapidly assess risks to air travel during future volcanic eruptions.

Composite map of volcanic ash cloud from April 14 to 25, 2010, based on data by the London Volcanic Ash Advisory Center’s website. Credit: Reisio via Wikimedia Commons.

The Eyjafjallajökull volcano in Iceland was responsible for grounding planes across Europe from about April 15 to 23, 2010, and again in western Europe in early- and mid-May. The eruption occurred beneath glacial ice. Meltwaters from the glacier mixed with lava, creating an explosive eruption that ejected very small particles of ash more than 9 kilometers (5.6 miles) into the atmosphere, where it was dispersed over much of Europe by the jet stream.

Airborne volcanic ash, even very small particles, are hard and sharp. An extended plume of ash is capable of causing significant damage to aircraft in flight. Fine ash can sandblast the plane body and damage critical moving parts like propellers and gears. It can severely abrade cockpit windows to reduce visibility. Particles can contaminate fuel and water, and disrupt electrical systems. Ash melting inside the combustion chamber of engines can stick to critical components, causing engine failure.

In 1982, a British Airways 747 carrying 263 passengers and crew unknowingly flew into an ash plume from the erupting Mount Galunggung, in Java, Indonesia. Ash sandblasted the aircraft, and caused all four engines to shut down. With no power, the plane began a plunge from 36,000 feet (11,000 meters). Fortunately, as the aircraft got below the plume, pilots were able to restart three engines and recover control of the plane at just 12,000 feet (3,700 meters). They made an emergency landing, the pilot guiding the plane down to safety by looking out a two inch strip of the side window that had not been affected by the sandblasting. 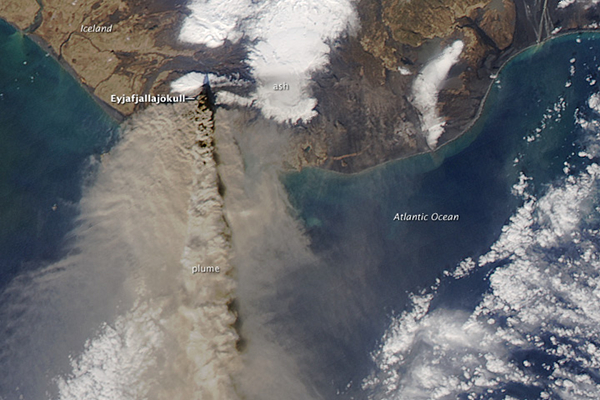 Watching disruptions to air travel caused by the ash plume, Professor Susan Stipp at the University of Copenhagen wondered about the criteria being used to determine if it was safe to fly in the extended ash cloud. In a press release, she said,

Aviation authorities were sitting on a knife-edge at the centre of a huge dilemma. If they closed airspace unnecessarily, people, families, businesses and the economy would suffer, but if they allowed air travel, people and planes could be put at risk, perhaps with tragic consequences.

I was surprised to find nothing in the scientific literature or on the web about characterizing ash to provide information for aviation authorities. So we decided to do something about it.

She contacted her friend and colleague, Professor Siggi Gislason at the University of Iceland in Reykjavik with an idea of how to study the ash. So, while the eruptions were still going strong, Gislason and a student collected fresh samples of ash and sent it to Stipp in Copenhagen for analysis at the university’s Nano-Science Centre, where she and her team could study the ash particles reactions with air, water and oil using specialized instruments for studying nanoparticles.

This video report from ITN reporter John Irvine, on April 19, 2010, shows spectacular footage taken from a helicopter flying close to the plume.

Their findings confirmed that aviation safety officials in Europe had made the right call. The physical properties of the ash, along with the intensity of volcanic activity, had been dangerous enough to warrant shutting down European airspace.

Stipp, Gislason, and their teams also created a new protocol to help officials decide on whether or not to ground flights during future volcanic eruptions. In order to make that decision, analysts would need to know three main characteristics about the ash: size, shape, and hardness.

These properties, said Stipp could be learned using standard techniques to analyze the ash at earth science laboratories. That information, along with estimates of the amount of ash from the volcano, height of the plume, distribution of particle sizes, and dispersion rate of the particles across the atmosphere, could be used to model the potential safety risks for aircraft operations. These determinations could be done rapidly: within an hour of receiving an ash sample, a lab will be able to determine toxicity that could endanger people and animals in the vicinity of the ash fallout. In 12 hours, they could report on the ash cloud’s sandblasting capability for damage to aircrafts’ body and jet engines. Within 24 hours, scientists would have results on the range of ash particle sizes, information needed to predict the location and extent of the ash plume.

The eruption of the Eyjafjallajökull volcano in Iceland released large quantities of very fine ash particles into the atmosphere across Europe. Out of an abundance of caution, officials responsible for aircraft safety closed European airspace, grounding planes for as long as a week, Despite the major inconvenience to passengers and large financial losses for airlines and related industries, new evidence from scientists in Denmark and Iceland shows that officials’ actions most likely saved lives. The scientists have also introduced a new protocol based on ash properties and volcanic eruption characteristics to predict if conditions could be dangerous enough to warrant grounding planes.