Basic facts that paleontologists thought they’d known for 130 years – about dinosaurs’ family trees – might turn out to be wrong. 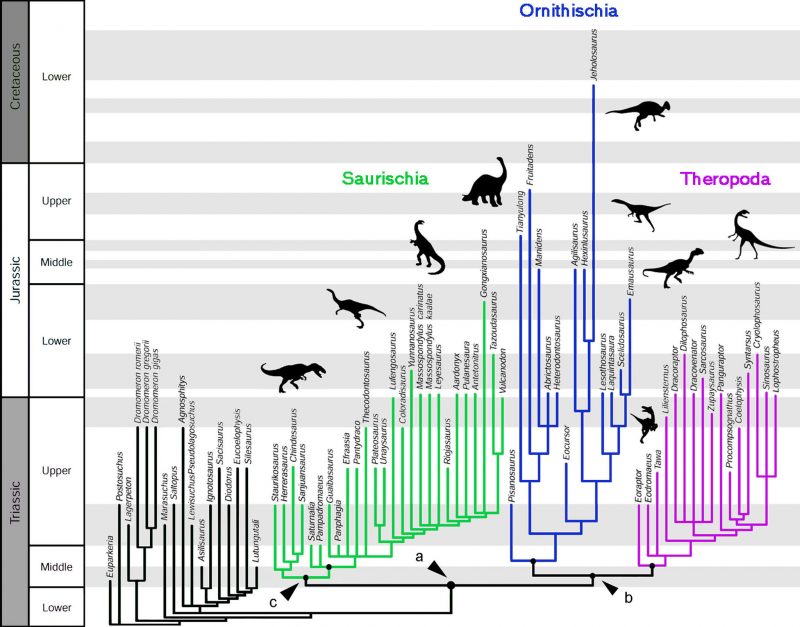 A new study – published March 22, 2017 in the peer-reviewed journal Nature – has paleontologists rethinking what they know about the evolution of dinosaurs. The researchers analyzed fossil data from over 1,000 dinosaur species, drawn from museums around the world. They used a new computer program called TNT to assess 457 anatomical features in the dinosaur fossils. The result is a newly proposed dinosaur family tree, which dramatically alters our knowledge of the evolutionary path of these ancient animals.

For nearly 130 years – since a paleontologist named Harry Seeley first proposed it in 1888 – dinosaurs have been categorized into two main evolutionary branches, based on the development and orientation of their hip bones. Dinosaurs could be either bird-hipped (Ornithischia) or lizard-hipped (Saurischia). 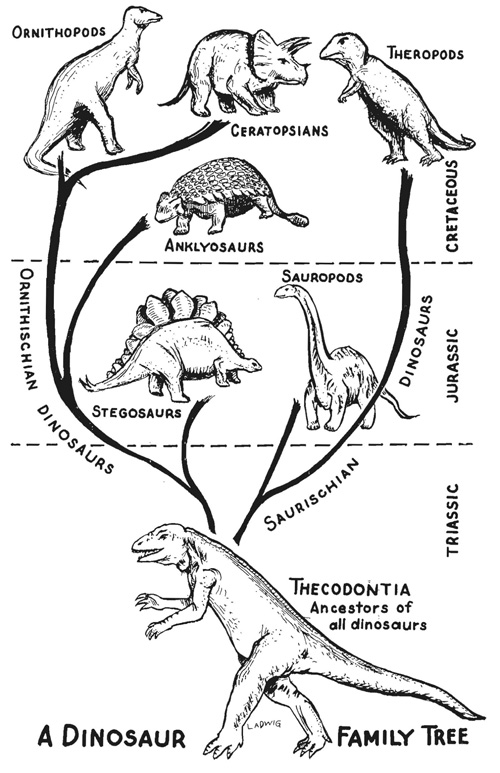 The new study is by Matthew Baron of the University of Cambridge (@MattExtinctions on Twitter) and co-authors David B. Norman, also at University of Cambridge, and Paul M. Barrett of the Natural History Museum in London. Their study relies on the computer program TNT, which has the ability to track and organize fossil data based on the presence of specific anatomical features.

With this new computer program, these scientists have restructured dinosaurs’ evolutionary tree. One result is that, for example, moderns birds and T-Rex may be more related to species like Triceratops than anyone realized before. The new study links Theropods and Ornithischians as common ancestors instead of “distant sister groups.”

This new paper is the result of a quite a comprehensive new … analysis that takes into account a greater number of different dinosaur species and anatomical features than previous studies have done.

Based on the reformatted tree, the study hypothesizes that early dinosaurs began as small, two-footed animals with large grasping hands with an omnivorous diet. Early dinosaurs fossils had both sharp incisor teeth for meat and flatter teeth for plants. Baron commented to the New York Times:

In the very harsh climates of the late Triassic, being a generalist is probably a clever strategy. The ability to run fast and eat anything and grasp with the hands is what gave dinosaurs their advantage.

The new tree also suggests that dinosaurs emerged earlier than previously thought — around 244 million years ago.

But it remains to be seen if this [study] will be the new orthodoxy for the next 130 years. Who knows? Maybe there will be new dinosaurs discovered that overturn this whole thing. We just don’t know.

Bottom line: A new study proposes a new way to understand the evolutionary history of dinosaurs.