The most recent rise in carbon dioxide is the largest annual change seen for this gas since 1984.

A new report from the World Meteorological Organization (WMO) released on September 9, 2014 has detected a substantial rise in the levels of greenhouse gases in the atmosphere. From 2012 to 2013, carbon dioxide concentrations increased by 2.9 parts per million and now total 396 parts per million, according to the report. The most recent rise in carbon dioxide is the largest annual change seen for this gas since 1984. The atmospheric levels of other long-lived greenhouse gases including methane and nitrous oxide have also increased substantially since pre-industrial times, but their rates of increase during 2012 to 2013 were more comparable to those of the past five to ten years.

The Global Atmosphere Watch program of the WMO monitors long-lived greenhouse gases in the atmosphere through a network of hundreds of ground-based monitoring stations and instruments on board ships and aircraft. The data are released through annual bulletins that provide valuable information on the gases that are most responsible for changes in Earth’s climate.

According to the latest bulletin (pdf), atmospheric concentrations of greenhouse gases during 2013 amounted to 396 parts per million for carbon dioxide, 1824 parts per billion for methane and 326 parts per billion for nitrous oxide; these levels are 142%, 253% and 121% of the pre-industrial concentrations, respectively. Emissions of greenhouse gases have been growing because of anthropogenic activities such as the extraction and burning of fossil fuels, cement production, farming, deforestation, and other types of land use change.

Scientists are not yet sure of what caused the jump in the carbon dioxide growth rate during 2012–2013. It is possible that the increase may have been caused by a change in the way the terrestrial biosphere takes up and releases carbon, according to the WMO report.

The oceans, which absorb about 25% of anthropogenic carbon dioxide emissions, are becoming increasingly acidic according to the bulletin. This is because the carbon dioxide gets converted into carbonic acid, which eventually forms bicarbonate and hydrogen ions, and the resulting hydrogen ions increase the acidity levels (lower the pH) of seawater. The report notes that “the current rate of ocean acidification appears unprecedented at least over the last 300 million years, based on proxy-data from paleo archives.” Ocean acidification could have severe impacts on marine life such as plankton, mollusks and coral that have calcified structures that weaken under increased acidity levels. 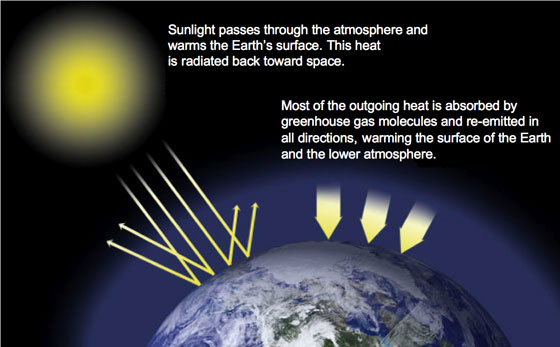 The report’s findings will likely be highlighted during the upcoming United Nation’s Climate Summit in New York on September 23, 2014.

Bottom line: The 2014 Greenhouse Gas Bulletin released by the WMO on September 9, 2014 has detected a substantial rise in the levels of greenhouse gases in the atmosphere. Carbon dioxide concentrations, in particular, rose at a very fast rate during 2012–2013 and concentrations now amount to 396 parts per million.