New record for the coldest place on Earth

NASA scientists have discovered the coldest place on our planet. It’s a high ridge in Antarctica on the East Antarctic Plateau. On a clear winter night, temperatures can dip below -133.6 degrees F (-92 degrees C)

The new record is several degrees colder than the previous low of minus 128.6 F (minus 89.2 C), set in 1983 at the Russian Vostok Research Station in East Antarctica. The coldest permanently inhabited place on Earth is northeastern Siberia, where temperatures dropped to a bone-chilling 90 degrees below zero F (minus 67.8 C) in the towns of Verkhoyansk (in 1892) and Oimekon (in 1933).

Scientists at the National Snow and Ice Data Center made the discovery by analyzing 32 years of data from several satellites that have mapped Antarctica’s surface temperature.

Near a high ridge that runs from Dome Arugs to Dome Fuji, the scientists found clusters of pockets that have plummeted to record low temperatures dozens of times. The lowest temperature the satellites detected was minus 136 F (minus 93.2 C), on Aug. 10, 2010. 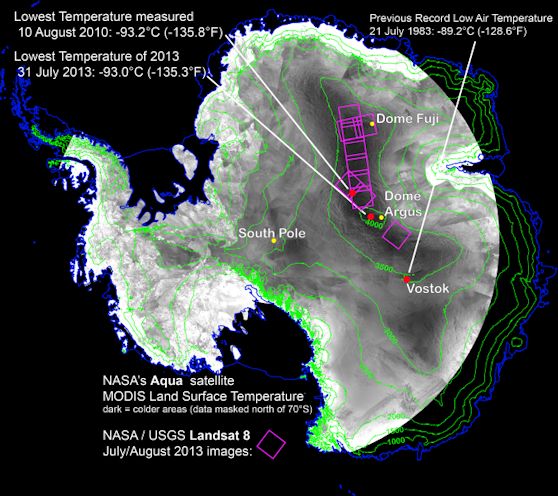 With remote-sensing satellites, scientists have found the coldest places on Earth, just off a ridge in the East Antarctic Plateau. The coldest of the cold temperatures dropped to minus 135.8 F (minus 93.2 C) — several degrees colder than the previous record. Image Credit: Ted Scambos, National Snow and Ice Data Center

The quest to find out just how cold it can get on Earth – and why – started when the researchers were studying large snow dunes on the East Antarctic Plateau. When the scientists looked closer, they noticed cracks in the snow surface between the dunes, which were possibly created when wintertime temperatures got so low the top snow layer shrunk. This led scientists to wonder what the temperature range was, and prompted them to hunt for the coldest places using data from satellite sensors.

Read more about how scientists found and measured Earth’s coldest place, from NASA