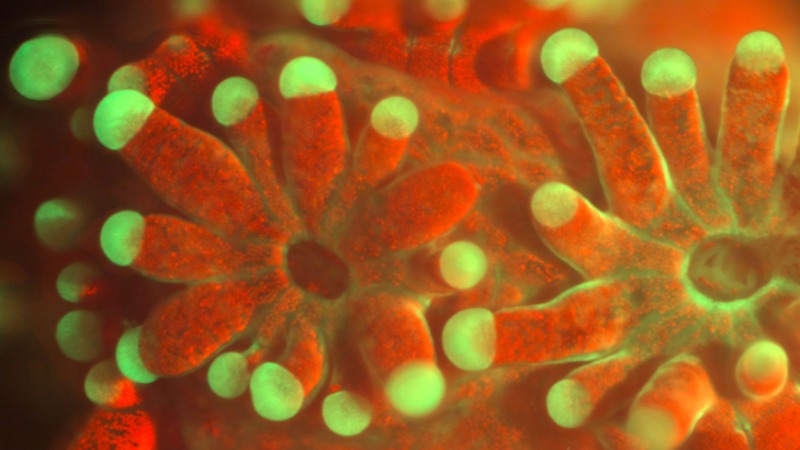 Fluorescent image of the coral Pocillopora damicornis. The field of view is approximately 4.1 x 3.4 mm. Imag via Andrew D. Mullen/UCSD

The Homo sapiens view of our world is all a matter of perspective, and we need to remember that we’re among the larger creatures on Earth. At around 1.7 meters in length, we’re much closer in size to the biggest animals that have ever lived – 30-meter-long blue whales – than the viruses and bacteria that are less than one-millionth our size.

Our relative size and their invisibility to our naked eye makes it easy to forget that there are vastly more of those little guys than us – not just in number, but also in mass and volume. And they’re vital to the health of our planet. For example, every other breath of oxygen you take is courtesy of the photosynthetic bacteria that live in the ocean.

As early microscope pioneer Antony Van Lewenhook discovered approximately 350 years ago, these little “animalcules” are in almost every nook and cranny you can think of on Earth. But until now, we haven’t been able to study most microscopic forms of ocean life in their native marine habitats at sufficient resolution to discern many of their miniature features. This is important, as there are thousands of different millimeter-sized underwater creatures we previously couldn’t study unless they were removed and brought to the lab.

Our new Benthic Underwater Microscope (BUM) changes that. In building our underwater microscopes, we are inspired by oceanographer Victor Smetacek’s question of whether an in situ computerized telemicroscope could “do for microbial ecology what Galileo’s telescope did for astronomy.” Simply put, we hope so. Underwater microscopy can help scientists tackle research questions in new ways. Using the BUM, we’ve already seen some amazing new coral behaviors. 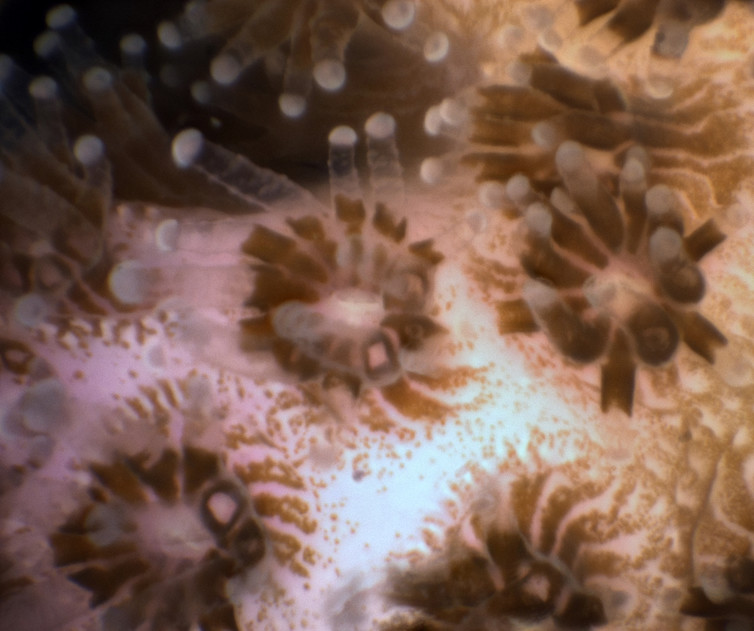 A glimpse of what we’ve been missing: Pocillopora polyps: a 2.8 x 2.4 mm field of view.

When researchers bring marine samples back to the lab, it’s impossible to exactly mimic the environment they came from – what we observe might not perfectly reflect creatures’ real lives. Better, then, to bring the lab to the ocean.

For nearly five years now, our group has been tackling the technical challenges of underwater microscopy with the goal of recording images of marine life at these miniature scales. We aim to explore microscopic life in a variety of natural settings via underwater imaging and video systems.

Previously, there was no technology available to see these tiny things from several centimeters away. The distance is important because we needed to put our components in a waterproof bottle and look out through an underwater port – placing us a bit away from our subjects. Fortunately, with the commercial appearance of our hoped-for “long working distance” lenses, miniature cameras and efficient LED lights, we were able to assemble several underwater microscopes.

There were some technical challenges to overcome. We had to figure out how to illuminate a very tiny area while simultaneously focusing a lens on precisely the same spot. We also weren’t sure we could achieve the mechanical stability necessary to keep our system still enough to get great images. And it was also paramount for a diver to be able to control the system via a computer interface. 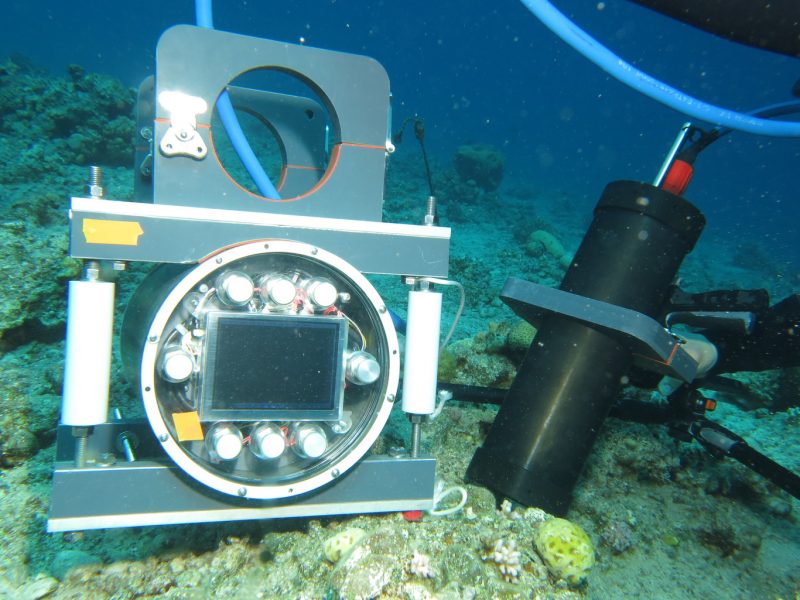 BUM has a high magnification lens surrounded by focused LED lights and a companion computer with ceramic buttons. Image via Andrew D. Mullen/UCSD

After 18 months of work, we’d invented the first underwater microscope that a diver could carry into the field and use to take pictures of seafloor inhabitants at nearly micrometer resolution. Our instrument allows us to clearly see features as small as one-hundredth of a millimeter underwater. An additional feature, a squishy electrically tunable lens, gives us the ability to rapidly focus on the objects that we are imaging. This allows us to capture all parts of an object with substantial three-dimensional relief in focus.

The final system consists of two housings: one for the camera, lights and the lenses, the other for a computer controlling the camera along with a live diver interface and data storage.

After we finished testing the instrument in California, we traveled to Eilat, the southernmost city in Israel, to work with colleagues at the Interuniversity Institute for Marine Sciences. With their help, we set up our system in the Red Sea’s well-preserved coral reefs. 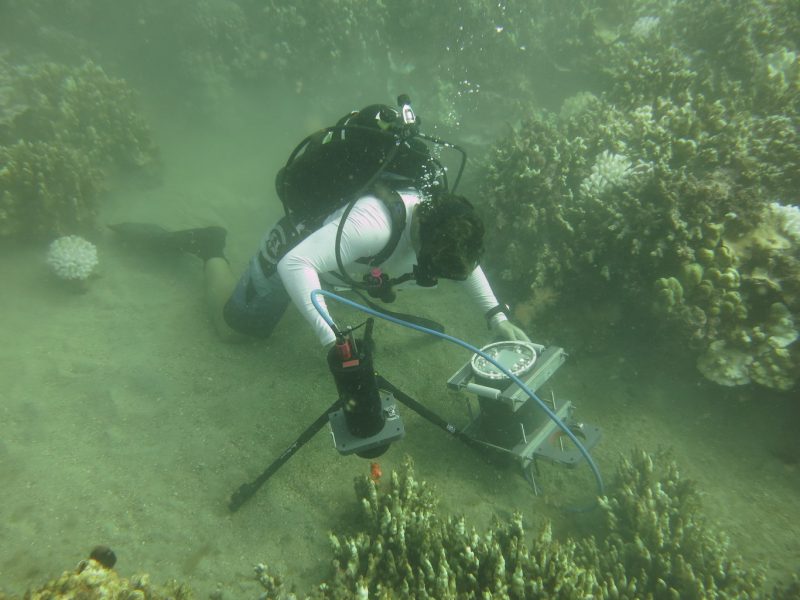 In deploying the instrument, we use an undersea tripod to position the camera housing while resting the computer housing on the seafloor. We then control the system’s parameters through a series of computer screens that culminate in recording the scene.

On our test dives, we saw with unprecedented detail a strange behavior of coral polyps, the tiny individual animals that make up a coral colony. In a never-before-seen action, the polyps periodically embraced their neighbors, potentially to share food, in what we called polyp kissing.

In situ time series video of interaction between the coral Platygyra and four different stimuli. In each frame Platygyra is on the left: top-left Galaxea, top right Stylophora, bottom left mesh net filled with Artemia, and bottom right another colony of Platygyra. Images were captured at night with red light at a frame rate of 1 FPS. The playback is at a speed that is 480 times faster. (Courtesy Andrew D. Mullen/UCSD)

Not all of the interactions were so amorous; when we put different kinds of corals side by side, microscopic warfare broke out. We were surprised to see that at the same proximity, corals of the same species were at peace. This is shown in the lower right corner of the video – the two Platygyra corals are not fighting.

The polyp communities that share connective tissue work together to ward off predators. They’re not hostile to other colonies of their own species. But when confronted with foreigners, or when aiming to expand their territory, they can extrude their digestive organs and rub a digestive enzyme all over the bodies of their enemies, as seen in the videos. We hypothesize, as others have, that some set of chemicals they emit mediates the corals’ awareness of each other. 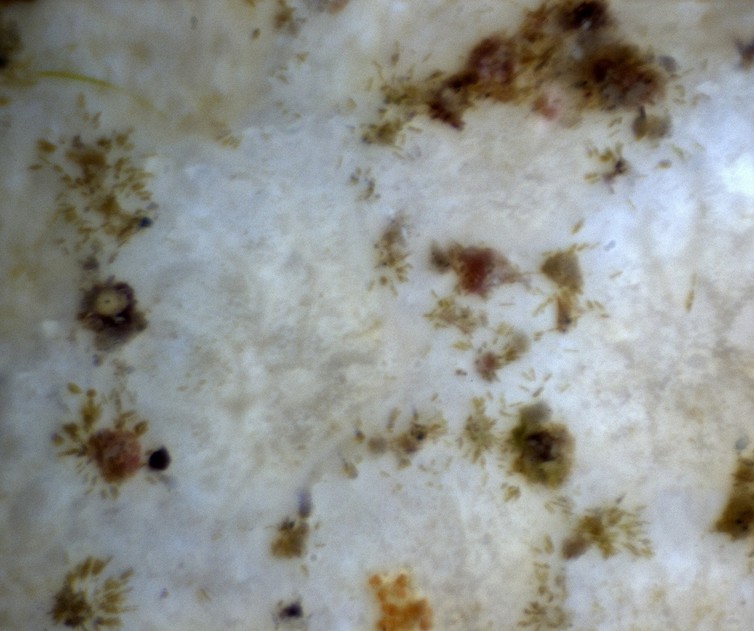 The BUM was able to document algae beginning to colonize the surface of bleached corals that were still alive. 2.82 x 2.36 mm field-of-view. Image via Andrew D. Mullen/UCSD.

In a further investigation, this time in Hawaii, we used the Benthic Underwater Microscope to view the sad consequences of a large-scale bleaching event. For the first time in a natural setting, we examined how algae colonize and overgrow bleached corals at the microscale.

Where to focus in the future

Now that we have this new instrument, hopefully it will open up a whole new realm of scientific inquiry. We imagine researchers will be eager to point the underwater microscope at kelp forests, rocky reefs, sea grass beds and mangroves.

For instance, we’re interested in exploring how kelp propagate as microscopic baby kelp seeds land on rocky areas of the seafloor. Their success and density is important for understanding how kelp forests emerge.

And there are plenty of other questions about coral reefs that the BUM could help investigate. How do coral diseases progress? What happens on a microscopic level when coral polyps bleach? How do corals deal with sedimentation and shed sand? How do coral larvae grow and how are they recruited by a colony? How do corals and algae compete? 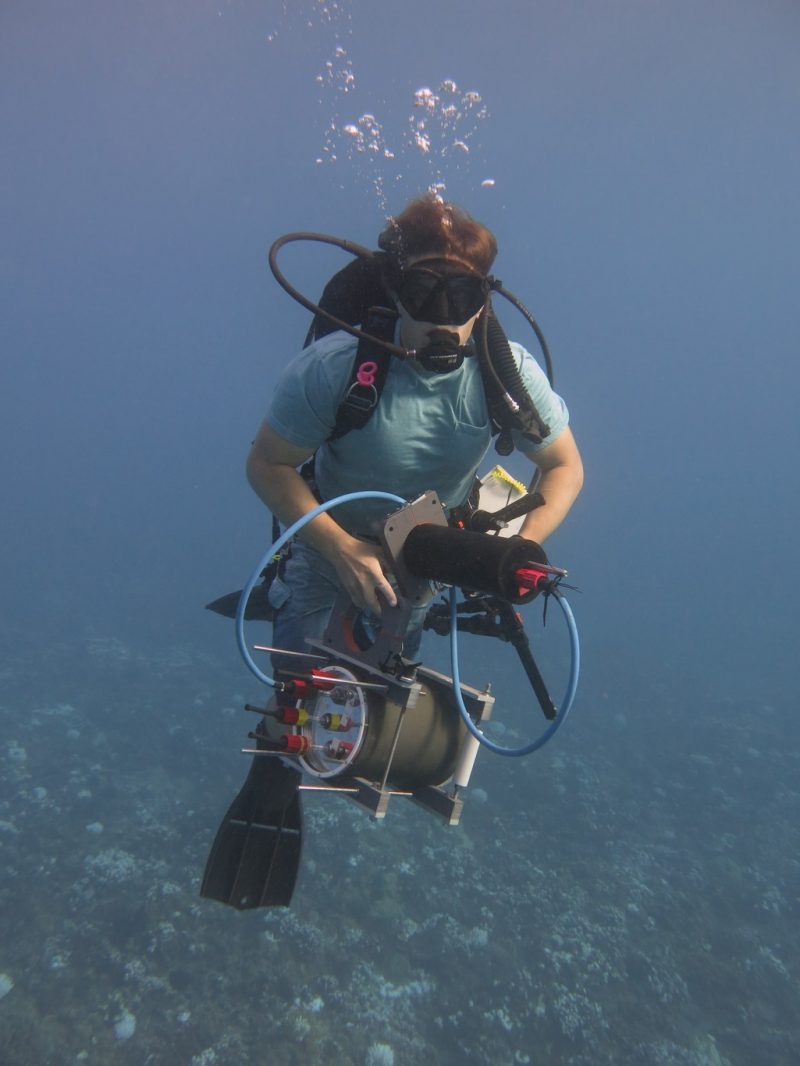 Have BUM, will travel. Image via Emily L. A. Kelly/UCSD

With the new ability to see and record these processes happening in real-time in the ocean, researchers could make some interesting new discoveries. As such, we have made our systems available to the scientific community – we plan to aid researchers by traveling to their work sites and taking photos and videos.

And we’re always thinking about further improvements – developing a next generation of underwater instruments that have higher frame rates and even better resolution. In addition, there is one enchanting frontier to think about: underwater microscopic virtual reality – an immersive new way for scientists and everyone else to explore the wonders of the oceans.