The largest wildfire ever recorded in New Mexico state history continues to burn as dry and windy conditions create more issues for firefighters.

The largest wildfire to ever burn in New Mexico history is still burning uncontrollably across the Gila Wilderness. As of today, (June 5) at least 1,200 personnel are fighting the wildfire that is roughly 20% contained. The wildfires are located in southwest New Mexico and are affecting areas 15 miles east of Glenwood, New Mexico. Dry weather and strong winds are to blame for the increase in wildfires not only in New Mexico, but for parts of the southwestern United States. It appears that lightning is what sparked the fires in southwestern New Mexico. As of now, breezy conditions will continue through the week which will create problems for controlling the burning wildfire across southwestern New Mexico.

Smoke from the wildfire in Gila National Forest on May 23, 2012. Image Credit: Jacqueline McNeese

A lightning strike started the Whitewater-Baldy blaze in New Mexico and has charred more than 241,000 acres, or nearly 380 square miles, in Gila National Forest and has become not only the largest current wildfire burning in the United States, but the largest wildfire to have burned in New Mexico state history. The rugged terrain is making it tough for firefighters to put out the flames as there are some areas that simply hard to get to. As of now, the wildfire has destroyed a dozen cabins and eight outbuildings. The wild fire in the Gila Wilderness is so large it is larger than one and half times bigger than Chicago according to CNN News.

Governor Susana Martinez said that the wildfire burning acres is “Going to keep going up. Be prepared for that.” 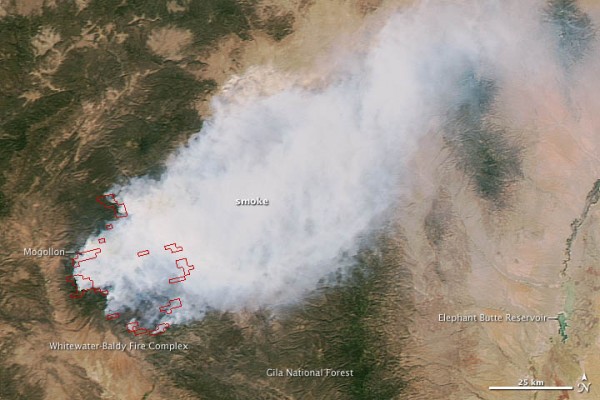 Image of the wildfire in southwestern New Mexico taken by the MODIS sensor on NASA’s Aqua satellite around 4:00 p.m. local time (20:00 Universal Time) on May 29, 2012.

As of now, firefighters are working on containing the wildfire to prevent it from spreading. Many neighborhoods had to be evacuated as precautions and fear that the wildfire could spread further south due to strong northerly winds. In fact, one of the evacuation areas in Mogollon, New Mexico will be able to return to their homes on Wednesday, June 6, 2012 as firefighters have been able to contain the fire to allow families back into their homes. The small city of Mogollon was evacuated on May 26, 2012 as strong winds and dry conditions were fueling the Whitewater-Baldy Complex fire.

“During these conditions, people with heart or lung disease, older adults, and children should avoid prolonged or heavy physical activity outdoors. Everyone else should minimize prolonged or physical activity outdoors. Low lying areas close to ongoing fire activity may experience periods with visibility of 1.5 – 2.5 miles, which is indicative of air that is unhealthy for all groups. If heavy smoke is present, then outdoor activities should be minimized where possible and caution observed when driving in reduced visibility. Take this into consideration when deciding whether or not to participate in outdoor activities, recognizing that conditions can change quickly and these projections are based on anticipated weather conditions and fire activity.”

Many areas across the southwestern United States are experiencing moderate to extreme drought. In fact, over 70% of New Mexico are experiencing severe drought throughout the state. Since we are in a transition/normal ENSO conditions, meaning we are no longer experiencing a La Niña or El Niño, it is rather uncertain as to whether or not this area will remain dry and continue to see an increase of wildfires in the region. Typically, by July, southwesterly flow brings more precipitation to the region and is considered the “monsoon” season. Many residents are hoping conditions will improve so firefighters can extinguish the flames and help the drought conditions experienced across the region. 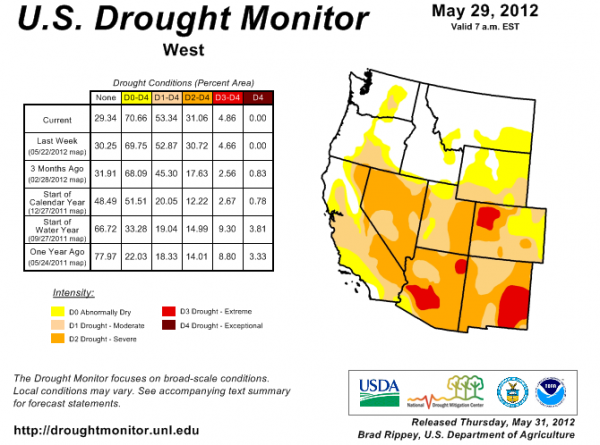 Moderate to extreme drought can be found throughout the southwestern portions of the United States. Image Credit: U.S. Drought Monitor

Bottom line: A lightning strike started the Whitewater-Baldy blaze in New Mexico and has charred more than 241,000 acres, or nearly 380 square miles, in Gila National Forest and has become not only the largest current wildfire burning in the United States, but the largest wildfire to have burned in New Mexico state history. Low humidity and windy northerly winds will create problems this week as it will only influence the wildfire to continue to grow in size. Many residents are urged to stay inside to avoid outdoor activities as the air quality is poor. Less than 20% of the wildfire is contained in the Gila Wilderness, and fire fighters are simply trying to prevent the fire from spreading to neighborhoods. Wildfires are also responsible for burning over 200 acres near Fort Collins, Colorado. As of now, at least 15 major wildfires continue to burn across the southwestern United States.