As of December 24, 2013, fresh lava was still pouring from a submarine volcano, building the new island. 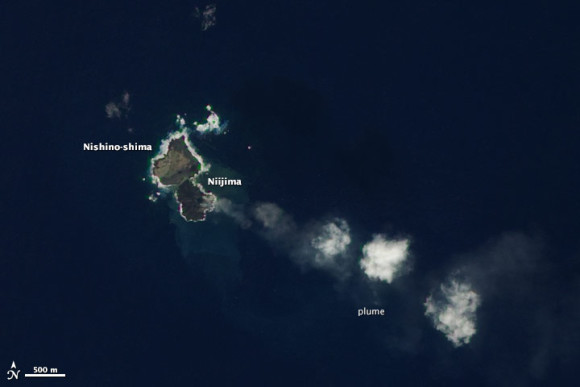 Nishino-shima, the summit of a massive submarine volcano that last erupted and expanded in 1973–74. Niijima is the new island, adjacent to the volcano. It may soon merge with it. NASA’s Earth Observing-1 (EO-1) satellite captured this natural-color image of the two islands on December 24, 2013.

NASA Earth Observatory reported this week on another new island, born by volcanic activity. The new island – “Niijima” in Japanese – is located in Japanese waters, along the western edge of the Pacific Ring of Fire. It’s about 600 miles (1,000 kilometers) south of Tokyo and it rose from the sea during a volcanic eruption first reported on November 20, 2013.

The new island is adjacent to Nishino-shima, the summit of a massive submarine volcano that last erupted and expanded in 1973–74. Ongoing eruptions have caused the new island to grow, and the two islands may soon fuse into one, NASA says.

On December 24, 2013, when the image above was acquired by satellite, only a narrow channel of water appeared to separate the two islands. NASA Earth Observatory reported:

The water around the islands was discolored by volcanic minerals and gases, as well as by seafloor sediment stirred up by the ongoing eruption. A faint plume, likely steam and other volcanic gases associated with the eruption, extended away from the new island to the southeast.

Infrared imagery from the same satellite showed intense heat from the fresh lava, which was continuing to come to the surface and build the island as of December 24, 2013.

Bottom line: A new Japanese island – “Niijima” – was born via volcanic activity along the Pacific Ring of Fire, 1,000 kilometers south of Tokyo, in late November 2013. As of December 24, fresh lava was still building the island.