A new illustration of the seafloor, created by two of the world’s leading ocean floor mapping experts, details underwater terrain where the missing Malaysia Airlines flight might be located. 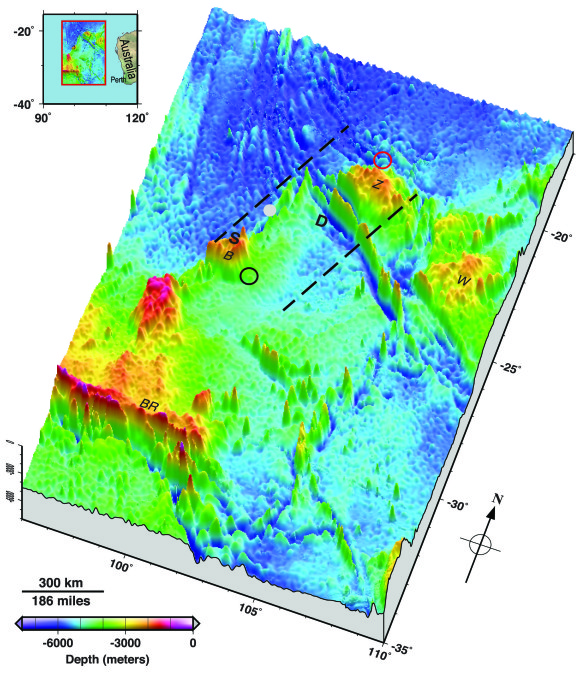 Seafloor topography in the Malaysia Airlines flight MH370 search area. Dashed lines approximate the search zone for sonar pings emitted by the flight data recorder and cockpit voice recorder popularly called black boxes. The first sonar contact (black circle) was reportedly made by a Chinese vessel on the east flank of Batavia Plateau (B), where the shallowest point in the area (S) is at an estimated depth of 1637 meters. The next reported sonar contact (red circle) was made by an Australian vessel on the north flank of Zenith Plateau (Z). The inset in the top left shows the area’s location to the west of Australia. Image credit: Walter H.F. Smith and Karen M. Marks

Seafloor experts have created a new topography map that could shed additional light on what type of underwater vehicles might be used to find the missing airplane and where any debris from the crash might lie.

The seafloor topography map illustrates jagged plateaus, ridges and other underwater features of a large area underneath the Indian Ocean where search efforts have focused since contact with Malaysia Airlines flight MH370 was lost on March 8. The image was published today in Eos, the weekly newspaper of the Earth and space sciences, published by the American Geophysical Union.

The new illustration of a 2,000 kilometer by 1,400 kilometer (1,243 miles by 870 miles) area where the plane might be shows locations on the seafloor corresponding to where acoustic signals from the airplane’s black boxes were reportedly detected at the surface by two vessels in the area. It also shows the two plateaus near where these “pings” were heard.

It points out the deepest point in the area: 7,883 meters (about five miles) underneath the sea in the Wallaby-Zenith Fracture Zone – about as deep as 20 Empire State buildings stacked top to bottom. Undersea mountains and plateaus rise nearly 5,000 meters (about three miles) above the deep seafloor, according to the map.

The illustration, designated as Figure 1 of the Eos article, was created by Walter H.F. Smith and Karen M. Marks, both of the National Oceanic and Atmospheric Administration’s Laboratory for Satellite Altimetry in College Park, Maryland, and the former and current chairs, respectively, of the Technical Sub-Committee on Ocean Mapping of the General Bathymetric Chart of the Oceans, or GEBCO. GEBCO is an international organization that aims to provide the most authoritative publicly available maps of the depths and shapes of the terrain underneath the world’s oceans.

Satellite altimetry has made it possible to depict the topography of vast regions of the seafloor that would otherwise have remained unmapped, Smith said. To illustrate the topography of the search area, Smith and Marks used publicly available data from GEBCO and other bathymetric models and data banks, along with information culled from news reports.

Smith said the terrain and depths shown in the map could help searchers choose the appropriate underwater robotic vehicles they might use to look for the missing plane. Knowing the roughness and shape of the ocean floor could also help inform models predicting where floating debris from the airplane might turn up.

Smith cautions that the new illustration is not a roadmap to find the missing airplane. Nor does the map define the official search area for the aircraft, he added.

“It is not ‘x marks the spot’,” Smith said of their map. “We are painting with a very, very broad brush.”

Search efforts for the missing airplane have focused on an area of the southern Indian Ocean west of Australia where officials suspect that the plane crashed after it veered off course. After an initial air and underwater search failed to find any trace of the airplane, authorities announced this month that they will expand the search area and also map the seabed in the area.

Smith pointed out that the search for the missing plane is made more difficult because so little is understood about the seafloor in this part of the Indian Ocean. In the southeast Indian Ocean, only 5 percent of the ocean bottom has been measured by ships with echo soundings. Knowledge of the rest of the area comes from satellite altimetry, which provides relatively low-resolution mapping compared to ship-borne methods.

“It is a very complex part of the world that is very poorly known,” Smith said.

A lack of good data about Earth’s seafloors not only hinders search efforts, it also makes it harder for scientists to accurately model the world’s environment and climate, Smith noted. Today, our knowledge of our planet’s undersea topography is “vastly poorer than our knowledge of the topographies of Earth’s Moon, Mars and Venus,” Smith and Marks write in Eos. This is because these other planetary bodies have no oceans, making their surfaces relatively easy to sense from space.

Smith said he hoped that “the data collected during the search for MH370 will be contributed to public data banks and will be a start of greater efforts to map Earth’s ocean floor.”