New glass inspired by a seashell

Engineers at McGill have invented a new biomimetic technique that can make glass more shatter resistant.

Engineers at McGill have invented a new biomimetic technique that can make glass more shatter resistant. The design of the new glass was inspired by the micro-architecture of seashells, and they published their research in the journal Nature Communications on January 28, 2014.

Glass is truly a remarkable material—it’s transparent, durable, and it can be molded into a variety of shapes such as those found in windows, cups, bowls, and vases. Glass, however, will shatter when subjected to enough force, and this has long been a downside of its use in consumer and commercial products.

Engineers in the Department of Mechanical Engineering at McGill have been busy studying strong natural materials such as teeth and seashells in an attempt to improve the toughness of glass. Their work is based on biomimicry or the science of imitating nature.

Several species of mollusks have shells that are lined with an inner, iridescent layer of nacre, which is also known as mother-of-pearl. The nacre layer consists of many hard plates of calcium carbonate that are cushioned by an organic matrix of proteins. While the organic matrix is weaker than the hard chalk-like plates, the organic matrix actually adds to the strength of shells through its ability to trap and prevent any cracks that form from spreading. This makes the shells much less brittle. 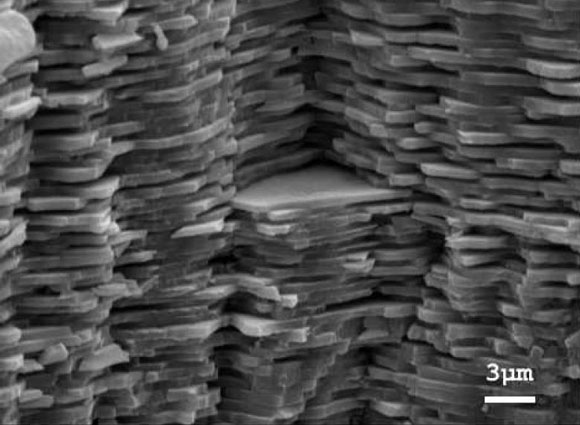 The engineers at McGill mimicked the crack-trapping properties of nacre by using a laser to engrave a wavy network of micro-cracks into small rectangles of glass. The micro-cracks were able to stop cracks from propagating through the glass. They then filled the cracks with polyurethane and found that the pieces of engraved glass were about 200 times stronger than non-engraved glass.

François Barthelat, associate professor in McGill’s Department of Mechanical Engineering and leader of the project team, commented on the findings in a press release. He said:

What we know now is that we can toughen glass, or other materials, by using patterns of micro-cracks to guide larger cracks, and in the process absorb the energy from an impact. We chose to work with glass because we wanted to work with the archetypal brittle material. But we plan to go on to work with ceramics and polymers in future. Observing the natural world can clearly lead to improved man-made designs.

The research was funded by the Natural Sciences and Engineering Research Council of Canada, the Canada Foundation for Innovation, and McGill University. Co-authors of the paper included M. Mirkhalaf and A. Khayer Dastjerdi.

Bottom line: Engineers at McGill have invented a new biomimetic technique based on the structure of seashells that can make glass more shatter resistant. The research was published in the journal Nature Communications on January 28, 2014.