Fossils of 2 new creatures from dawn of animal life

Researchers found the 2 fossils in a South Australian fossil bed dubbed “Alice’s Restaurant Bed,” a tribute to the Arlo Guthrie song lyric “You can get anything you want at Alice’s Restaurant.”

Researchers have discovered fossils of two previously unknown creatures – among Earth’s earliest animals – that lived in the shallow sea between 580-540 million years ago. The discoveries, named Attenborites janeae and Obamus coronatus were reported in the Australian Journal of Earth Sciences on May 23, 2018, and on June 14, 2018.

The animals were glimpsed in a particularly well-preserved fossil bed in Nilpena Station, west of the Flinders Ranges in South Australia that the researchers dubbed “Alice’s Restaurant Bed,” a tribute to the Arlo Guthrie song lyric “You can get anything you want at Alice’s Restaurant.” Study leader Mary Droser is a professor of paleontology in University of California Riverside’s Department of Earth Sciences. Droser said in a statement:

I’ve been working in this region for 30 years, and I’ve never seen such a beautifully preserved bed with so many high quality and rare specimens, including Obamus and Attenborites.

Earth’s first complex animals lived in the shallow oceans between 580 and 540 million years ago. They included the Dickinsonia – large flat animals with a quilt-like appearance – tube-shaped organisms, frond-like creatures that looked more like plants, and several dozen other varieties already characterized by scientists.

Add to that list these two new animals, described in a University of California Riverside statement as:

Obamus coronatus, a name that honors President Barack Obama’s passion for science: This disc-shaped creature was between 0.5-2 cm across with raised spiral grooves on its surface. Obamus coronatus did not seem to move around, rather it was embedded to the ocean mat, a thick layer of organic matter that covered the early ocean floor.

Attenborites janeae, named after the English naturalist and broadcaster Sir David Attenborough for his science advocacy and support of paleontology. This tiny ovoid, less than a centimeter across, was adorned with internal grooves and ridges giving it a raisin-like appearance. 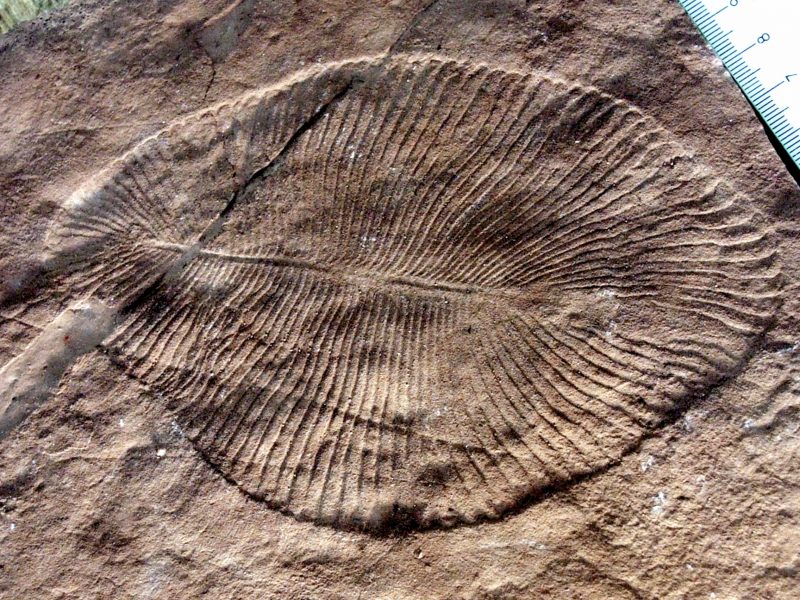 The two fossils are part of the Ediacara Biota, soft-bodied animals visible as fossils cast in fine-grained sandstone that have been preserved for hundreds of millions of years. These Precambrian lifeforms represent the dawn of animal life.

In the hierarchical taxonomic classification system, the Ediacara Biota are not yet organized into families, and little is known about how they relate to modern animals. About 50 genera have been described, Droser said, which often have only one species.

The two genera that we identified are a new body plan, unlike anything else that has been described. We have been seeing evidence for these animals for quite a long time, but it took us a while to verify that they are animals within their own rights and not part of another animal.