Scientists have discovered a new fault in the earthquake-prone region of Southern California that includes the greater Los Angeles area.

At the same time, scientists published their recent discovery of a potentially significant fault that lies along the eastern edge of the Salton Sea, to the west of the San Andreas fault, in the earthquake-prone region that includes the greater Los Angeles area. The new fault, dubbed the Salton Trough Fault, is not one of those that moved during the swarm. 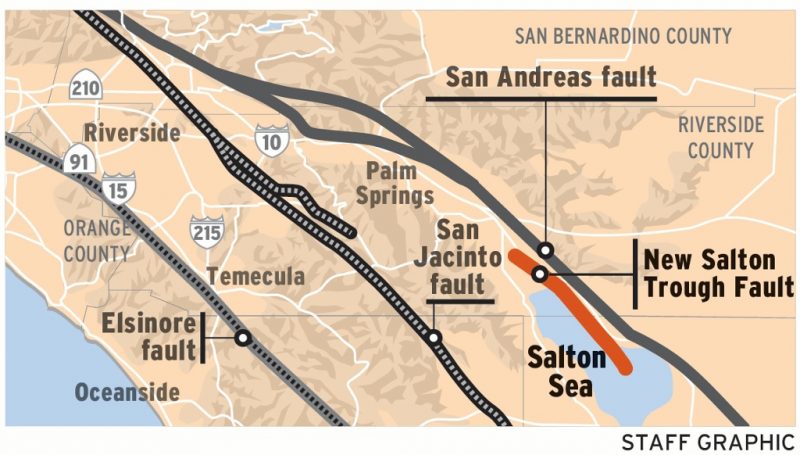 Image via The Press Enterprise

Scripps geologist Neal Driscoll is the lead principal investigator of the project and coauthor of the study. He said in a statement:

The location of the fault in the eastern Salton Sea has made imaging it difficult and there is no associated small seismic events, which is why the fault was not detected earlier.

According to recent studies, the region has experienced a magnitude-7 earthquake roughly every 175 to 200 years for the last thousand years. A major rupture on the southern portion of the San Andreas Fault hasn’t happened in the last 300 years.

Nevada State Seismologist Graham Kent is a coauthor of the study. Kent said:

The extended nature of time since the most recent earthquake on the Southern San Andreas has been puzzling to the earth sciences community. Based on the deformation patterns, this new fault has accommodated some of the strain from the larger San Andreas system, so without having a record of past earthquakes from this new fault, it’s really difficult to determine whether this fault interacts with the southern San Andreas Fault at depth or in time.

The new findings help provide insight on the intricate structure of earthquake faults beneath the Salton Sea and what role it may play in the earthquake cycle along the southern end of the San Andreas Fault. The scientists say that further research will help provide information into how the newly identified fault interacts with the southern San Andreas Fault, which may offer new insights into the more than 300-year period since the most recent earthquake.

The study appears in the October 2016 issue of the journal Bulletin of the Seismological Society of America.

Bottom line: Scientists have discovered a new fault along the edge Southern California’s Sslton Sea, in in the earthquake-prone region that includes the greater Los Angeles area.