Hadrosaur was a truly polar dinosaur that endured months of winter darkness and probably experienced snow. 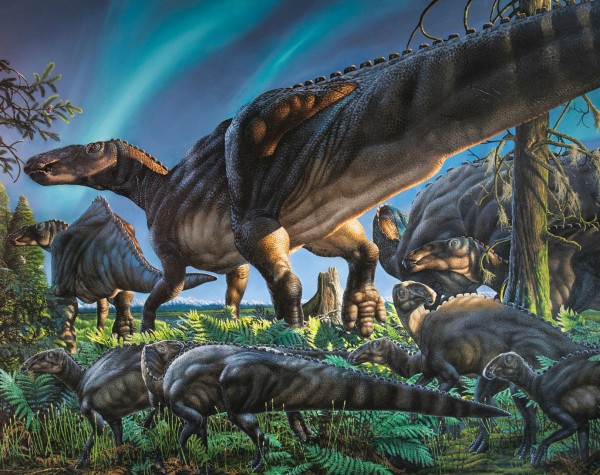 This original painting by James Havens of Ugrunaaluk kuukpikensis, the new species of duck-billed dinosaur, illustrates a scene from ancient Alaska during the Cretaceous Period.

Researchers have uncovered the skeletal remains of a new species of plant-eating dinosaur in a remote part of Alaska, according to a report published September 22 in the journal Acta Palaeontologica Polonica. These dinosaurs were the northernmost dinosaurs known to have ever lived.

The research team, scientists from Florida State University (FSU) and University of Alaska Fairbanks, say that the remains belong to a species of hadrosaur, a type of duck-billed dinosaur that roamed the North Slope of Alaska in herds 69 million years ago, living in darkness for months at a time and probably experiencing snow.

The finding of dinosaurs this far north challenges everything we thought about a dinosaur’s physiology. It creates this natural question: How did they survive up here?

The dinosaur was named Ugrunaaluk kuukpikensis (oo-GREW-na-luck kuukpikensis (KOOK-pik-en-sis), which means ‘ancient grazer of the Colville River’. The remains were found along the Colville River in a geological formation in northern Alaska known as the Prince Creek Formation. The name was a collaborative effort between scientists and the native Iñupiaq people who live there today.

The researchers say Ugrunaaluk kuukpikensis grew up to 30 feet (9 meters) long and was a superb chewer, with hundreds of individual teeth well-suited for eating coarse vegetation.

These were the northern-most dinosaurs to have lived during the Age of Dinosaurs. They were truly polar. 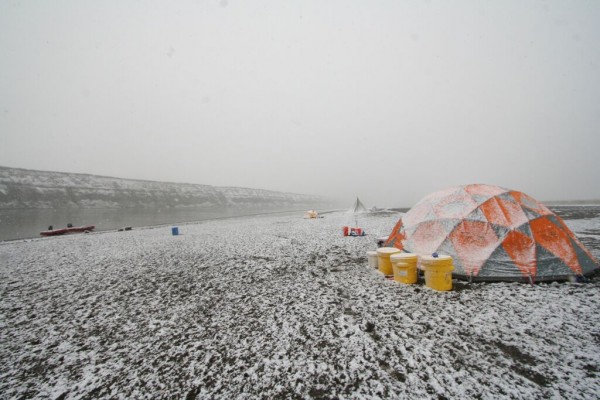 The researchers’ camp at the dig site along the Colville River near Nuiqsut, Alaska. Photo credit: Greg Erickson/UA Museum of the North via AP

The researchers say that 69 million years ago, when these hadrosaurs lived, the climate was much warmer. What is now northern Alaska was covered in a polar forest. But since it was so far north, the dinosaurs had to contend with months of winter darkness and snow.

It appears that a herd of young animals was killed suddenly, wiping out mostly one similar-aged population to create this deposit.

Read more from the University of Alaska Fairbanks