“When we looked up at the bottom of the ice shelf, there they were … People were literally jumping up and down with excitement.” — Frank Rack

Scientists were amazed to find a new species of anemone hanging from the underside of the Ross Ice Shelf off Antarctica, during an expedition to study ocean currents. They described the scene as many thousands of small sea anemones, burrowed into the ice, hanging down with outstretched tentacles like “flowers on a ceiling.” Their findings were published in December 2013 in the journal PLOS ONE.

A robotic explorer deployed to study ocean currents under the Ross Ice Shelf unexpectedly discovered the ice anemones in December 2010. It was part of the Antarctic Geological Drilling (ANDRILL) program, a multinational research project that’s partly funded by the National Science Foundation, to drill deep into rock at sites along the Antarctica continental edge in order to study its geological history back to 66 million years ago.

They were not expecting to discover a species new to science. 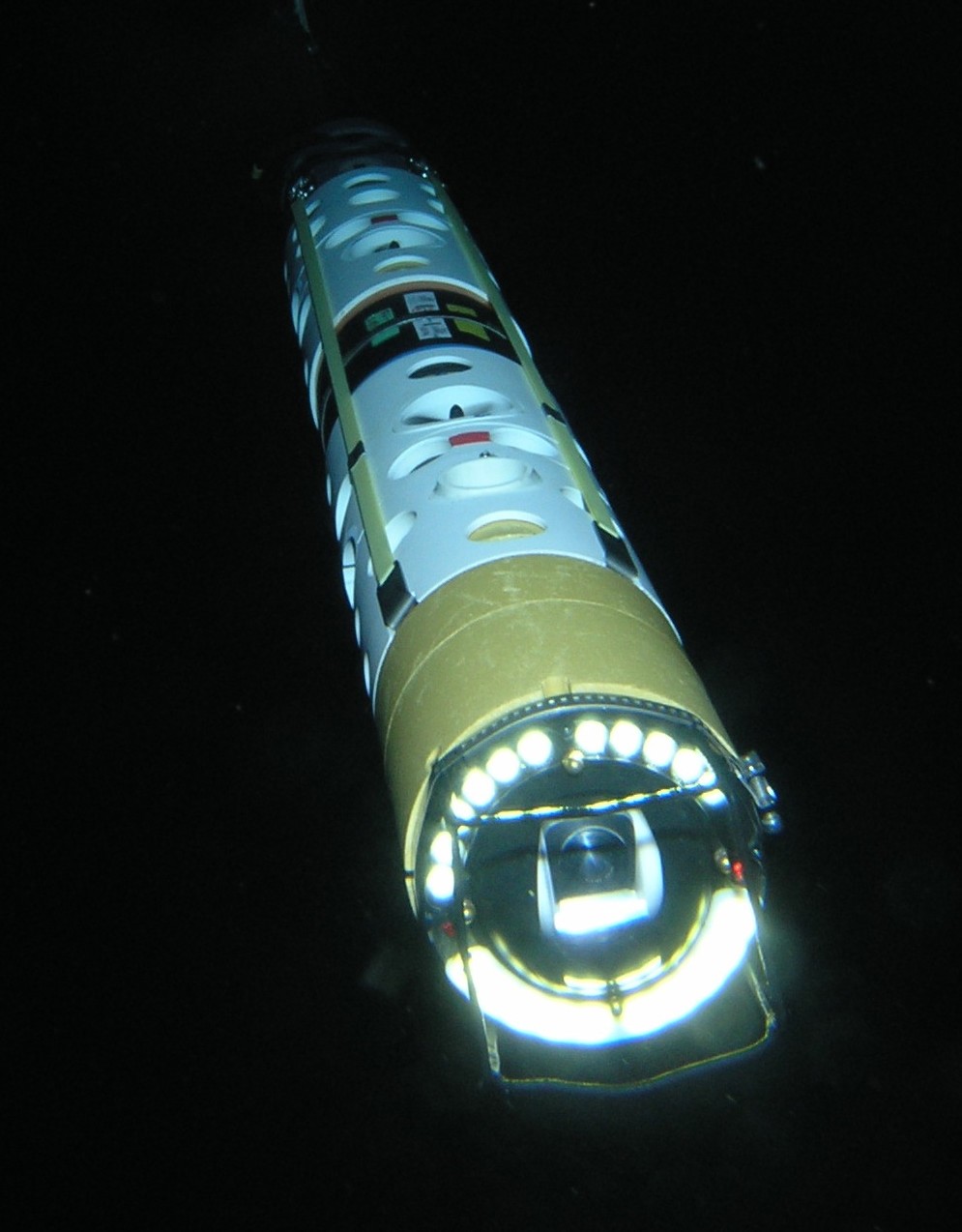 The 4 1/2-foot cylindrical robot, equipped with two cameras, was lowered down a hole drilled through about 880 feet (270 meters) of ice. Scientists deployed this robot into waters below the ice to study water currents. The discovery of the ice anemones, they said, was “total serendipity.” Image via Dr. Stacy Kim, National Science Foundation

Marymegan Daly, a specialist in sea anemones at Ohio State University, examined specimens of the tiny anemones, named Edwardsiella andrillae, in honor of the ANDRILL program. She said, in a press release:

The pictures blew my mind, it was really an amazing find.

The anemones live by burrowing most of its column into the ice shelf, with just its tentacle crown extended into the ocean water. Daly describes the anemones as having an inner ring of eight long tentacles, with 20 to 24 shorter tentacles surrounding it. When the anemone shrinks, it measures less than an inch, but it can extend three to four inches in its relaxed state. She speculates they feed on plankton, but that’s not known for certain. 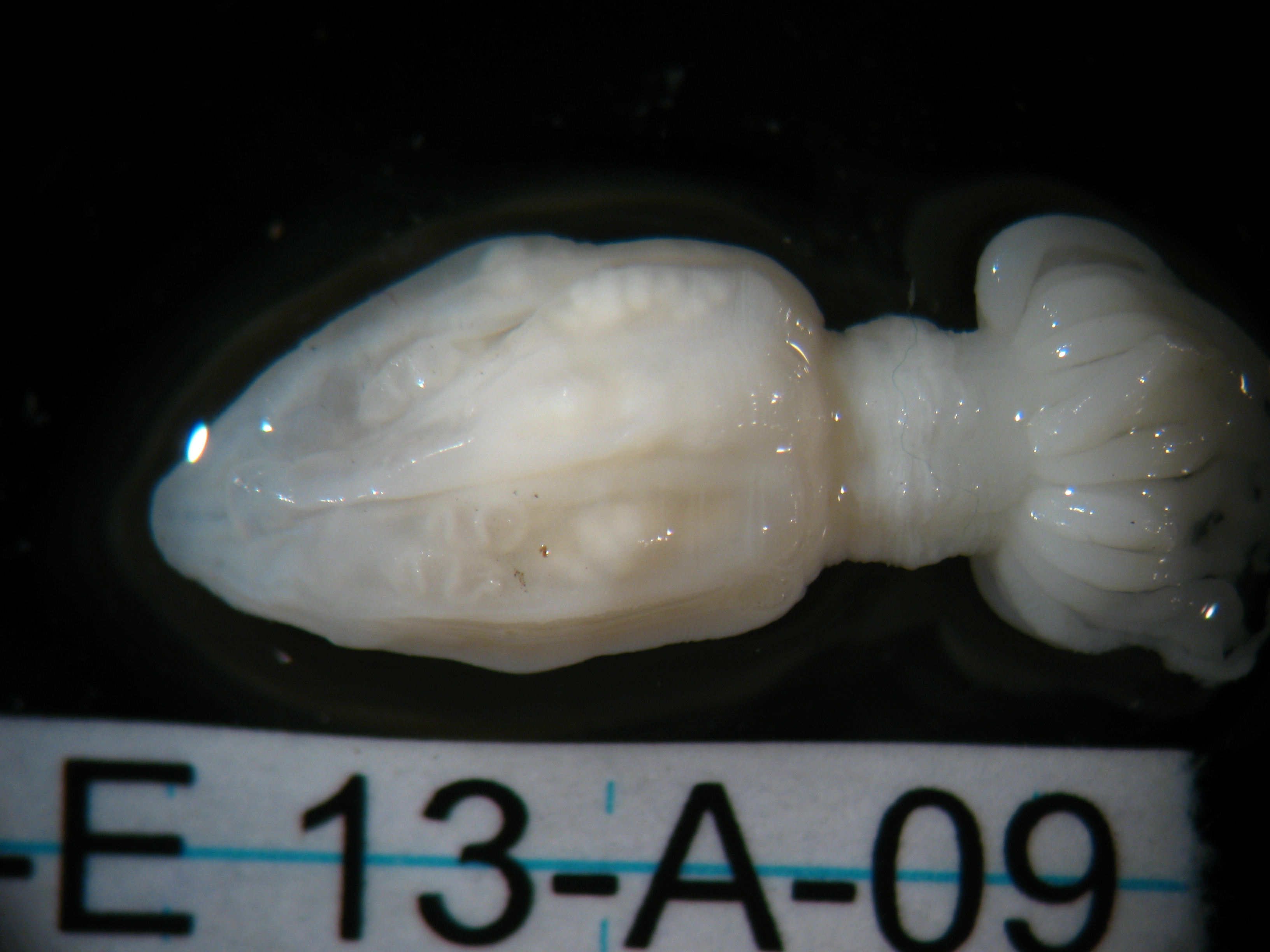 Even though the robot was not equipped for biological study, the science and engineering team was able to retrieve several anemone specimens for further study and preservation by stunning the creatures with hot water, then using an improvised suction mechanism to extract them from their icy burrows. Image via Dr. Frank R. Rack, ANDRILL Science Management Office. 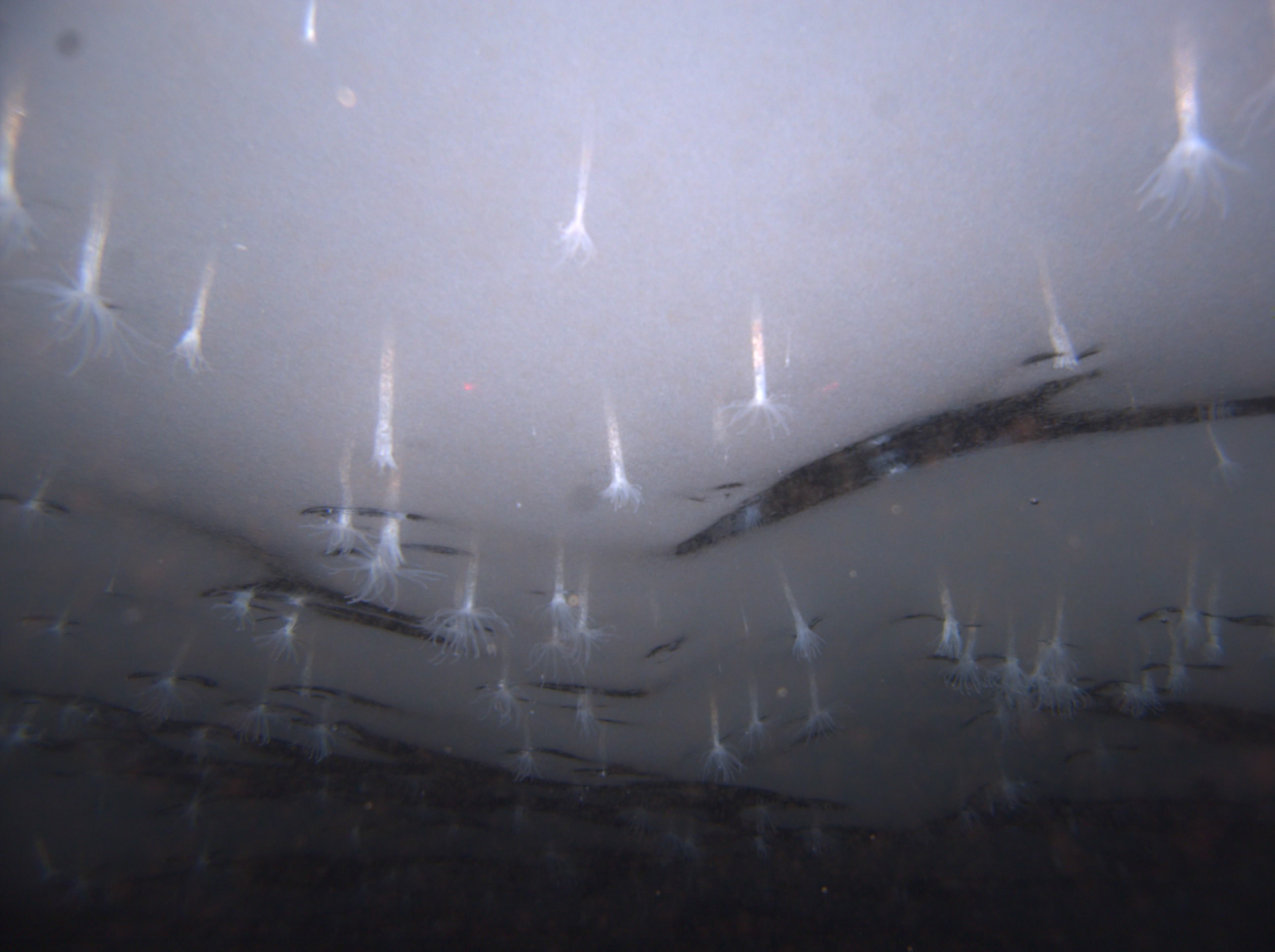 Frank Rack, executive director of the ANDRILL Science Management Office at University of Nebraska-Lincoln, had left the exploration site shortly before the discovery. He learned about it while listening to radio-relayed reports from the robot deployment team, shouting with excitement upon seeing the first images of the anemones. In another press release, Rack said:

People were literally jumping up and down with excitement. They had found a whole new ecosystem that no one had ever seen before.

What started out as an engineering test of the remotely operated vehicle during its first deployment through a thick ice shelf turned into a significant and exciting biological discovery.

The robotic cameras also revealed fish swimming upside-down, as if the bottom of the ice shelf was the ocean floor. Polychaete worms and amphipods were seen in the anemones’ environment. Also present was an odd unknown cylindrical creature the team nicknamed “the eggroll,” about four inches long and one inch in diameter, that swam using appendages on both ends of its body as it wandered around the anemones, sometimes clinging to them. 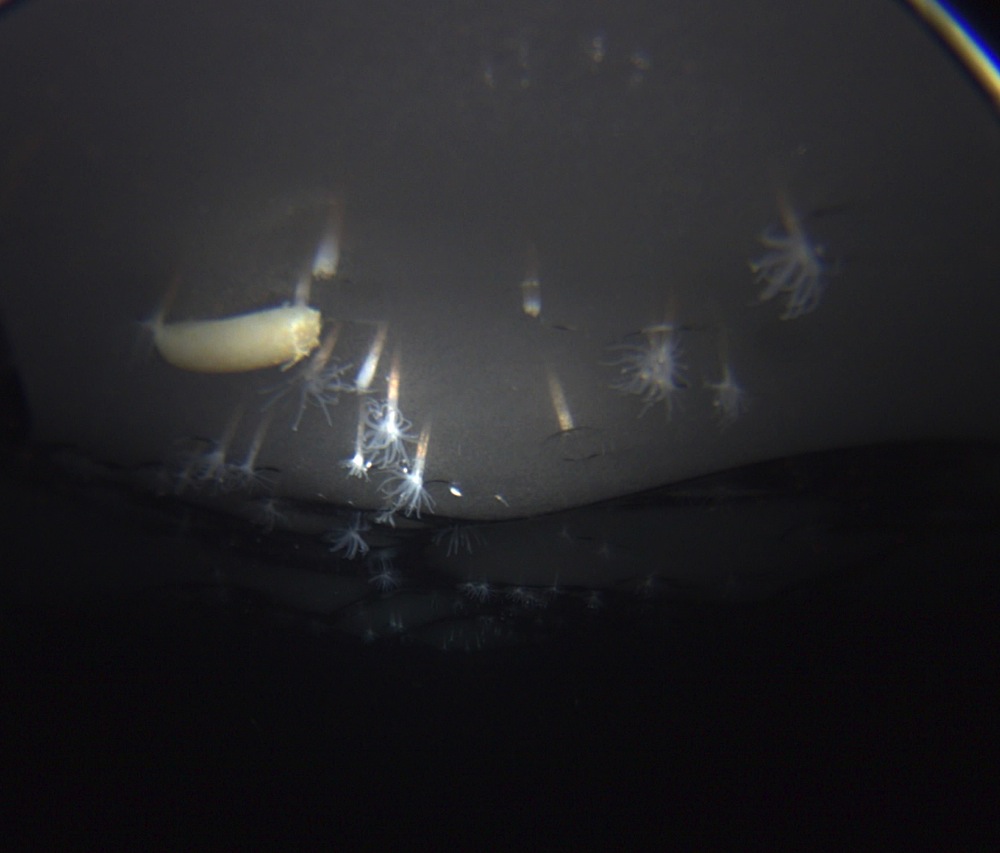 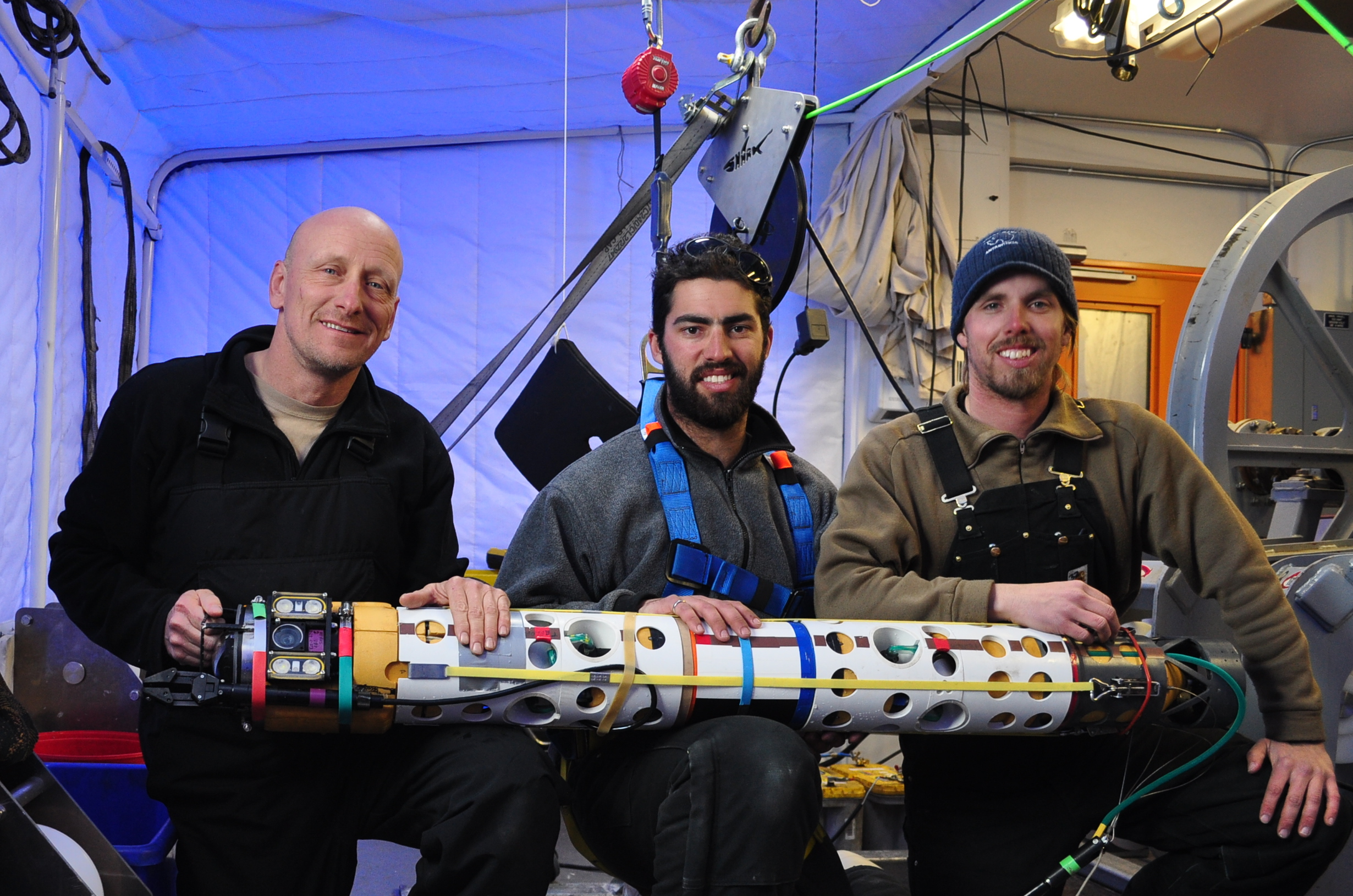 Much remains unknown about the Edwardsiella andrillae. How do they attach themselves to the ice? How do they stay alive inside the ice? Researchers are planning a new robotic mission to explore this alien-like ecosystem, with partial funding from NASA since these conditions could help scientists design a future mission to search for life on Europa, an ice-covered moon orbiting Jupiter.

Bottom line: A December 2013 paper in the journal PLOS ONE reported the discovery of a unique new species of anemone under the Ross Ice Shelf off Antarctica. Scientists were astonished to find large colonies of tiny sea anemones attached to the underside of the ice field, hanging down with outstretched tentacles like “flowers on a ceiling.”