With an announcement released via Accuweather earlier today (December 5, 2012), NOAA and NOAA’s National Hurricane Center say they are changing the definition of “hurricane warning” to include some of the other serious hazards associated with hurricanes, for example, flooding and storm surge. In past posts related to Hurricane Sandy, I wrote about the huge issues regarding the decision of not issuing hurricane warnings along the U.S. Northeast coast prior to Sandy’s landfall. Why weren’t they issued? Because as Sandy approached landfall, its winds dropped below the strictly defined minimum for hurricane-force winds (74 miles per hour). Today’s announcement makes it clear that both NOAA at large and its National Hurricane Center (NHC) knew about the problems this lack of warning caused and are now attempting to rectify the situation prior to the 2013 hurricane season. 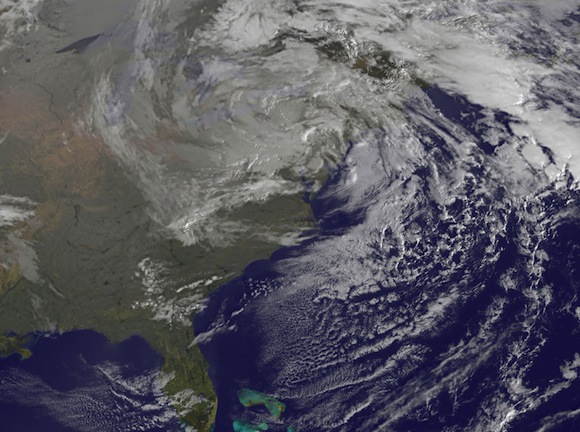 Sandy as it struck the U.S. mainland on October 29, 2012. Hurricane warnings were not issued. Why? Because, by definition, Sandy was no longer a hurricane. It had lost certain characteristics required to be named a hurricane or tropical storm.

Accuweather reported that the National Hurricane Center (NHC) has revised the definition of a “hurricane warning” to the following:

An announcement that sustained winds of 74 mph or higher are expected somewhere within the specified area in association with a tropical, sub-tropical, or post-tropical cyclone. Because hurricane preparedness activities become difficult once winds reach tropical storm force, the warning is issued 36 hours in advance of the anticipated onset of tropical-storm-force winds. The warning can remain in effect when dangerously high water or a combination of dangerously high water and waves continue, even though winds may be less than hurricane force.

Here’s the original definition of a hurricane warning by the NHC. It’s defined as an announcement that hurricane conditions (sustained winds of 74 mph or higher) are expected somewhere within the specified area. Because hurricane preparedness activities become difficult once winds reach tropical storm force, the hurricane warning is issued 36 hours in advance of the anticipated onset of tropical-storm-force winds.

As of now, NOAA/NHC has not released official information regarding these new changes for the 2013 hurricane season. But presumably they will do this soon.

In my opinion, this is a good change. It will bring about more good than bad in the attempt to warn people about potential hazards that may be threatening their homes.

Bottom line: Accuweather reported on Wednesday, December 5, 2012 that NOAA’s National Hurricane Center will revise the definition of “hurricane warning” to reflect other hazards that are associated with tropical systems, such as storm surge and flooding. It is an effort that is needed, and is designed for the general public to be ready for hurricane conditions, even when an approaching storm has winds that drop below the strict definition of a hurricane (winds of less than 74 miles per hour). More updates on the new definition and the process leading to it will be available as soon as we get them.