The average change in Earth’s radius is 0.004 inches per year, or about the thickness of a human hair, a rate considered statistically insignificant.

A NASA-led research team has confirmed that Earth isn’t expanding, shedding light on a centuries-old debate among scientists and providing firmer ground upon which today’s physics can be used to examine and understand earthly processes.

Xiaoping Wu of NASA’s Jet Propulsion Laboratory, Pasadena, California, led an international group of scientists that applied a new data calculation technique and subsequently determined that the average change in Earth’s radius is 0.004 inches (0.1 millimeters) per year, or about the thickness of a human hair, a rate considered statistically insignificant.

Since Charles Darwin’s time – say, around the mid-1800s – scientists have speculated that the solid Earth might be expanding or contracting. Now we know it is not. 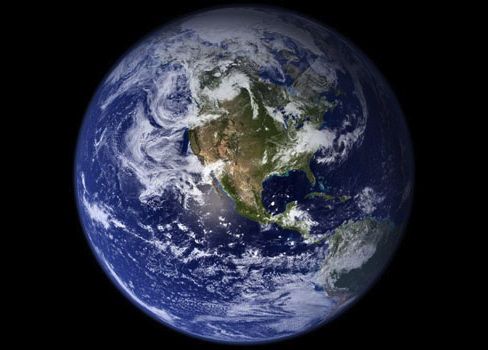 Why did it take so long to figure this out? Think of it this way, NASA says: if all of Earth’s GPS stations were located in Norway, their data would indicate that Earth is growing, because high-latitude countries like Norway are still rising in elevation in response to the removal of the weight of ice sheets from the last Ice Age, which ended some 10,000 years ago. It has taken until now for scientists to find a calculation technique – used in conjunction with a suite of measuring devices, like satellite laser ranging and very-long-baseline interferometry – that they feel relatively certain about.

That is why Xiaoping Wu’s team’s finding – published in Geophysical Research Letters – is noteworthy. It’s key to the International Terrestrial Reference Frame, which in turn is used for ground navigation, for tracking spacecraft in Earth orbit, to monitor aspects of global climate change (including sea level rise), to understand imbalances in ice mass at Earth’s poles, and to follow the continuing rebound of Earth’s surface following the retreat of the massive ice sheets that blanketed much of Earth during the last Ice Age.

According to NASA, scientists need a known frame of reference against which to evaluate Earth’s movements. Any significant change in Earth’s radius over time would alter scientists’ understanding of our planet’s physical processes.

So the radius of the good old Earth under our feet is about as reliably unchanging as … well, as you might have imagined before reading this post.

At last, I can sleep at night again.

Bottom line: Scientists have debated for centuries about whether the Earth under our feet might be expanding – or contracting – slightly. A suite of instruments has been employed in the International Terrestrial Reference Frame project, including satellite laser ranging. But physical measurements had to be combined with a new data calculation technique in order to determine that the average change in Earth’s radius is 0.004 inches (0.1 millimeters) per year. That’s about the thickness of a human hair, a rate considered statistically insignificant. Xiaoping Wu of NASA’s Jet Propulsion Laboratory, Pasadena, Calif., led an international group of scientists who made this determination.

Read more from NASA: Research Confirms It’s a Small World After All