Densovirus is the likely culprit behind sea-star wasting disease, which has killed millions of sea stars along North America’s west coast.

Scientists think that they have finally figured out what has been causing the deaths of millions of sea stars along the west coast of North America. The disease outbreak, which is known as sea-star wasting disease, started during the summer of 2013, and it has now decimated sea star populations all the way from Baja California in Mexico up to the southern coast of Alaska. The disease is most likely caused by a virus, the scientists say after they painstakingly gathered multiple lines of evidence from both laboratory and field studies. Their new findings were published in Proceedings of the National Academy of Sciences on November 17, 2014.

To test their hypothesis that sea-star wasting disease is caused by a virus, scientists took tissue samples from sick sea stars, ground them up, and passed them through a filter that would trap bacteria but allow viruses to pass through. Next, they used heat to kill off any viruses in some samples while allowing other samples to retain their viral loads. These samples were then injected into healthy sea stars. After about 10 to 17 days, sea stars that had received the non-heat treated samples started showing signs of the disease. In contrast, those that had received the heat treated samples remained disease free.

Samples of viruses collected from the sea stars during the course of the experiment showed that a particular type of virus, known as a densovirus, had increased in number as the disease progressed. Field studies also confirmed that high densovirus loads were more likely to be found in sick sea stars than in healthy sea stars. All of these findings strongly suggest that the sea-star wasting disease is caused by the densovirus.

Ian Hewson, lead author of the study, is a microbiology professor at Cornell University. He commented on the new findings in a press release:

There are 10 million viruses in a drop of seawater, so discovering the virus associated with a marine disease can be like looking for a needle in a haystack. Not only is this an important discovery of a virus involved in a mass mortality of marine invertebrates, but this is also the first virus described in a sea star.

Interestingly, the scientists examined some museum specimens of sea stars and detected the presence of the densovirus in animals that were collected as far back as the year 1942. So the big question now is why haven’t similar outbreaks occurred before today? 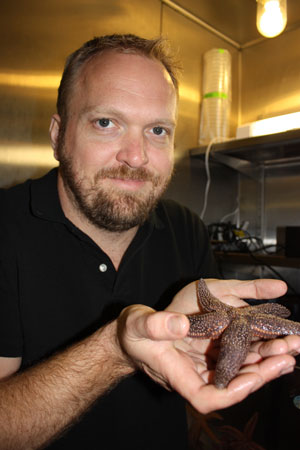 It’s possible that the virus has undergone some genetic changes that have made it more infectious, the scientists say. Additionally, it is possible that changes in the environment have made sea stars more susceptible to densovirus infections. Clearly, more research will be needed to fully understand this particular disease.

Sea stars are a keystone species, which means that they have an outsized influence on other organisms in the marine ecosystem. The loss of keystone species is often associated with dramatic decreases in biodiversity. For example, sea stars prey on mussels, and when sea stars are absent in coastal habitats, mussel populations can explode and crowd out other species. Long-term monitoring of coastal sites hit hard by sea-star wasting disease will be important to determine if there will be any cascading negative effects on the ecosystem.

The new research was a collaborative effort of 25 scientists from the United States and Canada. It was funded by Cornell University’s David R. Atkinson Center for a Sustainable Future, the National Science Foundation, and Washington Sea Grant.

Bottom line: Scientists say that a densovirus is the likely culprit behind sea-star wasting disease. The disease has killed millions of sea stars along the west coast of North America since 2013. The findings were published in Proceedings of the National Academy of Sciences on November 17, 2014.