Much of U.S. will see active and stormy weather April 9-11

Significant storm system sweeping across U.S. will bring winter back to Northern Plains and Rocky Mountains. and severe weather in Central Plains and U.S. Southeast.

A very strong cold front will be pushing eastward across the United States this week and will bring severe weather starting in the Central Plains and pushing eastward into the Southeast and Ohio River Valley. Behind this cold front, temperatures are significantly colder with many areas experiencing strong winds and snowy conditions. Tornadoes and straight line winds appear to be the main threat across the U.S. Tuesday, Wednesday and into Thursday of this week. It is important that everyone in the Central Plains and east of the Mississippi River to monitor their local weather for changing conditions as this system pushes eastward. It will be stormy pattern for April 9 through April 11, 2013.

Infrared image of the developing storm in the western United States on April 9, 2013. This storm will move eastward in the coming days. Image via College of Dupage 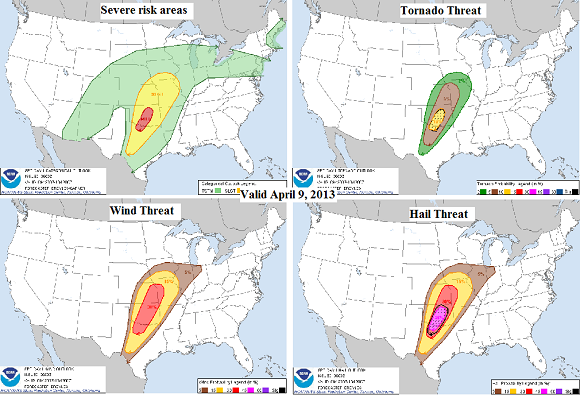 The Storm Prediction Center has issued a moderate risk for severe thunderstorms across portions of northern Texas and south/central Oklahoma for Tuesday, April 9, 2013. Cities involved in this moderate risk includes Wichita Falls, Norman, and Oklahoma City. Discrete storms appear to be favorable in these particular areas, meaning they might have to deal with supercells capable of producing strong tornadoes. Meanwhile, a slight risk is extended from south/central Texas and northward into east/central Kansas, most of Missouri, and southern Iowa. Across northern Oklahoma and eastern Kansas, a strong line of storms will likely initiate ahead of the front and will likely produce straight line winds and possibly a few spin up tornadoes as it quickly pushes eastwards. This line of storms will be a squall line, or technically called a Quasi-Linear Convective System (QLCS). The atmosphere will be unstable across this region, especially in the moderate risk area. When you add decent wind shear to this environment, storms will have a tendency to grow in size, and they’re likely to spin as well. 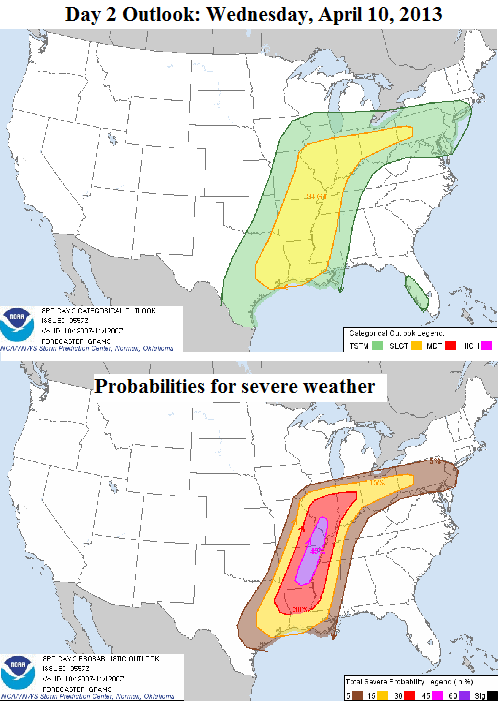 This storm system will continue to push eastward Wednesday and Thursday and continue to bring a chance of severe weather across a large majority of the United States. A line of storms will continue to develop and strengthen as they push eastward into Arkansas, Missouri, and southern Illinois. The main threat will be straight line winds with gusts as high as 70 miles per hour in some areas. A moderate risk has not been issued for this area, but if the main line becomes very organized and dangerous, then the Storm Prediction Center might upgrade this area to a moderate risk later this evening and into Wednesday morning. 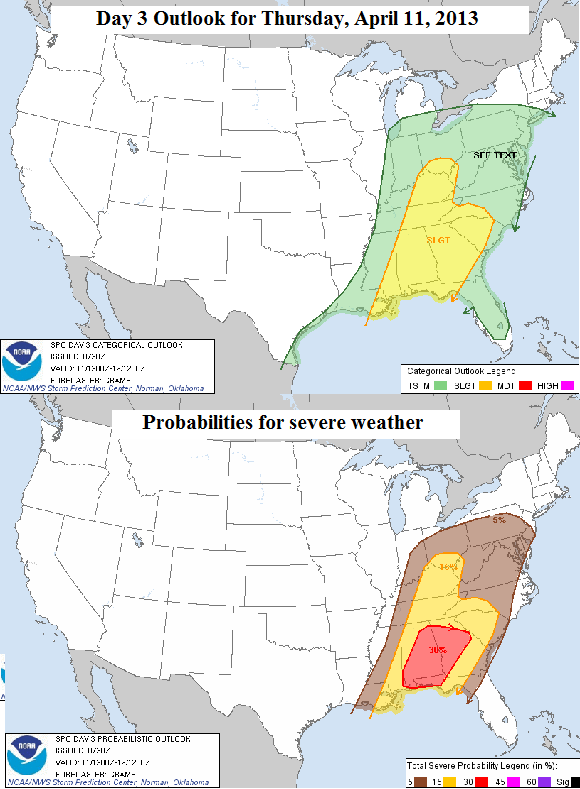 The front will be further east on Thursday, April 11, 2013 and should impact parts of the U.S. Southeast and Mid-Atlantic. The line of storms could re-intensify as the storms hit a slightly unstable atmosphere across the region. Temperatures in the Southeast have been running about five to ten degrees above average as temperatures have climbed into the 80s. The line of storms will continue to bring a threat for straight line winds and possibly a few spin up tornadoes as the system pushes eastward. Timing and intensity of these storms is still uncertain, although strong enough for the Storm Prediction Center to issue a slight risk for this region. 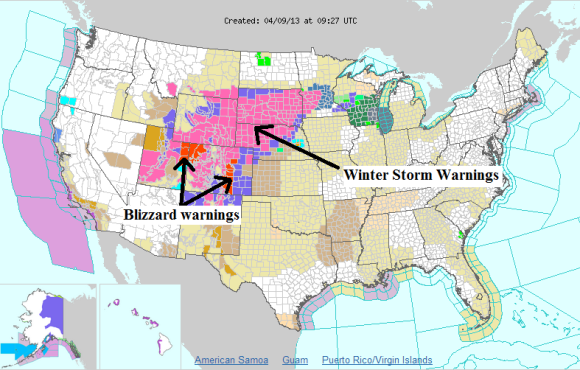 Winter weather is occurring across the mountain regions behind this strong system in early April 2013. Image via NOAA 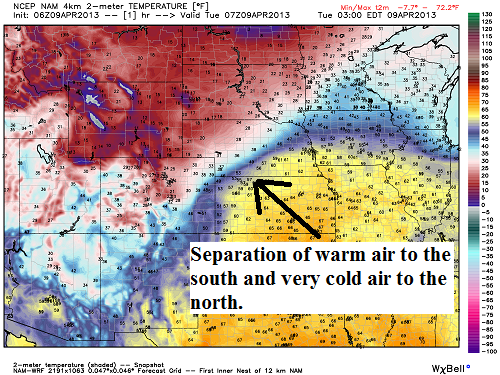 Cold air behind the front is bringing winter back across portions of the Northern Plains. Image via Weather Bell

Bottom line: A significant storm system is sweeping across the United States April 9 through 11, 2013 and will bring with it winter-like conditions in the Northern Plains and across the Rocky Mountains, and severe weather across the Central Plains and eventually into the Southeast U.S. Straight line winds and tornadoes are likely along this front as instability and wind shear increase. Everyone living in these areas should stay tuned to their local weather forecasts and have ways of being notified about severe weather either through a NOAA Weather Radio or a social media app.