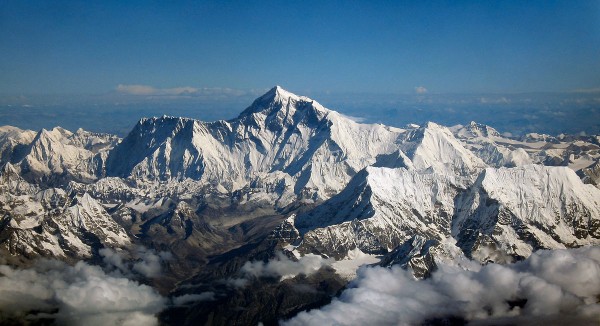 Geologists in China announced this week that the deadly magnitude-7.9 earthquake in Nepal on April 25 moved Mount Everest by 3 centimeters to the southwest. The quake – one of two large earthquakes to occur in Nepal this spring – left more than 8,700 people dead. China Daily reported on the findings of these geologists earlier today. China’s National Administration of Surveying, Mapping and Geoinformation published the geologists’ report on Monday (June 15, 2015).

Located on the border between China and Nepal, Mount Everest – highest mountain on Earth at 29,029 feet (8,848 meters) above sea level – is located where two of Earth’s great land plates, the Eurasian and Indian plates, meet. Thus the mountain is always moving, but large earthquakes can move it more suddenly. According to China Daily, the geologists’ report said that, during the past decade, the mountain moved nearly 16 inches (40 cm) to the northeast at a speed of 1.6 inches (4 cm) a year. The mountain rose about an inch (3 cm) at a speed of 0.1 inches (0.3 cm) a year.

The second quake in Nepal on May 12 – which measured magnitude 7.5 – didn’t move Mount Everest either horizontally or vertically, these geologists said.

Xu Xiwei, deputy head of the Institute of Geology at the China Earthquake Administration in Beijing told China Daily:

The mountain has been constantly moving to the northeast, and the earthquake made it bounce a little bit in the opposite direction.

The scale of such movement is normal and won’t affect life in the area.

The April 25 earthquake triggered an avalanche on Mount Everest, which killed 18 people and damaged climbing routes, causing authorities to halt all climbs for the rest of the 2015 season.

The 2014 season on Mount Everest ended prematurely as well, after the deadliest avalanche in the history of the mountain occurred on April 18, 2014. The 2014 avalanche knocked down at least 25 people who were climbing at an altitude of about 19,500 feet and killed 16 people, all of them employed as high-altitude climbing Sherpas.

Bottom line: The deadly April 25 earthquake in Nepal – one of two major earthquakes in Nepal this spring – moved Mount Everest by 3 centimeters to the southwest.