Scientists published results in a February 2012 issue of Nature that reveal a detailed picture of how Earth’s glacier regions have changed over the last eight years. In previous publications, GRACE satellite data confirmed that Earth’s polar regions are the major contributors to rising sea levels. The recent publication focuses on the high mountain areas, such as the Himalayas and Andes, and shows that these ecosystems are remarkably robust: they are not losing nearly as much water to the ocean as the polar regions.

Earth’s ocean levels are rising at a rate of 1.48 millimeters – about .06 inches – annually. This might sound like a small number, but actually equates to approximately 500 billion tons of water added to our oceans every year! GRACE scientists wanted to know for certain where this water is coming from. One of the central mandates of the GRACE satellite project – which has been making detailed measurements of Earth’s gravity since its launch in March 2002 – is to ascertain the source of the water being added to Earth’s oceans. 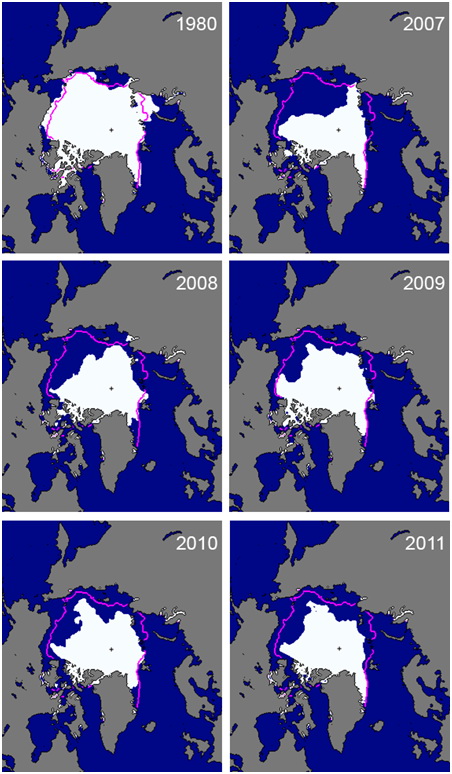 From simple visual evidence, if nothing else, it is clear that our polar glacier regions are depleting due to melting ice.

Meanwhile, exactly how much water is being lost by glaciers in high-mountain regions, including the Alps, Andes, the Himalayas among others? In the February 2012 Nature article, GRACE researchers report that the polar regions are losing 502 billion tons of water annually out of the total amount 536 billion tons lost annually worldwide. 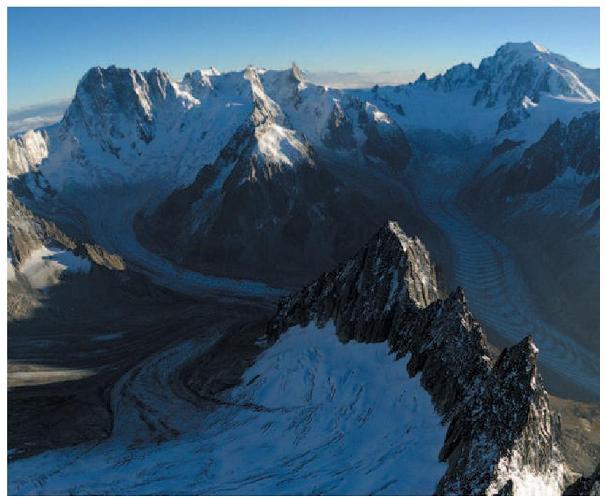 Glaciers in the Alps and other high mountain areas are not the greatest contributors to sea level rise, according to data from the two GRACE satellites. Courtesy of J. Balog, Extreme ICE Survey

Of course, this isn’t exactly the case. Earth is not exactly spherically symmetric. Instead, Earth is bulged along its equator as a result of its rotation. Mountainous regions also cause the planet to be slightly loop-sided. These deviations from perfect spherical symmetry cause slight alterations in the orbits of satellites around our planet. It is by experiencing these discrepancies in the orbits of satellites that GRACE is able to track minute variations in mass from place to place within our planet. 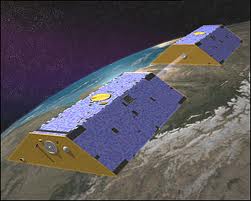 The GRACE project actually consists of two satellites, one following the other in orbit around Earth.

The GRACE project actually consists of two satellites, one following the other in orbit around Earth. The distance between them is measured by a radio frequency laser bouncing between the two satellites. This method of distance measurement, known as interferometry, utilizes the wavelength of the laser as its measuring stick and is capable of resolving a distance of a few micrometers over hundreds of kilometers. If the Earth were perfectly spherically symmetric, the distance between the satellites would remain constant. This is not the case however, and to complicate the picture even more, the mass distribution of our planet changes with time. It is exactly these time dependent processes that GRACE wishes to track.

The GRACE satellites are still transmitting data more than 10 years after the start of their mission. What’s more the mission has been multifaceted. For example, GRACE’s precise measurement of Earth’s gravitational field anomalies provide images of places where our planet’s tectonic plates – the great blocks of Earth’s crust that slide around slowly over very long timescales to create ocean basins and mountain ranges – are overlapping. In addition to providing data on mass loss to the oceans, the project – through its ability to track heat – has provided us with never before seen details of our ocean’s currents.

GRACE stands for Gravity Recovery and Climate Experiment. The project is headed by Dr. Bryon Tapley at the University of Texas.

Bottom line: A publication in Nature in February 2012 presents the results of an analysis of GRACE satellite data, showing that high mountain areas, such as the Himalayas and Andes, are not losing nearly as much water to the ocean as Earth’s polar regions.