Two new scientific studies suggest that ocean acidification – a change in the PH balance of Earth’s oceans, caused by increasing carbon dioxide concentrations in the atmosphere – will harm the ocean’s shellfish.

Ocean acidification refers to process by which the pH of the Earth’s oceans is decreasing due to the uptake of carbon dioxide by the ocean from the atmosphere. Since the 1800s, seawater pH has decreased from 8.2 to 8.1 largely due to industrial emissions of carbon dioxide. While a change of 0.1 pH units might sound small, the decrease actually represents a 26% increase in acidity. By 2100, the pH of the ocean could decrease by another 0.3 to 0.4 units.

Increasing ocean acidity can impair the ability of marine organisms to construct shells and skeletons made of calcium carbonate.

Scientists at the University of California at Davis tested what impact rising atmospheric concentrations of carbon dioxide would have on the development of mussel larvae whose shells are composed of calcium carbonate. The scientists chose to study the California mussel, Mytilus californianus, because it is a foundation species important to marine ecosystems along the northwestern coasts of North America.

Normally, over the course of 9 days young California mussels complete their larval development in the water column and settle to the bottom where they attach and grow into adult mussels. Mussel beds are hotspots for biodiversity because they provide habitat and refuge for hundreds of other species that live on exposed rocky shorelines.

Geoducks – the world’s largest burrowing clam, considered a delicacy in Asia. They are found along the Pacific northwest coast of North America. Image Credit: USDA/Flickr.

Lead author Brian Gaylord stated in a press release that “the observed ocean acidification induced decrease in shell integrity in M. californianus represents a clear decline in function” and warns that “such reductions may in fact be common in bivalves.” Weaker shells in larval mussels will likely make them more susceptible to predation and more prone to dessication.

The research by Gaylord and his colleagues regarding the effects of ocean acidification on larval mussels will be published in the August 1, 2011 issue of the Journal of Experimental Biology.

In a second study, scientists and policy experts from the Woods Hole Oceanographic Institution and the University of Miami examined what impact rising ocean acidity would have on global shellfish harvests. The study noted that declines in shellfish harvests could occur in 10 to 50 years and that the impacts would be greatest for poor, coastal nations due to their high dependence on protein from shellfish. The authors recommend that such countries should consider starting aquaculture programs that produce resilient shellfish species to help offset nutritional and economic impacts from reduced shellfish harvests in the wild.

The research by lead author Sarah Cooley and her colleagues regarding the effects of ocean acidification on global shellfish harvests was published on July 7, 2011 in an early online issue of the journal Fish and Fisheries. 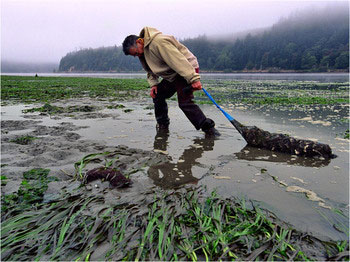 Both of the two new scientific studies that evaluated the impacts of ocean acidification on shellfish were funded in part by the National Science Foundation.