Blizzard ‘Nemo’ strengthening as it moves into U.S. Northeast

The nor’easter is currently evolving and growing in strength as it pushes closer to the U.S. Northeast this evening. 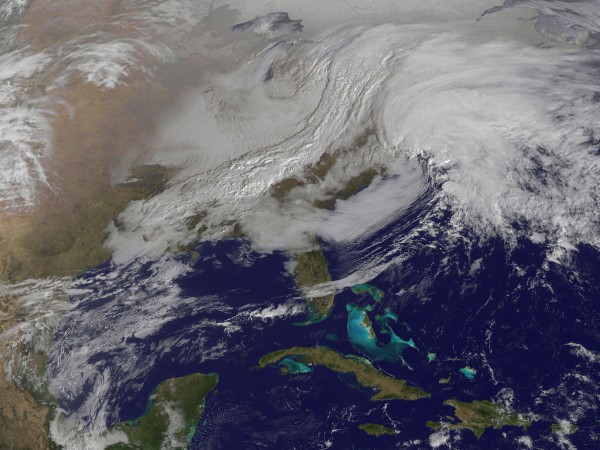 The two storm systems are merging into one nasty blizzard for the Northeast U.S. Image Credit: GOES/NASA

The nor’easter, named “Nemo” by the Weather Channel, is currently evolving and growing in strength as it pushes closer to the U.S. Northeast. New York Governor Andrew Cuomo has declared a state of emergency for the entire state of New York. Meanwhile, Massachusetts Governor Deval Patrick has banned cars on roads after 4 p.m EST. New York City could see a foot of snow as the storm intensifies later tonight, and totals will only increase as you travel north and east. Two to three feet of snow is possible from Connecticut, to Massachusetts, and through southwestern Maine. Storm surge of two to four feet is still expected with coastal flooding becoming a major concern. Further north, winter storm warnings and watches are in effect for much of Newfoundland. Many areas across the Northeast have already picked up two to four inches of snow. Some areas in Vermont are reporting nine inches of snow, and the event is just beginning! 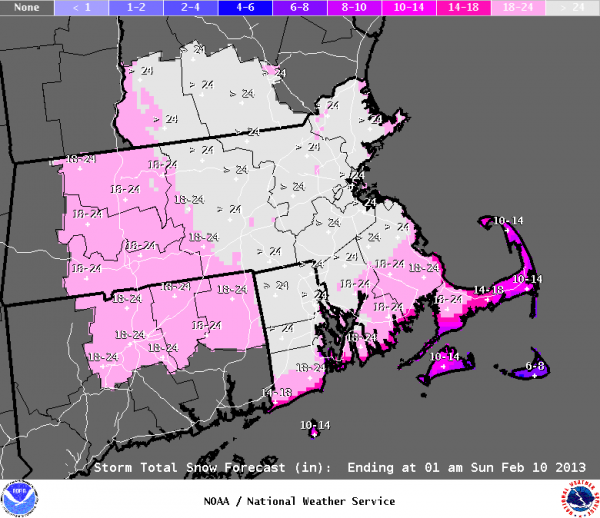 Boston NWS is indicating a large area of seeing greater than two feet of snow across Massachusetts.

The nor’easter is entering in a phase we call “bombogenesis”. When we talk about an area of low pressure bombing out, it means that a mid-latitude cyclone drops in surface barometric pressure by 24 or more millibars in a 24-hour period. Although this storm is not a hurricane, or warm-core system, it will likely have physical characteristics of one as it is possible that an eye could form around the center of the storm later tonight and into Saturday morning. The storm has already strengthened into a 984 millibar low, and the pressure will likely continue to fall tonight as the storm intensifies. Winds will begin to gust over 60 miles per hour and visibility will be near zero across the areas in the blizzard warnings. Three to four inches of snow could fall in one hour, making travel nearly impossible. Now is the time to stay at home and to avoid the roads! Conditions will continue to deteriorate as heavy snow and winds increase this evening. We will continue to provide updates as they come available. Stay safe if you live in these areas! 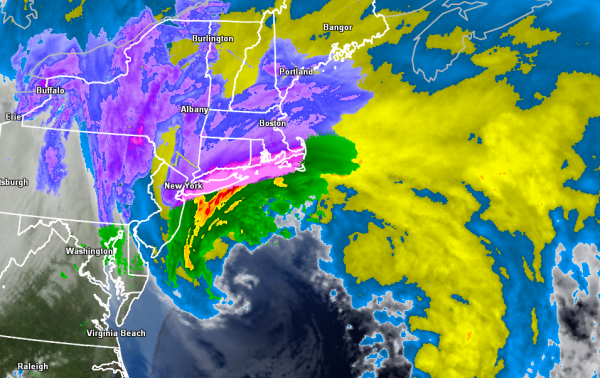 Image of infrared satellite with radar imagery at 5 p.m. EST. The pressure is falling and the storm is intensifying.

The northeastern United States is preparing for a monster storm, expected on February 8, 2013. It could easily produce over two feet of snow (.6 meters) and wind gusts over 60 miles (96 km) per hour, causing zero visibility and bringing cities to a standstill.

In many ways, we are looking at an historic storm that could paralyze cities such as Boston, Providence, and Hartford. We’re expecting blizzard conditions in eastern and southeastern Massachusetts, Connecticut, Rhode Island, Northeastern New Jersey, Long Island, southeastern Maine, and New York City. Moderate to major coastal flooding is also possible. Two storm systems will phase together to create a large pressure gradient that will result in winds sustaining around 35-50 mph with gusts over 74 mph. Tonight is the last night to get ready for a significant snowstorm that can be compared to the 1978 blizzard. 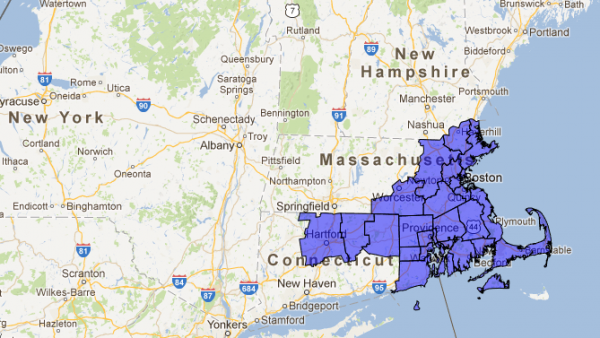 Blizzard warnings are in effect for parts of the U.S. Northeast. Image via Google/NWS

Blizzard warnings have been issued for eastern and southeastern Massachusetts, Connecticut, Rhode Island, northeastern New Jersey, Long Island, southeastern Maine, and New York City. A blizzard warning is issued when sustained winds or frequent gusts over 35 mph are expected with considerable falling and/or blowing and drifting snow. Visibilities will become poor or near zero with whiteout conditions at times. People who are outdoors might become lost or disoriented. You should remain indoors if you’re located in the warning area. 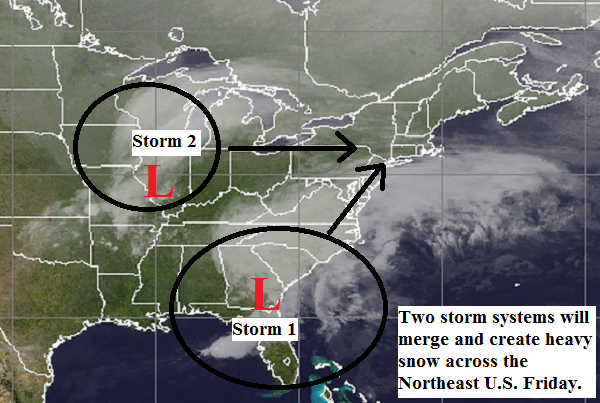 Two storms will merge to form a potentially historic blizzard on February 8, 2013. Image via CIMSS

There are two storm systems that will eventually merge into one storm, which will trigger the heavy snow, strong winds, and storm surge across the northeast U.S.

One system is located in the southeastern U.S. where significant rainfall totals of more than one or two inches have occurred over the past 24 hours. This system contains a lot of Gulf moisture that will greatly contribute to the heavy precipitation that’s expected to occur in the U.S. Northeast on Friday. This is a huge ingredient for a significant snowstorm because this area of low pressure will rapidly deepen as it interacts with storm #2 in the image above. 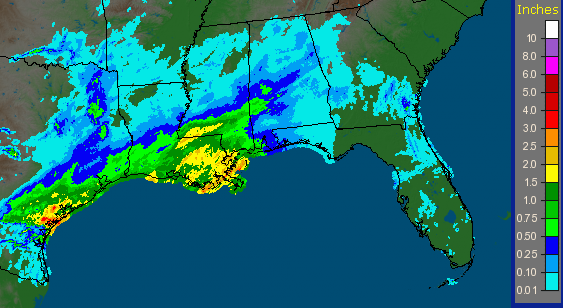 Rainfall totals on February 7, 2013 in the Southeast United States. Image via NOAA

The other form of energy is located across Illinois and Indiana this evening. Behind this system is very cold air with temperatures well below freezing. “Storm #2” as I will call it for referencing reasons only, will push to the east and merge with with the storm that is currently in the southeastern U.S. As they merge together, the pressure of the storm will drop and the winds will tighten up and increase. Cold air will be be reinforced and the warm Gulf stream that travels northward along the eastern coast of the United States will help this system to grow in size and deepen. Storm #2, also considered an Alberta Clipper, will bring the cold temperatures to this region. With a lot of moisture, cold temperatures, and an area of low pressure “bombing” out at the same time and place, it can only spell major trouble across the U.S. Northeast. 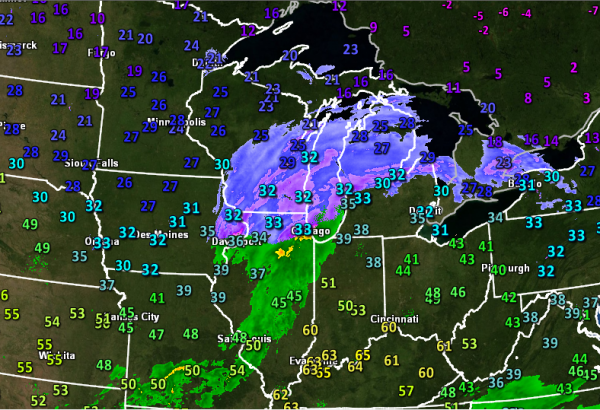 Cold temperatures and snow are associated with storm #2. It will merge into the storm in the southeastern U.S. and create a monster snowstorm for the U.S. Northeast.

NAM model showing what the radar could look like as these two storms merge into a monster snowstorm for the U.S. Northeast. Image via Weatherbell

Snowfall totals will be extremely high across the U.S. Northeast. Many areas could receive one to two feet of snow. Strong winds and blowing snow will make for near-zero visibility across the areas in the blizzard warning. Some wind gusts along the coast could exceed hurricane strength at 74 mph or higher. Along the Massachusetts coast, storm surge could approach two to four feet and cause major beach erosion and damage along the coast. Snow could fall as much as three to four inches per hour. If you live in a warned area in the Northeast, you should stay home and plan on losing electricity. 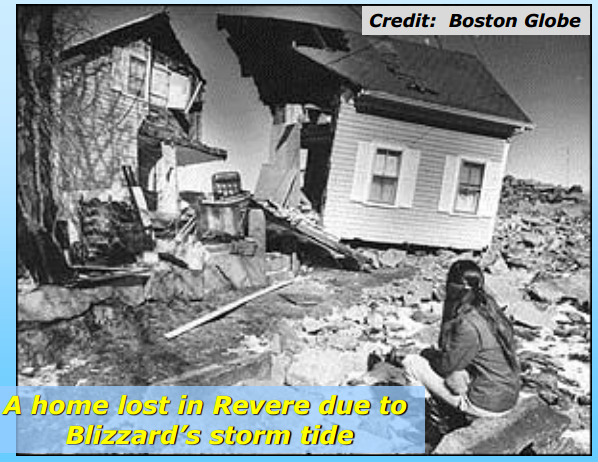 Storm surge caused a lot of damage in the historic Blizzard of 1978. Image via Boston NWS

The 1978 Blizzard caused major damage in the northeastern United States 35 years ago today. It resulted in $1.85 billion in damages (2010) and killed roughly 100 people. It paralyzed the northeastern coast of the U.S. and caused significant damage to beaches and homes. Back in the 1970s, weather forecasting was still young and had problems. In this case, the forecasts were really good in advance as meteorologists were able to predict that a blizzard would occur days in advance of the storm. But the general public did not buy into the hype, and that was what created mass confusion, deaths, and left many people stranded in their cars without any heat or food. Snowfall totals exceeded 30 inches in some spots. Boston, Massachusetts recorded 27.1 inches of snow during the Blizzard of 1978. It is very possible that this developing storm could match the snowfall totals experienced in the 1978 storm Friday. The overall setup for this upcoming blizzard is similar to the 1978 blizzard as two storm systems (areas of low pressure) merged together off the northeast coast to create damaging winds, storm surge, and heavy snowfall. For images and a description of this entire event, check out Boston’s NWS page. 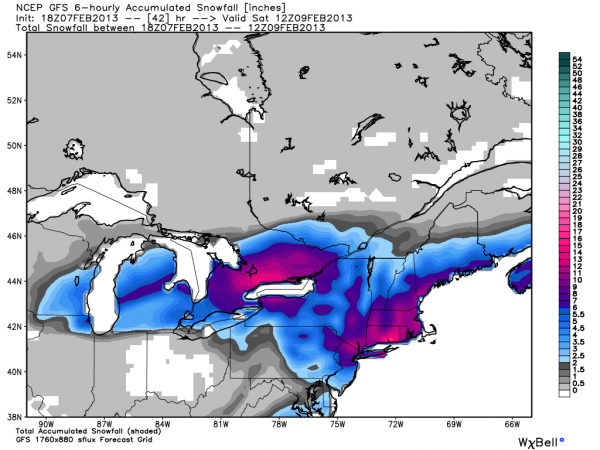 Bottom line: Major snowstorm Nemo will develop Friday, February 8, 2013 across the northeastern United States. Snowfall totals could easily exceed two feet in some areas, especially near Boston, Massachusetts. Winds will be very strong with sustained winds of around 35-50 mph in the blizzard warning areas. Gusts could easily exceed hurricane force strength of 74 mph or higher. Residents are warned to be prepared for significant power outages. Make sure you keep plenty of food and water inside your homes and even in your cars if you do plan on commuting. All motorists are urged to avoid the roads as visibility could be near zero thanks to the possibility of heavy, blowing snow. People along the coast can expect storm surge of one to four feet (about a meter) that could cause flooding and damage. Please follow your local National Weather Service offices for the latest updates. Stay warm, stay safe, and avoid the roads at all costs!