Climate change and illegal logging in Mexican forests, where the monarchs spend the winter, may be contributing the decline of monarch butterflies.

The concern about the disappearance of monarch butterflies has intensified. In the northern spring of 2013, conservation organizations reported that the amount of Mexican forest the butterflies occupied was at its lowest in 20 years. The World Wildlife Fund, in partnership with a Mexican wireless company and Mexico’s National Commission of Protected Areas, found nine hibernating colonies occupied almost 3 acres during the 2012-13 winter, a 59% decrease from the previous winter. Illegal logging in the Mexican forests, where the butterflies spend the winter, is being blamed for the shrinking acreage. Climate change is also thought to contributing to the butterfly population crash; it is causing the disappearance of milkweed, the only plant on which monarchs lay their eggs and on which their caterpillars feed. Monarch butterfly populations are known and loved for their beauty and long-distance migrations. Follow the links below to learn more about monarch butterflies.

An August 22, 2013 article in USAToday discusses ongoing fears that the monarch butterfly population may be crashing. The information above came from USAToday’s article.

Barbara Kingsolver’s 2013 novel Flight Behavior is set against a background of the monarch butterfly decline.

Some people are trying to save the monarchs, by planting habitats for them.

Monarch Watch is a citizen group concerned about the butterflies. 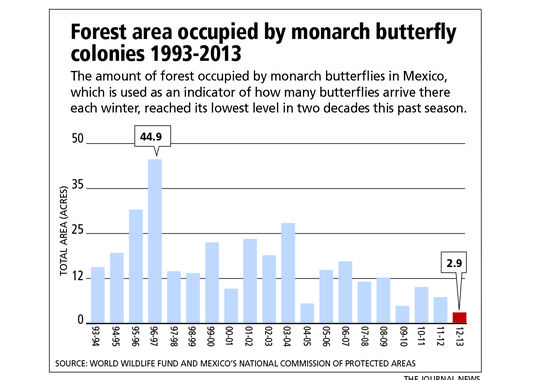 The number of acres that monarch butterfly colonies occupied this past winter in the Mexican forest was at a 20-year low. Photo and caption via The (Westchester County, N.Y.) Journal News via USAToday. 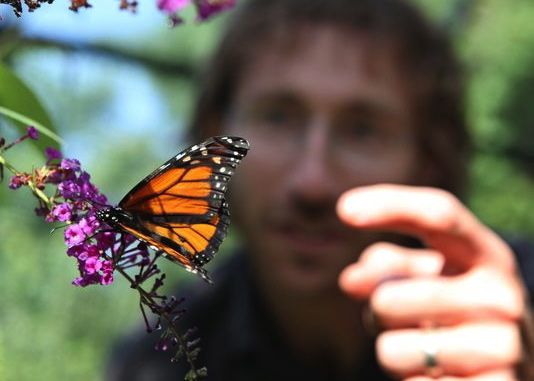 Travis Brady is director of education and living collections at Greenburgh Nature Center in Greenville, NY. He is featured in an interesting video at USA Today, talking about what monarchs need and why their population is thought to be declining. Photo via Joe Larese, The (Westchester, N.Y.) Journal News via USAToday.

Bottom line: Monarch butterfly habitat in Mexican forests is at a 20-year low, due, it’s thought, to illegal logging. Climate change may also be contributing to the butterflies’ demise.