They were working with spacecraft data, using a new technique to analyze it. They found a new type of magnetic event in the realm just beyond the boundary of Earth’s magnetic field.

Space scientists recently uncovered a new type of magnetic event in the near-Earth environment. The new event happens just outside the outer boundary of Earth’s magnetosphere – the sphere around Earth within which our world’s magnetic field is the dominant field – in a region called the magnetosheath. Scientists using an innovative technique to squeeze extra information out of existing data learned that a process known as magnetic reconnection takes place in the magnetosheath. They reported their new discovery in a study in the peer-reviewed journal Nature on May 9, 2018. 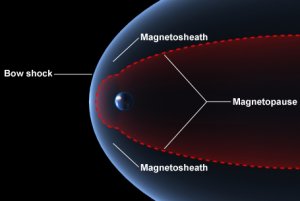 Earth moving through space, with parts of its magnetosphere and magnetosheath labeled, via David Darling.

Before you shake your head and move on, consider this. Consider the famous Halloween Storms of the year 2003. They weren’t ordinary rain storms, but geomagnetic storms high in Earth’s atmosphere, triggered by massive solar flares erupting on the sun, which had sent X-rays zooming through our solar system. Along with the flares, the sun expelled giant clouds of solar material, called coronal mass ejections, or CMEs. The CMEs slammed into Earth’s magnetic field and pushed material and energy in toward Earth, creating the Halloween Storms, which caused brilliant auroras that could be seen as far south as Texas. NASA also said the 2003 solar storms:

… interfered with GPS signals and radio communications, and caused the Federal Aviation Administration to issue their first-ever warning to airlines to avoid excess radiation by flying at low altitudes.

Every step leading to these intense storms – the flare, the CME, the transfer of energy from the CME to Earth’s magnetosphere – was ultimately driven by the catalyst of magnetic reconnection. 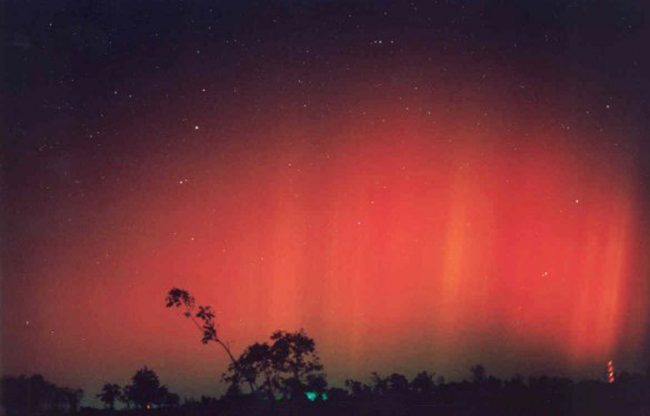 To a solar physicist, magnetic reconnection was the ultimate process driving the 2003 Halloween solar storms, which were so powerful that people saw auroras (northern lights) as far south as Texas and Florida. Christie Ponder captured this aurora image near Houston, Texas, on October 29, 2003. Image via NASA.

Plasma is a form of matter in which electrons wander freely among the nuclei of atoms. It’s been called a fourth state of matter, the other three being solid, liquid and gas. Tai Phan in the Space Sciences Laboratory at the University of California, Berkeley, and lead author on the paper, commented:

In the plasma universe, there are two important phenomena: magnetic reconnection and turbulence. This discovery bridges these two processes.

Scientists have seen magnetic reconnection many times in Earth’s magnetosphere, but usually under calm conditions. The new event – found in data from NASA’s Magnetospheric Multiscale Mission, or MMS – was in the magnetosheath, where the solar wind is extremely turbulent. NASA said:

Previously, scientists didn’t know if reconnection even could occur there, as the plasma is highly chaotic in that region. MMS found it does, but on scales much smaller than previous spacecraft could probe …

Compared to standard reconnection, in which broad jets of ions stream out from the site of reconnection, turbulent reconnection ejects narrow jets of electrons only a couple miles wide.

That is why MMS scientists had to:

… leverage the design of one instrument, the Fast Plasma Investigation, to create a technique to interpolate the data — essentially allowing them to read between the lines and gather extra data points — in order to resolve the jets.

Amy Rager, a graduate student at NASA’s Goddard Space Flight Center in Greenbelt, Maryland, and the scientist who developed the technique, said:

The key event of the paper happens in only 45 milliseconds. This would be one data point with the basic data. But instead we can get six to seven data points in that region with this method, allowing us to understand what is happening.

Using this new method, the MMS scientists said, they’re hopeful they can comb back through existing datasets to find more of these events … and potentially other unexpected discoveries as well.

Read more about this new study from NASA.

Earth is surrounded by a protective magnetic environment — the magnetosphere — shown here in blue, which deflects a supersonic stream of charged particles from the sun, known as the solar wind. As the particles flow around Earth’s magnetosphere, it forms a highly turbulent boundary layer called the magnetosheath, shown in yellow. Scientists, like those involved with NASA’s Magnetospheric Multiscale mission, are studying this turbulent region to help us learn more about our dynamic space environment. Video via NASA’s Goddard Space Flight Center/Mary Pat Hrybyk-Keith; NASA Goddard’s Conceptual Image Lab/Josh Masters