Millions felt the heat this past weekend

The central and eastern United States were sweating it out as high temperatures soared over 100 degrees Fahrenheit last weekend (July 18-24) – affecting millions of people.

An area of high pressure anchored across much of the eastern half of the United States played a major role in a heat wave to remember as temperatures rose above 100 F and brought heat indexes over 115 F in many areas.  The National Weather Service issued excessive heat warnings and heat advisories for over 30 states, as high pressure slowly pushed eastward. 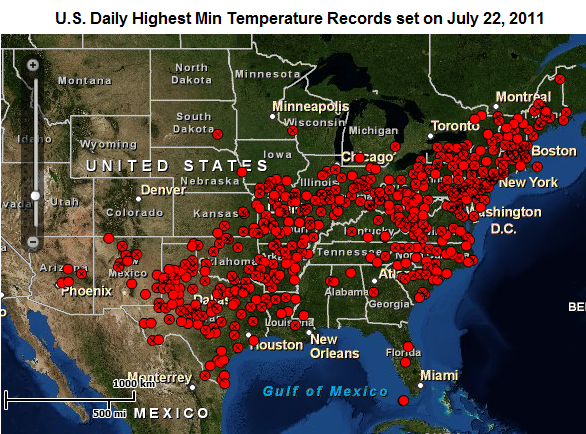 On July 18, Newton, Iowa reached 99 F with a dewpoint of 84 F, which made the heat index rise to 130 F. The heat index is a scale that uses actual air temperature and dewpoints to determine what it feels like outside.  The heat index climbs as dewpoints increase.

Newark, New Jersey recorded an all-time record high of 108 F on July 22, 2011. The original record was 105 F, set back on August 9, 2001.  Along with above-average temperatures, high dewpoints in the 70s and 80s created high heat index values over 115 F across parts of the Northeast.

Finally, let’s not forget our friends across the southern/central United States as high temperatures remain well into the 90s and 100s. Dallas/Fort Worth International Airport in Texas has had 31 100 F days, and 24 consecutive days at 100 F or higher. Currently, the average high in July of 2011 is 101.7 F. Typically for this time of year, the Dallas/Fort Worth Metroplex has high temperatures in the mid-90s, which means they have been 5-10 degrees above average.

Thankfully, temperatures have cooled below advisory levels for the areas impacted by the heat. However, above-average temperatures still plague parts of Texas, Oklahoma, Kansas, Arkansas, and Missouri.

Millions of people across the United States have experienced the heatwave, which has killed more than 20 people since July 19, 2011. Unfortunately, summer has another two months to go before the weather begins to transition into autumn. Until then, stay hydrated if you plan to do any physical activity in the heat.