Research at one of the world’s clearest, cleanest lakes suggests the problem of microplastics is widespread in freshwater systems and not just in oceans.

From the infamous garbage patch islands of floating plastic to the guts of fish and bellies of birds, plastic pollution of all sizes is ubiquitous and well-documented in Earth’s oceans.

Now, research at one of the clearest, cleanest lakes in the world – Lake Tahoe, on the California/Nevada border – suggests that the problem is also widespread in freshwater systems.

Katie Senft is a staff researcher at the UC Davis Tahoe Environmental Research Center. Senft began sampling beaches last summer, and continued this summer, in the first study of microplastics in Lake Tahoe. The research team found microplastics – that is, plastic fragments less than 5 mm (.2 inches) in length – at every beach they sampled. Senft said in a statement:

The ocean gets a lot of attention about plastic in the water, and our freshwater lakes don’t. This issue has flown under the radar in the Tahoe Basin.

When plastics enter the environment, be it terrestrial or aquatic, they stick around for a long time. We don’t know the long-term implications of having plastics in our water and in our soil. 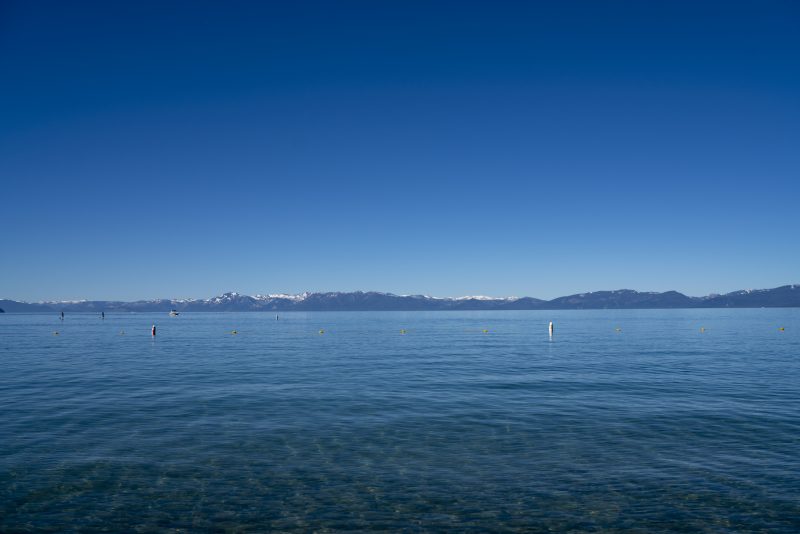 To look for microplastics, the team scoops sand into glass mason jars at defined distances across the lake’s shoreline. Back at the lab, the samples are analyzed under a microscope for plastics.

The microplastics we’re finding at Lake Tahoe are most likely from improperly disposed trash.

Residents and visitors can help, Sendt said, by reducing the amount of plastic brought to the beach from the beginning. Lake Tahoe has some of the nation’s cleanest drinking water, so foregoing the packs of small plastic water bottles for a reusable one is an easy place to start.

Bottom line: Researchers are finding microplastics in the water of Lake Tahoe.