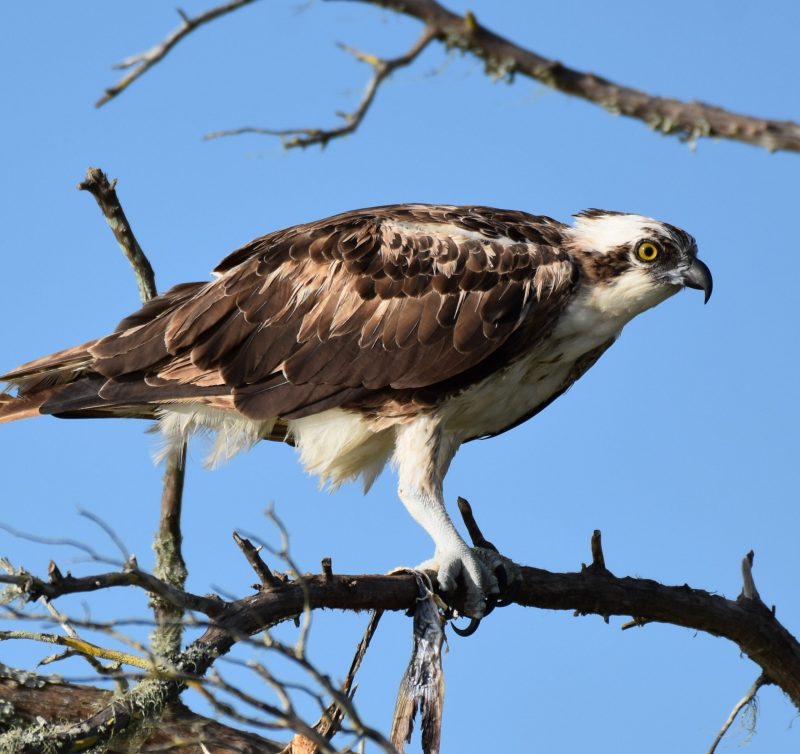 Ospreys, like the one pictured here, are among the types of birds of prey in Florida that have been found to be accumulating microplastics in their stomachs. Image via Linda Walters/ University of Central Florida.

A new study has found, for the first time, the presence of microplastics in the digestive systems of terrestrial and aquatic birds of prey in Florida, including hawks, ospreys and owls.

Microplastics are not a specific kind of plastic, but rather any type of plastic fragment that is less than 5 mm in length – less than the size of a pencil tip. They enter natural ecosystems from a variety of sources, including cosmetics, synthetic clothing, and industrial processes.

The accumulation of microplastics in birds’ digestive systems could lead to poisoning, starvation and death, according to the study, which was published online in the journal Environmental Pollution. University of Central Florida biologist Julia Carlin is the study’s lead author, said that birds of prey are critical to a functioning ecosystem:

Birds of prey are top predators in the ecosystem and by changing the population or health status of the top predator, it completely alters all of the animals, organisms and habitats below them on the food web.

Past studies have documented increasing amounts of microplastics in the guts of fish, marine birds, and filter-feeding invertebrates, such as oysters. There have also been recent reports of whales dying from eating dozens of pounds of plastic, including plastic bags. However, birds of prey have not been thoroughly examined before, partly due to their protected status. The researchers for the new study were able to overcome this by working with the Audubon Center for Birds of Prey in Maitland, Florida, a rehabilitation center that helps injured raptors.

With the center’s permits, the researchers were able to examine the stomach contents of 63 birds that were dead when they arrived at the center or died 24 hours after they arrived. Using dissecting microscopes and spectroscopy, the researchers found microplastics in the digestive systems of all birds examined.

The most common types of microplastic in the birds were microfibers, which accounted for 86% of the plastics found. Microfibers can come from synthetic ropes or clothing and may end up in ecosystems through wastewater from clothes-washing machines.

Study co-author Linda Walters, of University of Central Florida, suggested some solutions to the problem could be removing plastic from open landfills, carefully discarding plastic trash, buying natural fabrics instead of plastic-based ones, and retrofitting water treatment plants and stormwater drains to capture microplastics. Walters said:

We have all benefitted from the convenience of plastics, but plastics do not go away once produced.

Bottom line: A new study has found microplastics in birds of prey – including hawks, ospreys and owls – in Florida for the first time.

Source: Microplastic accumulation in the gastrointestinal tracts in birds of prey in central Florida, USA