Megalodon shark’s enormous babies ate their siblings in the womb

Megalodons – the extinct giant sharks that lived in most of Earth’s oceans about 3 million years ago – gave birth to babies that were larger than adult humans, scientists say. 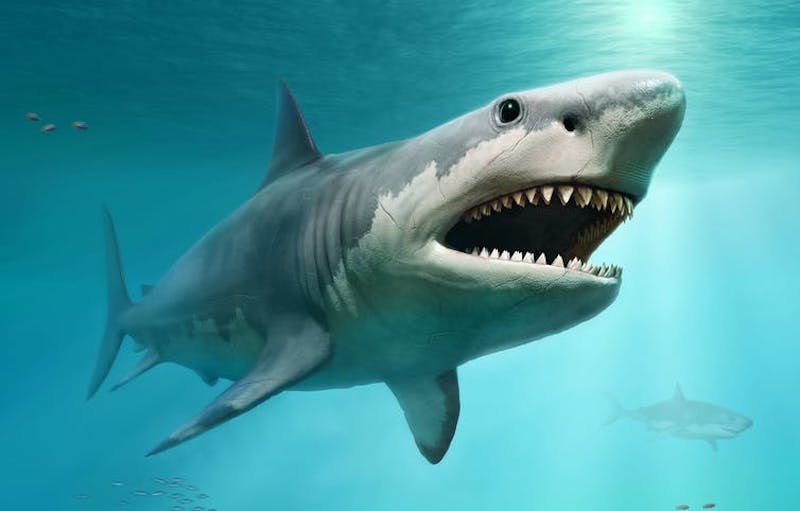 Megalodons are the biggest predatory sharks ever discovered. Image via Shutterstock.com.

By Tom Fletcher, University of Leicester

Made famous by the 2018 blockbuster “The Meg,” the largest predatory shark ever discovered, the megalodon, is a bit of a mystery. We know it lived between 15 and 3.6 million years ago and it reached at least 45 feet (14 meters) in length, more than double the size of an adult great white. But learning any more about the giant shark requires a bit of detective work.

Because of its soft cartilaginous skeleton, only a few parts of the shark’s body are mineralized and preserved, including its teeth, skull and spine. This means the fossil record is very poor for this animal. Unsurprisingly, the predator’s 7-inch (17-cm) teeth have received a lot of attention from researchers. But in a newly published study, Professor Kenshu Shimada of DePaul University and colleagues sought clues elsewhere.

By examining the spine of the now extinct megalodon, the team found it gave live birth to babies 6.5 feet (2 meters) long, larger than an average adult human. Exactly how the babies got so big was likely due to cannibalism, eating their unhatched siblings in the womb.

Secrets in the spine

Like humans, sharks have a spine made up of lots components called vertebrae, which grow as the animal gets older. The researchers measured the vertebra of a megalodon from the Miocene epoch, which lasted from 5 to 23 million years ago.

By comparing it to modern great white sharks, the team estimated that the megalodon it came from was around 30 feet (9 meters) long when it was alive, but they didn’t stop there. Sharks deposit rings of hard tissue on their vertebra each year, and like the trunk of a tree these can be used to estimate age.

To count these rings inside the scientists would have had to cut through the fossil, damaging it forever. The solution was to use detailed X-ray scanning to study the internal structures, without causing any harm to the priceless specimen, revealing this shark died when it was 46 years old. 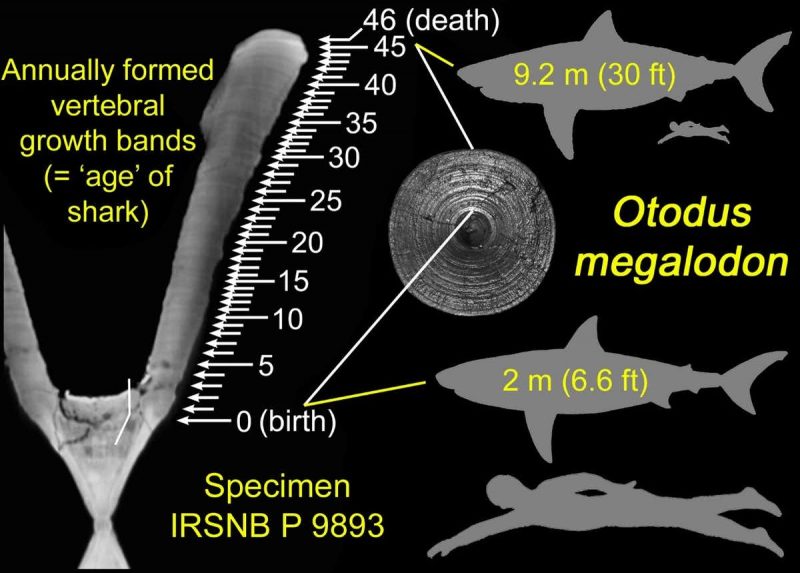 Megalodon babies grew bigger than adult humans by eating their siblings in the womb. Image via DePaul University/ Kenshu Shimada/ The Conversation.

Looking down through the layers, the team could see how large this vertebra was when the shark was born. Astonishingly, the size estimate at the first growth ring imply the shark was two meters (over 6 feet) when born, meaning it was larger than an average adult human at birth.

Some sharks lay eggs, while others give birth to live young. In most sharks, however, the eggs hatch inside the mother, where the young feed on the egg yolk and fluids that she secretes until they are born fully formed.

The enormous birth size estimate for this particular megalodon provides strong evidence that this species had the same reproductive mode, with a great deal of investment in a smaller number of huge offspring. The dark secret of the megalodon is that to achieve this size in the uterus, the developing young must have been eating a lot.

It is very likely, this new study argues, that the babies’ growth was fueled by cannibalism of their unhatched siblings, a sinister conveyor belt of high protein snacks for hungry pups.

It is unknown exactly how many megalodon embryos were produced. In basking sharks today, millions of eggs are created and sent to be fertilized. The hatched embryos begin to eat the surrounding eggs and in some cases, like the sand tiger shark, they eat other embryos too. Sharks can hold one or more pups in each of their two uteri, so it is likely at least two megalodons were born at a time.

This grim survival mechanism is not unique. All living sharks of the lamniform order, a group which includes great white, mako, and thresher sharks, use this strategy, which has existed for at least 70 million years.

This study also conservatively estimates the life expectancy of the species at 88-100 years old, using their spine data and well-established growth patterns of the teeth. This is in line with estimated ages for great white and whale sharks, only falling short of the record breaking 500-year-old Greenland sharks, known to live life in the slow lane of cold northern seas.

It seems the start of a megalodon’s life was a tale of two halves. They were protected by a wonderful mother sacrificing time and energy to her pups, while they wrought havoc in the womb.