It now seems possible that 2014 could become the hottest year on record, if the trend from the first five months continues.

Departure from average temperatures during May, 2014, via NASA Goddard Institute for Space Studies.

Temperature data for May 2014 are in from two leading trackers of global temperatures, and preliminary results from both organizations show May 2014 as the warmest May on record. NASA data show that May 2014 had an average global temperature that was 1.38 degrees Fahrenheit above the long-term average. The Japanese Meteorological Agency’s separate analysis also found both May and the meteorological spring months of March, April and May to be the warmest on record. Some climate sites are already saying that 2014 has the potential to become the hottest year on record, if the trend from the first five months continues.

Later this week, the National Oceanic and Atmospheric Administration (NOAA) is expected to release its global numbers. They typically match the others, but we’ll see.

The El Niño that now seems to be developing in the Pacific likely will boost global average temperatures further, if it develops fully.

Of course, the way we experience climate and weather is very local. EarthSky is in Texas, which had a colder-than-average May 2014. 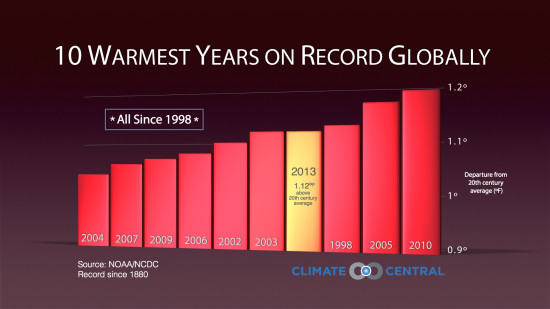 Last year, 2013, was the fourth-warmest year on record. Note that the 10 warmest years on record have all occurred in the past 16 years.

Bottom line: Two leading trackers of global temperatures – NASA and the Japanese Meteorological Agency – say that May 2014 was the warmest May on record. NOAA is expected to release its data for May later this week.