Map: Where the trees are

The darkest greens reveal the areas with the densest, tallest, and most robust forest growth across the U.S.

Where are our trees here in the United States?

The map below depicts the concentration of biomass — a measure of the amount of organic carbon — stored in the trunks, limbs, and leaves of trees. The darkest greens reveal the areas with the densest, tallest, and most robust forest growth across the U.S. 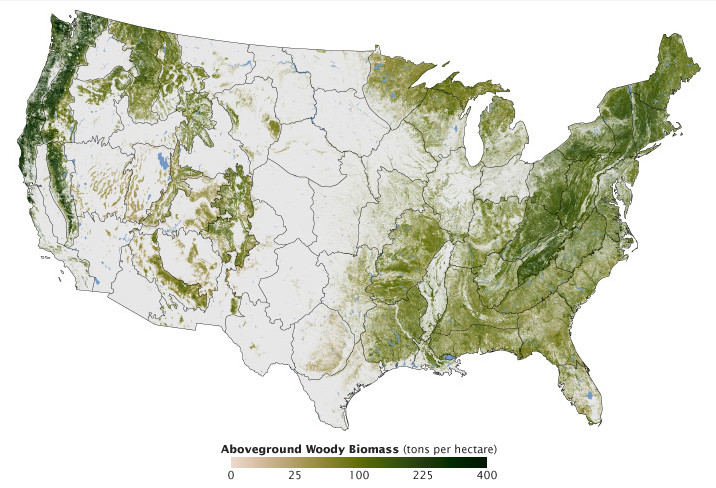 Over six years, researchers assembled the national forest map from space-based radar, satellite sensors, computer models, and a massive amount of ground-based data. It is possibly the highest resolution and most detailed view of forest structure and carbon storage ever assembled for any country.

Josef Kellndorfer and Wayne Walker of the Woods Hole Research Center (WHRC) worked with colleagues at the U.S. Forest Service and U.S. Geological Survey to build the map, released in 2011, using the National Biomass and Carbon Dataset (NBCD).

Forests in the U.S. were mapped down to a scale of 30 meters, or roughly 10 computer display pixels for every hectare of land (4 pixels per acre). They divided the country into 66 mapping zones and ended up mapping 265 million segments of the American land surface. Kellndorfer estimates that their mapping database includes measurements of about five million trees.